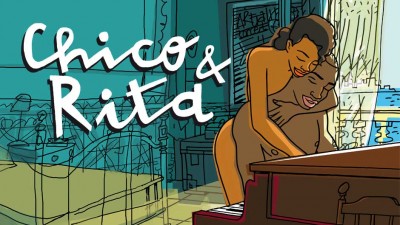 Spain's Chico & Rita is a collaborative filmmaking effort from directors Tono Errando, Javier Mariscal, and Ferando Trueba. Trueba is the filmmaker with the most previous experience under his belt: He's a previous winner of the award for Best Foreign Language Film from the Academy Awards for The Age of Beauty (1992). Chico & Rita is a combination of romance, jazz music (including some animated "cameos" by famous jazz legends), and the culture history of 1940's Cuba. Chico & Rita is a dramatic animated film aimed at adults with an interest in those unusual aspects for an animated project.

Chico & Rita is a story about a man named Chico and a woman named Rita. The story is in the title of the film itself. This is a romantic drama about the mishaps facing two would-be lovers as the pair meet and fall in love before finding a great deal of trouble in their unusual relationship with every turn in their romantic journey. Both are musicians, suave, and heading down a path that differentiates from the other in the professional sense: nothing is the same for them as they both advance in varied ways in their musical career ambitions and opportunities.

Over the course of the film, these career changes lead them both into becoming torn apart from one another, and that's not even describing all of the relationship woes plaguing the jazzy duo. Rita isn't exactly fond of how quickly he turns to another woman after thinking that it might be over with her because of a chance meeting with an elite Hollywood producer. As all of this occurs, the main idea I think the filmmakers want audiences to consider is the following: Can Chico and Rita overcome the evolving careers, opportunities, and relationship problems they both find themselves having to face? Could they find each other together again, with love, and with genuine happiness by the conclusion?

These questions are the main ones asked during the entire film. The filmmakers want to ask viewers to consider the characters relationship and to wonder about how a successful relationship between the pair might be possible in this kind of story. This film subtly asks questions about what obstacles a love that is true can overcome and it makes it an emotionally-charged concept.

Unfortunately, I had some major qualms with the film. The main area of disappointment came in the style of the animation. While there are some beautiful and transcendent scenes in Chico & Rita (and there absolutely are), I found that the moments where the animation was spectacular was when it focused on landscapes, skylight, vibrant colors, and other backdrops. It was in those areas that the animation impressed. 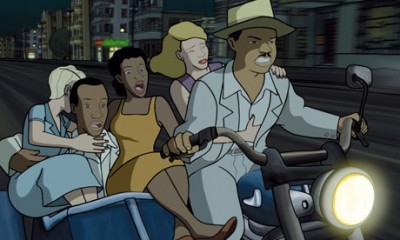 However, I was not a fan of the character designs and the apparent lack of ability for the animation employed to effectively create animated facial expressions, movement, and elements that provide greater depth and dimensionality to characters. I found the designs to be seriously lacking with this important area. It created a barrier where the characters felt lacking in "animated realism", causing these characters to become more difficult to recognize as characters and not just as artful drawings. These character designs and expressions made the art seem incapable of suggesting the characters emotions. This is something that was detrimental to the animation.

The story itself has moments of beautiful transcendence. There are moments of elegance, romance, and passion of music, people, and life. I thought the structure was somewhat mundane despite an obviously ambitious tone to the storytelling though. Chico & Rita was without structural challenges and the film mainly molded a story out of some "tried and true" story elements utilized in many past productions. This technically worked well, but only to the extent that I was interested in the story. I was never the invested audience member that the filmmakers were hoping to find.

The absolute BEST thing about Chico & Rita is the music. The music helped to elevate so many scenes. There were plenty of times when I thought "If the music was removed, would I enjoy these moments anywhere near as much?" The answer... probably not. The visual dance numbers and music blended really well but the music was the best aspect of these moments. Grammy winning artist Bebo Valdes contributed the score and selections are used from famous Jazz musicians like Thelonious Monk, Tito Puente, Charlie Parker, Woody Herman, Cole Porter, and others.

Chico & Rita deserves props for being one of the most artistically different animated movies of recent years, because it never feels like something that is aiming to fit a particular mold. It's just too bad the filmmaking relied on storytelling props and that the animation lacked in convincing character designs. This is an animated film aimed squarely at adults, but I would rather watch something from Disney or Pixar or Studio Ghibli than ever re-watch Chico & Rita. The animation in this film was disappointing to that degree and the storytelling (while interesting and reaching some quality moments that shined) is something that just feels a tad too unoriginal. 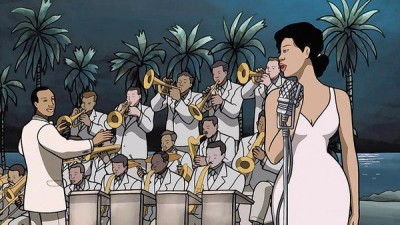 Chico& Rita is a visually stunning film in terms of technical merits. The 1080p presentation is flawless. It really is one of the best examples of how the Blu-ray format can help to create a great presentation for something. The colors, the animation style (which utilized a 3D style of animation rendering that isn't a common technique), and the overall depth to the image is amazing.

The audio is also incredible on this release. It captures the classic Jazz music with the Cuba backdrop so well that it surprised me. I was impressed by the way the sound design was able to reproduce some of the best artists in Jazz with such clarity. The dialogue is clean and easy to understand while the design utilized for the surrounds impressed. This is a quality audio presentation with noteworthy 5.1 DTS-HD Master Audio.

The following supplements are included: Director's Commentary with Javier Mariscal and Ferando Trueba, a 30 minute long "Making-Of Chico & Rita" featurette that explores the animation, music, and more areas of filmmaking, and the films trailer promoting the release.  The Special Edition Blu-ray release also includes an excerpt of the graphic novel, a DVD copy of Chico & Rita, and the score by Grammy Winning artist Bebo Valdes on CD. The CD is my favorite inclusion. I wish more releases included the music inside of the package and it really is a treat to have it with the film in one collector's release of the film. Slipcover fans might also be pleased to learn that the release has a nice highest-quality glossy slipcover. 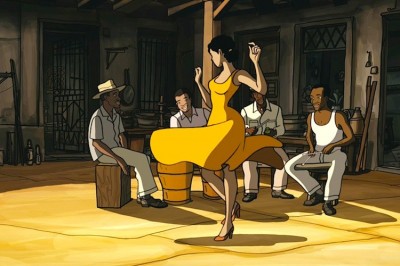 Chico & Rita is an ambitious film and one that will delight many viewers because of its different take on an animated storyline, the Jazz-infused music, and the romance between the two animated characters who represent the title of the film itself. However, I found the film to be somewhat underwhelming. It was enjoyable while I watched it but the whole never seemed to represent something I found entirely satisfying. I recommend most viewers rent the movie before making a purchasing decision.

If it does turn out to be a movie you love, well, this is an excellent Blu-ray release and the inclusion of the original score soundtrack is a delightful aspect to this release that fans of the film will appreciate.