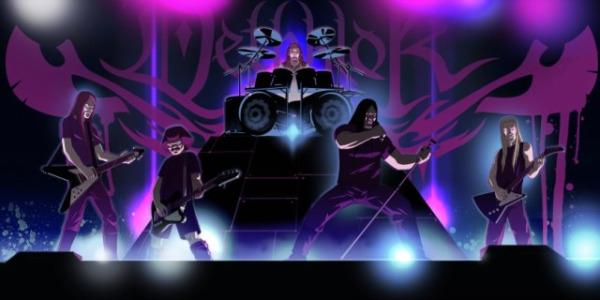 Metalocalypse is still funny. In fact, it's funnier in this fourth season than it was in the third. Part of that renewed success may have to do with a return to the shorter 15-minute format of it first and second seasons. The third took on the challenge of 30-minute episodes with mixed results. Metalocalypse had comfortably settled into the shorter length, having mastered certain rhythms that worked well. By doubling the episode length, creators Brendon Small and Tommy Blacha condemned themselves to dealing with a completely new episode structure without losing all the terrific character and plot work they had done in the previous seasons. As one might expect, that season was only a qualified success, with episodes feeling bloated and, at the same time, underdeveloped.

The fourth season is a return to earlier excellence, finding the creators back in much more comfortable creative territory. Unlike previous seasons, the third did not end with a cliffhanger, so the fourth begins "fresh," with a mystical, ominous voiceover by none other than filmmaker Werner Herzog (who makes vocal cameos throughout the season). Dethklok has returned, resurgent: the band's fortress/castle/home, Mordhaus, is now fully renovated. Their new album is about to hit the streets. The band is, once again, in a position of great global power and influence, which worries the secret cabal of global leaders (The Tribunal) that monitors Dethklok's every move. In this season, we learn a bit more about The Tribunal and why they take such a keen interest in the band.

Small, Blacha, and their collaborators bring impressive knowledge and care to the show. The world of Metalocalypse is thoroughly imagined and designed, informed by a lifelong love of metal, and an understanding that there is something deeply and inherently satirical at the heart of this often marginalized form of music. The show's careful preparation is demonstrated by the band's five variegated members: the growling but sensitive lead singer Nathan Explosion, the crude and insecure bassist William Murderface, the sexually prolific lead guitarist Skwisgaar Skwigelf, the childlike rhythm guitarist Toki Wartooth, and the antsy alcoholic drummer Pickles.

The characters develop a bit in the fourth season: Nathan unwisely dates a fan; Toki begins to assert himself a bit more, although in predictably juvenile ways; Murderface's lack of self-esteem reaches new depths; and the band as a whole faces a breaking point. As always, the show enjoys a special narrative momentum, which is often propelled by sequences featuring Dethklok songs or the propulsive score; all of the show's music is composed by co-creator Brendon Small. Carefully written, directed, and edited, each of Metalocalypse's ten Season Four episodes plays like a grotesquely hilarious short film.

Image and Sound
The technical aspects of this Blu-ray are excellent. The 1.78:1 image is crisp, deep, and rock solid. The tendency toward brownish and reddish earth tones means that splashes of brighter colors really leap off the screen. Detail levels are excellent. Although the show's design is gorgeous, the animation itself is limited in its technique, and ironically the outstanding transfer highlights the animation's shortcomings. But it's a minor point. The Dolby TrueHD surround track is quite an experience. As you might expect, the show should be watched loud.

Bonus Content
There are 127 minutes of extra features, but the first 80 of those minutes comprise another "Nathan Reads Shakespeare" featurette, which is funny enough although I have no clue who would be willing to sit through all 80 minutes of it; perhaps only those who partake of certain controlled substances could sustain the proper endurance. The remaining 47 minutes are spread across a selection of shorter - and mostly weird and disposable - featurettes and deleted scenes.

Metalocalypse re-confirms its place as one of television's smartest and funniest shows with their return to form in Season Four. The shorter format suits the show well, and these ten-minute episodes exemplify the high standards of writing, music, and plotting that were set early in the series' history. An excellent technical presentation and re-watchability make this an essential purchase for fans of the show. Highly recommended.