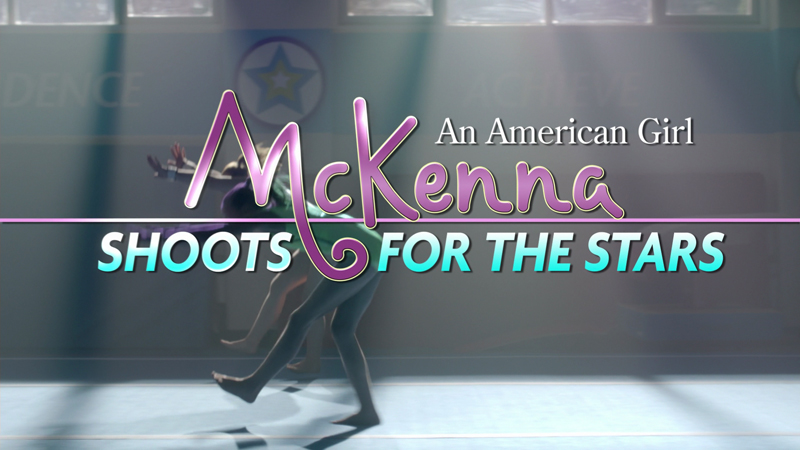 
The Movie
I find the entire American Girl doll industry to be a pretty disturbing world, built around indoctrinating young girls into a high-end consumer mind-set, enforced by their stores, which feature doll make-overs and tea parties. Of course, my daughter has a few American Girl dolls, but they were gift from two of her grandparents, who schlepped into New York City with her to experience the spectacle in person. If it was entirely up to me, she'd never own a single American Girl doll, in the same way that I've kept her from having a Bratz doll, or any of the other toys I find distasteful.

As much as I dislike the dolls, I don't have as big a problem with the books and movies, because they mostly stand on their own and don't demand a lot of other purchases (though they are basically product placement for the dolls.) Plus, reading is rarely a bad thing. The movies on the other hand, well, they're not the greatest films man's ever seen. Sadly, there's not a lot of media aimed at pre-teen girls that is very good, and that's not because it fails to entertain a man in his 30s. My most objective measures, shows and movies aimed at pre-teen girls tend to be overly simplistic and poorly constructed. There's a reason why My Little Pony: Friendship is Magic has been so widely embraced. It's simply well-made, no matter who they meant to entertain.

McKenna Shoots for the Stars is definitely not made in the Pixar mindset, where its understood that there's probably going to be an adult in the room, and they would like to be entertained as well (or at least not be driven into misery.) This is pure and simple, a kids movie. Lots of little girls, the things little girls enjoy (like giggling, horses and gymnastics), and the problems they face, which tend to be either embarrassment or the fickle emotions and mindsets of their fellow pre-teen females. Seriously, I fear for my daughter, because it seems that the ability to rapidly change moods without cause is an innate curse in the female of the species, not just a special power unleashed by puberty. At least that's the case with McKenna (Jade Pettyjohn), a young gymnast who goes from smiling child to morose elf to bitter munchkin with the changing of the wind. Injured just before a big competition, she's forced by her well-intentioned parents (Nia Vardalos and Ian Ziering) to focus on the school work she'd been struggling with, by getting help from a tutor, the wheelchair-bound Josie (Kerris Dorsey.) 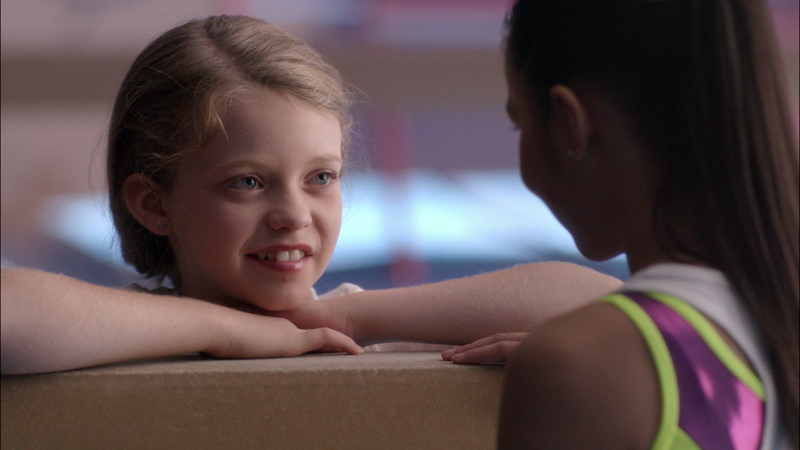 Everything that happens from there on out seems to be caused by either trying to satisfy those around the girls, or trying to cope with their sudden bad attitudes. The character of McKenna's on-again, off-again best friend Toulane (Ysa Penarejo) should likely be under a doctor's care with the way she changes personalities, while the new girl at school, Sierra, is a victim of bullying simply for trying to be nice. Meanwhile Josie gets a heaping helping of suffering of her own for being friendly and helpful, despite being in a wheelchair. I've seen how awful teen girls can be, but somehow it cuts a bit deeper when the attacker still qualifies for kid's pricing at Old Country Buffet. (That these pint-size schizos also seem able to get themselves all over town without the involvement of a parent makes them seem that much more dangerous. They could be anywhere...)

This being an American Girl movie, sunshine and lollipops are never far away, so even at its darkest point, a laugh-inducing pillow fight is always right around the corner, probably after yet another musical montage. The level of cheesy wholesomeness on display, especially from the nearly manic Vardalos and Ziering, gets tiring very quickly. Vardalos has never been considered subtle in her acting, but her happy faces are on another level this time out, and Ziering's main direction must have been "Smile or we'll shoot your dog." If their artificial serenity wasn't over-the-top enough, the amber-lit sunlight-kissed scenes of love and understanding are just too sappy as well.

Sure, I've pounded on this film, but it deserves it from the perspective of a grown man. But at least I can praise first-time director Vince Marcello and his crew for making it all look rather nice, especially in the film's later gymnastics montages, which were actually pretty entertaining to watch. Utilizing lots of trick editing and some neat effects, Marcello and company raised the bar as far as how visually interesting a pre-teen girls' movie can be. Did my daughter care about the split-screens though? No. Did she appreciate the message that you have to believe in yourself and not let others define you? No. She was more engrossed in the fun and drama of McKenna's life, all the pretty costumes and imitating the gymastics and dance moves. So from her point of view, this was a runaway success. 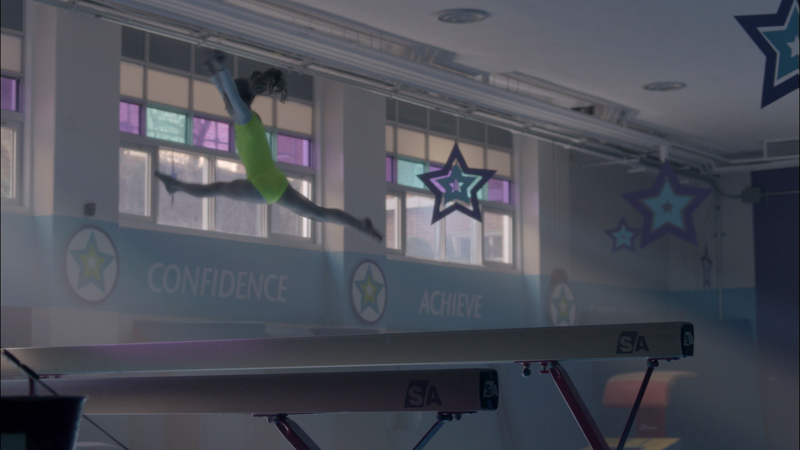 The Disc
The film arrives on a single Blu-Ray disc and a DVD copy, which are in a standard Blu-Ray keepcase with an embossed slipcover. The disc has an animated menu, with options to watch the film, select scenes, adjust the set-up and check out the extras. Audio options include English DTS-HD Master Audio 5.1 and Spanish DTS Surround 5.1 tracks, while subtitles are available in English SDH, Spanish and French.

The Quality
The 1080p VC-1-encoded transfer looks good, tackling lots of different color palettes, delivering them all effectively, while offering up plenty of fine detail, though some hazy scenes have a touch of softness to them. The effects work, which is surprisingly plentiful, fits in nicely, unlike on so many Blu-Rays. There are no obvious issues with digital distractions, but there's some odd halos in one or two scenes.

The DTS-HD Master Audio 5.1 soundtrack is a bit basic, keeping the voices clean and crisp in the center channel, while pushing the many songs to the side and rear speakers, where they get a strong delivery. Though you won't find much in terms of dynamic mixing, there's some quality atmospheric sound that sets the scene in places.

The Extras
Nothing to see here, folks, outside of an Ultraviolet digital copy of the film. Keep moving. 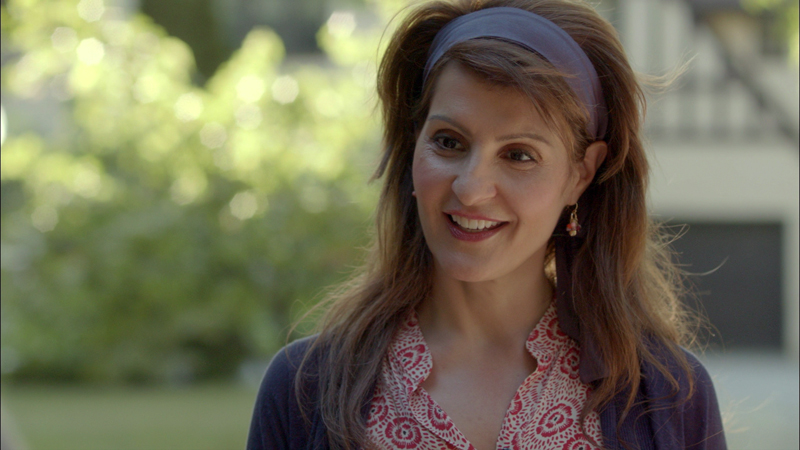 The Bottom Line
I didn't expect to like McKenna, and, in the end, I didn't, thanks to an overall cheesy tone and the annoying kid characters, but thanks to the solid construction of the film, I didn't hate the experience, and that's saying something. For my six-year-old, however, mixing her favorite doll brand with gymnastics was a concoction made just for her, even if she didn't quite absorb the messages. The Blu-Ray looks and sounds fine, but offers not a single extra, so unless your little one is obsessed with American Girl and gymnastics (a real possibility with the Olympics here), you're better off with a rental on this one.