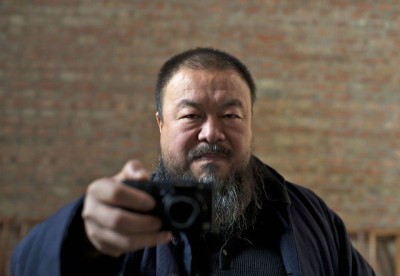 There's a good chance that much of the audience for Ai Weiwei: Never Sorry will know a great deal more about artist/activist Ai Weiwei than this viewer did, and they will certainly find much to latch onto. But there is always something of a question about whether a lack of familiarity with a documentary's subject is a hindrance, and in this case, the answer couldn't be clearer: moviegoers unaware of Weiwei will find this up-close portrait of his life and work fascinating, ballsy, and more than a little scary. A big bear of a man with a cool demeanor and a pronounced distaste for authority, he's a movie star in waiting; I'm amazed it took someone this long to make if official.

Director Alison Klayman logged considerable time with the artist over the past several years, interviewing him from his home in China and abroad, following him around his studio in Beijing, where he points out the government operatives observing him and the surveillance cameras they installed to keep an eye on him. Son of a dissident poet, Al Weiwei spent much of the 1980s in New York, tying to capture attention as part of that city's vibrant art scene, and when he returned to China to care for his dying father, he couldn't reconcile the two ways of life: "Freedom is a strange thing," he says "Once you've experienced it in your heart, you can never take it away."

Back in China, he began making art that expressed his frustration with the stifling of human rights and free expression in his home country, and over the past several years, that frustration bled into full-on advocacy, as he spoke out against the Beijing Olympics (in spite of his involvement in the design of the event's stadium), conducted his own investigation of the casualties of the Sichuan earthquake (numbers and names suppressed by the Chinese government), and spoke out against China on the Internet, first via his blog (which was promptly shut down), then on Twitter.

Not all of what we see is from Klayman; much is culled from the many documentaries he makes (and gives away) of his own exploits, crafted from endless footage shot by videographers he keeps in his employ. In one fascinating scene, an informal gathering of Weiwei and his supporters is captured on video by Chinese police, and we realize with a chill that the documentary crew's are not the only cameras at the event--before Klayman's camera pans over to reveal Weiwei's photographer videotaping the police cameraman. Three separate crews record the happening, and record each other, a refracting of image capture akin to mirrors facing each other, to infinity.

Klayman's footage (and Weiwei's, for that matter) adopts an intimate, vérité-style approach that seems appropriate to the subject at hand; he's a righteous man but an informal one, and several scenes amount to hanging out and talking theory and ideals. But he's not just talk, and Klayman craftily interweaves the stories of other critical Chinese intellectuals who keep ending up in jail to build suspense in a genuinely interesting way. Weiwei is a bold, angry, seemingly fearless guy, but that kind of thing has its limits, and there is a shocking moment near the end where we get a glimpse of how that man sounds when he's muzzled. It's not pretty. He wears the suit of the angry advocate much more comfortably, and luckily, there's plenty of that on display elsewhere in this smart, boisterous, and provocative picture.