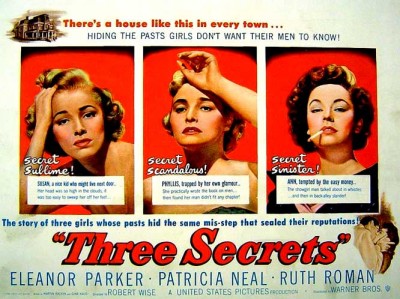 Three Secrets begins on little Johnny's fifth birthday. He is flying back from vacation in his family's small propeller plane to have a celebration at home when bad weather causes them to crash atop a remote mountain peak. Mom and dad are killed, but the boy is left alive. Rescue is going to be difficult, but the kid's story becomes the talk of Los Angeles, especially after it's revealed that he was adopted and he will be returning to sea level to find all he had in the world is gone. Three different women from three different walks of life do the math and realize that the child might be theirs. They each gave up a boy on September 15, 1945, and that might be their son in jeopardy up there on the rocks.

And so we learn each woman's story in turn, as they gather at the base camp where reporters and gawkers await the return of the daring climbers risking life and limb to bring Johnny home. There is Susan (Eleanor Parker, The Man with a Golden Arm), whose innocence was taken by a soldier on leave, and who is now happily married to a decent man; Phyllis (Patricia Neal, Breakfast at Tiffany's, Hud), the reporter who, on a break from her work in the battle theaters overseas, conceived during a last-ditch attempt to save her marriage (it didn't work); and finally there is Ann (Ruth Roman, Strangers on a Train), an actress and dancer who killed her rich lover when he accused her of lying about her pregnancy. All three have a reason to want Johnny to be theirs, and all find common ground with their untold stories, waiting out the rescue expedition while Phyllis' newspaper searches for the truth.

Though borrowing heavily from the story structure of the very successful A Letter to Three Wives, which was released one year prior, Three Secrets stands on its own as a quality melodrama from the period. Directed by Robert Wise (The Set-Up, West Side Story) from a script by Martin Rackin (The Enforcer with Bogart) and Gina Kaus (The Robe), Three Secrets draws a tight narrative line. The script speaks of each woman's plight with a surprising frankness, tap dancing around ever mentioning premarital sex with a sly agility. Though each miniature story could have been played for big drama, the filmmakers stay smart and let the inherent tensions and tragedies find their way to the fore. The Patricia Neal story in particular makes for a refreshingly honest portrayal of a career woman in a sudsy "ladies picture." While the housewife's story offers redemption and the dancer's has the air of lurid scandal, the reporter's story works the middle. The other ladies are done to, but she does for herself, making the choice that she thinks is best.

It also doesn't hurt that Patricia Neal is such a great actress. It's hard to imagine any other performer of the early 1950s playing the role with such confidence. It wouldn't be the last time she made a convincing case as a sole lady amongst a legion of men, and it's a pleasure watching her verbally cut down the other reporters. Some of how Wise sets up the feeding frenzy that encircles the tragedy prefigures Billy Wilder's more cynical Ace in the Hole, which was due to flop into theaters a year later. A big plot point hinges on what is right to report and what is not. When does the pursuit of story overtake one's sense of compassion?

Though one might think he or she can easily predict how Three Secrets will turn out, Wise never overplays his hand so that any single outcome feels like a forgone conclusion. Thus, the surprises that finally do arrive really do feel like surprises, making for a finale that delivers on audience expectations without pandering to them. 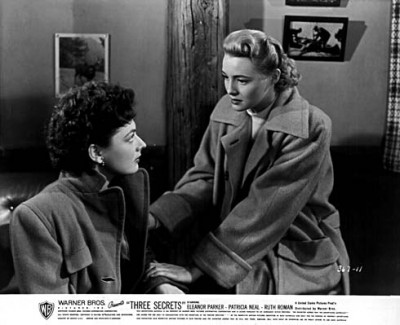 Video:
The high-definition, full frame (1.37:1) presentation of Three Secrets has a decent black-and-white picture. Though there are regular appearances of marks and scratches, the overall quality of the source print is rather strong, with no jump cuts and fairly sharp resolution.

Sound:
The original soundtrack is mixed in mono and sounds good. Not much can be done to spruce up a basic audio track such as this, so the mixers do the smart thing and make sure that any extraneous noise has been removed and all the dialogue can be heard clearly.

FINAL THOUGHTS:
Though it would be easy to brand Three Secrets as a knock-off, it transcends any studio cash-in on storytelling trends by being a damn solid movie, the kind of B-picture that a craftsman like Robert Wise could effectively upgrade to an A+. Anchored by a superb performance from Patiricia Neal, this tale of a trio of women wondering whether the boy stranded atop a mountain is the one they gave up for adoption makes for some pleasing melodrama. Three Secrets is both smart and heartfelt, a rare combination in a genre that could play it safe and lean heavily on emotional buttons. Highly Recommended. 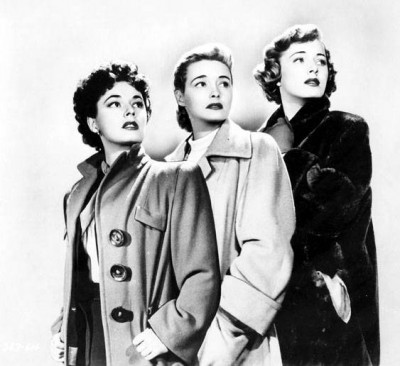