While not quite a great series, Peter Gunn (1958-61) in one sense bridges two different ages of entertainment. For starters this super-hip private eye show was one of the signifiers of the end of film noir. Orson Welles's Touch of Evil, widely regarded as the last true noir of the classical period, opened in May 1958 while Peter Gunn premiered that September. Although a TV version of Mickey Spillane's Mike Hammer, starring Darren McGavin, preceded Peter Gunn by half a year and debatably offered better hardboiled scripts, stylistically that show was more conventional. Peter Gunn, conversely, oozes with noirish atmosphere, with stories that always seems to take place in the middle of the night, on rain-soaked streets and in smoke-filled jazz clubs, all to Henry Mancini's jazzy, pulsating scoring. (Indeed, the iconic main title theme plays against an abstract background resembling pulsating arteries.)

In this way Peter Gunn not only marked the end of the classical film noir period, in other ways it predicts a predominance of style over substance, of latter-day shows like Miami Vice where the look and music take precedence over story. While its teleplays frequently offer crackling dialogue and are certainly no worse than other half-hour detective series, it's not Peter Gunn scripts that the audience who grew up with the program remember. No, it's the look, and the music, especially that theme.

A&E Home Video released two DVD volumes of 16 episodes apiece some ten years ago, but consumers complained about the video transfers and asserted at least some episodes were cut. (I never sampled those.) Full season sets were released in the United Kingdom in 2007, but reportedly those transfers were problematic as well.

Now comes Peter Gunn - The Complete Series, a 12-disc, three-season set of 114 twenty-five-minute episodes, or roughly 47 hours worth in all. Not surprisingly, I didn't get a chance to watch every episode, but in sampling shows from all three seasons overall the video transfers look reasonably good. The transfers are fairly sharp and clean, though cramming an average of ten episodes per disc inevitably raises compression issues. There are a few weird anomalies like the end titles, in which each title card resembles a badly free-framed screen grab. But for the price (through Amazon, about 76 cents per episode as I write this) one gets their money's worth. A soundtrack CD of Mancini's music, with 12 tracks, is tossed in as a welcome extra feature. 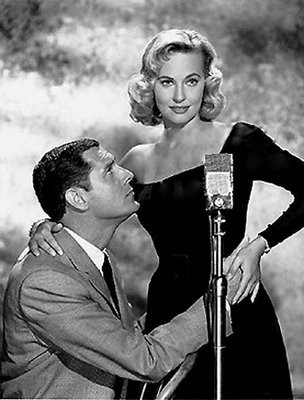 Craig Stevens plays the title character, very '50s in appearance but also wryly humorous and low-key. Just as nearly the entire series takes place at night, the audience rarely gets to see private investigator Gunn's office, the gumshoe preferring to work out of "Mother's," a jazz club in the unnamed waterfront district (but vaguely San Francisco), where his girlfriend, vocalist Edie Hart (Lola Albright) works. Mother herself is the club's hatchet-faced proprietor, an urban Ma Kettle, a veteran of the Prohibition days.

In the first season she was played by the great Hope Emerson (Westward the Women, Caged) and won an Emmy as Best Supporting Actress, but for reasons not entirely clear left Peter Gunn for The Dennis O'Keefe Show the following season, and died soon after shooting its final episode, which aired after her death. Minerva Urecal, a lower-rent Marjorie Main type (she once played Bela Lugosi's sister, in the wild The Ape Man), replaced her. In lesser, usually non-speaking roles were associate producer Byron Kane as Mother's bartender, while Bill Chadney, who married Albright in 1961, was its jazz pianist.

Also in the cast is Herschel Bernardi, a victim of the Hollywood Blacklist and known to later generations as the voice of Charlie the Tuna (in a long-running series of TV commercials), and who appeared on an episode of Mike Hammer shortly before joining the cast of Peter Gunn. He plays police Lt. Jacoby, who at times seems to be the only cop in town.

The series was shot mainly on Hollywood backlots, at Universal for its first season, and then at MGM for years two and three. It uses these overworked streets extremely well and the series, filmed in 35mm by Philip Lathrop (another Touch of Evil veteran) and others, positively drips with the slick look of a theatrical noir, with even some flashy camerawork here and there. (A second season show, "Protection," includes a neat scene shot from the ceiling of a morgue, looking straight down at Gunn and Lt. Jacoby as their voices echo noisily.)

Beyond its music and its look, Peter Gunn has consistently entertaining if lightweight scripts, a jumble of noir movie and dime store novel plots. The dialogue is almost always sharp and, particularly good, are scenes featuring Gunn and Edie trying to find time to make out. The combination of the admirably adult dialogue and Albright's sexy performance is very engaging. And the show makes no bones about it: she and Gunn enjoy a healthy sex life, rare for '50s TV couples.

The success of Peter Gunn pretty much made creator (and occasional director) Blake Edwards and frequent collaborator Henry Mancini, who soon moved on to bigger and better things. Mancini had spent most of the fifties scoring without credit music for Universal-International productions. (For instance, he wrote much of the scores for Creature from the Black Lagoon and It Came from Outer Space.) Significantly, one of his last U-I assignments was Touch of Evil. Peter Gunn's soundtrack album reached #1 on Billboard's pop chart, and its title theme has since been covered by everyone from Duane Eddy to Jimi Hendrix.

As noted above, the region 1 encoded Peter Gunn generally looks good considering that an average of 10 episodes, or more than four hours, have been crammed onto each of the 12 single-sided, dual-layered discs. The image, standard size 4:3 and not reformatted to 16:9 widescreen (as some have speculated) is relatively clean of dirt and wear, and sources video transfers that don't appear to be too ancient. I didn't see all 114 episodes, but those I did appear to be uncut and unaltered. The English-only, unsubtitled audio, Dolby Digital mono, is reasonably strong as well.

The lone extra is a pretty good one, a soundtrack CD of Henry Mancini's music, with 12 fun tracks that play especially well while driving around town in the middle of the night.