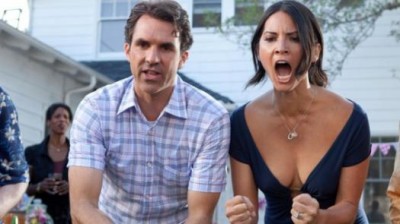 Jay Chandrasekhar's The Babymakers is a happily low-rent, cheerfully dirty sex comedy, raw and ribald but nowhere near as mean-spirited as what tends to pass for sex comedy these days. Director Chandrasekhar hails from the Broken Lizard troupe, and a few members of that group (including him) pop up, but it's not a "Broken Lizard movie,"; it's a fairly conventional love-and-marriage comedy, with some sperm theft thrown in.

Paul Scharder and Olivia Munn play Tommy and Audrey, three years married and ready to start a family. After months of trying, however, they find out that Tommy's sperm isn't quite up to the task. "They look drunk!" remarks Audrey, when shown a slide of his sluggish swimmers. Tommy can't believe it--especially since, just a few years earlier, he made several high-paying deposits to a sperm bank (to finance Audrey's engagement ring). A visit to said bank reveals only one of those deposits remaining, and it's already spoken for. But when the strain of misconception starts to hit the marriage, Tommy comes up with a plan: break into the sperm bank and swipe his stuff.

The robbery angle dominates The Babymakers' loglines and trailers, but the picture takes its time getting there; that stuff's not introduced until nearly halfway through. Until then, the film is mostly occupied with the nuts and bolts of trying to knock up Audrey, with the "work" of conception and the trials of family planning, and those scenes are arguably more engaging, if equally silly. When they work, it's primarily because of Schrader and Munn, who have a nice, easy chemistry. She's got a zingy way with her dialogue, and is a good sport throughout, while Schrader (good but underused in the early seasons of Parks and Recreation) is slyly doing some real acting and character work amidst the parade of whack-off jokes.

The pictures runs out of steam in the second half, though, mostly due to a misfiring subplot concerning a stack of pictures revealing Tommy's ex (and the current girlfriend of one of his buddies) in her altogether; the story strain never warrants any real laughs, and mostly serves to create predictable conflict, plot mechanics at their worst. The climactic robbery sequence has that old reliable source of comedy, dumb criminals, to fall back on, but the slapstick (particularly of the, erm, liquid sort) feels more than a little desperate. And its closing image is awfully grim.

But considering how many unamusing comedies we've seen recently, it's hard to overvalue an honest laugh, and The Babymakers has a few of them: Tommy and Audrey's discussion of "the anal anniversary," the payoff to the lie Tommy uses to get his money back from a shifty criminal type (nicely played by the director), and a crotch-injury montage placed in the one film where it's actually organic (when trying to ascertain the cause of his "confused" sperm, Tommy is asked if he's sustained any "testicular trauma"). Look, this isn't a great comedy, by any stretch. But if you've had a couple late some evening, it'll do the trick.