But 1953 was also the year Fox introduced the CinemaScope process, and it completely transformed the content as well as the look and sound of the company's (and other companies') features. After their first CinemaScope release, The Robe, earned $36 million on a $4 million investment, for the next several years Hollywood's A-budget movies were dominated by like-minded epic historical dramas. Fox themselves had King of the Khyber Rifles waiting in the wings to immediately follow The Robe before the year was out, and 1954 saw them release The Adventures of Hajji Baba, Demetrius and the Gladiators, The Egyptian, Prince Valiant, and Désirée.

These CinemaScope epics are not held in the same high regard as Fox's early '50s films and in many respects they've become more dated than those earlier, standard screen-size, mostly black-and-white productions. Désirée, a historical drama following the rise and fall of Napoleon (Marlon Brando) as seen through the eyes of Désirée Clary (Jean Simmons), his one-time fiancée, is a typical example.

In short, it's gorgeous to look at but without much substance. And yet, on Blu-ray especially such films still have much to offer. Like all of the early CinemaScope epics from '53-'55, Désirée has in its favor an excellent all-star cast, a superb musical score coupled with impressively directional audio, originally in 4.0 magnetic stereo. Director Henry Koster and cinematographer Milton R. Krasner come up with superb widescreen compositions that make full and imaginative use of the new widescreen format, and the film's sets, costumes and overall production values are impressively lavish. 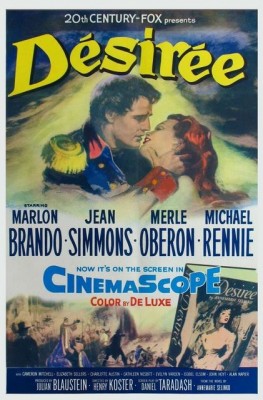 Eventually they become engaged as well though he soon leaves for Paris and does not return. She follows him there only to discover, for the good of France, supposedly, Napoleon has instead become engaged to the wealthy Joséphine de Beauharnais (Merle Oberon). Désirée contemplates suicide but gentle, soft-spoken General Jean-Baptiste Bernadotte (Michael Rennie) stops her, and soon he's in love with her.

As Napoleon's power grows and he and Joséphine become Emperor and Empress of the French, Désirée in turn marries Bernadotte. But Désirée and Napoleon's often prickly, tempestuous relationship mirrors the love-hate relationship between the people of France and their all-powerful ruler.

Désirée looks and sounds great, but as drama it's as flat as a collapsed soufflé. The film was advertised as a lush, romance-filled successor to Gone with the Wind, and like that film's depiction of the Civil War and Reconstruction as seen through the eyes of a Southern belle, the focus here is on Désirée, not Napoleon. There are no battle scenes and almost zero action of any kind. It's a talky, largely static film made worse via Désirée's narrated diary entries, a clumsy device used to clarify exposition and history happening off-screen.

The flatness of Désirée is all the more apparent when one considers the exquisite films Jean Simmons had done for directors like David Lean and Michael Powell/Emeric Pressburger just a few years before. Even her role in The Robe was profoundly more interesting. The part of Désirée was allegedly slated for Audrey Hepburn, and she at that age might have made believable and charming Désirée's extreme naïveté and utter lack of guile. Simmons, naturally projecting more worldliness (consider her young Estella in Great Expectations) comes off almost like a halfwit here. When Bernadotte is offered the position of heir to the throne of Sweden, Désirée protests, "But I'd have to learn Swedish!" And, en route, "I put on my woolen underdrawers and I'm still freezing!"

It's been said Brando didn't take his role seriously, and that he only accepted the part in order to avoid a $2 million lawsuit by Fox after walking away from the leading role in The Egyptian during rehearsals. Regardless, his Napoleon is a superficial, unengaged performance, which Brando himself later considered "the most shaming...of my life." He affects a Mid-Atlantic accent perhaps intended to project an air of culture but which only adds unreality to the performance. Ironically, the more traditional Michael Rennie comes off far more naturalistic and believable - he's even touching - than Brando's artificial Napoleon.

But Désirée has its attributes. Koster and Krasner use the super-wide, 2.55:1 early CinemaScope aspect ratio superbly, with compositions that imaginatively use depth as well as width to good effect. Often one-third of the image will be a medium or medium close-up in the foreground, interacting with background action in the other two-thirds of the frame. One impressive shot finds an orchestra performing on the mezzanine level of a huge ballroom as the extravagantly costumed extras waltz below. In other scenes Koster and Krasner favor a more traditional tableaux approach, such as in the interesting self-coronation scene where Napoleon is declared Emperor of the French.

The film is lavishly appointed, with beautiful sets and even some second-unit footage shot in France, further supported by several elaborate matte shots. The score by Alex North (available as an isolated track) is likewise excellent.

Released in 2.55:1 CinemaScope, Désirée generally looks quite good. Color tends to be on the brownish side, and dissolves and other opticals are notably softer, but overall the image is far more detailed and truer than I was expecting. It's not quite up to the level of Fox's Blu-ray of The Robe but it's in that general ballpark, and significantly better than weaker color/'scope titles on Blu-ray like Forbidden Planet and Journey to the Center of the Earth. The 4.0 DTS-HD MA really brings out Alex North's score while there is much directionality to the dialogue and sound effects. No alternate language options, and no subtitle options, regrettably.

Supplements are limited to an isolated score track and a trailer that appears bumped up from standard-def. Helpful liner notes are provided by Julie Kirgo in a small, full-color booklet accompanying the disc.

Ironically, the $2.7 million Désirée, with rentals of $4.5 million, was commercially a far bigger success in its day than Marlon Brando's other movie that year, On the Waterfront. But Désirée has many interesting components, and Twilight Time's Blu-ray is the first home video release in which these attributes can truly be appreciated. Highly Recommended.