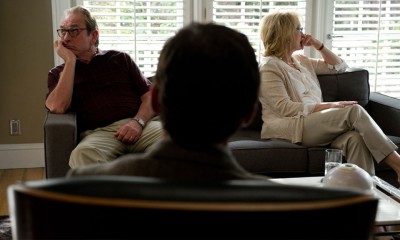 The last time Meryl Streep starred in a middle-aged sex comedy, the result was It's Complicated, so you can forgive me for walking in to Hope Springs with something less than fevered anticipation. And let's not oversell--this is a film with real problems, from its tenuous grasp of tone to the many, many questionable music choices. But it's not a bad film. It's sweet and occasionally very funny, with an achingly credible leading turn by Meryl Streep and a Tommy Lee Jones performance which nicely reconfirms that, at this point in his career, Tommy Lee Jones is pretty much great in anything.

They play Kay and Arnold, who have just celebrated their 31st wedding anniversary, and marked the occasion by upgrading their cable package. There is not a lot of romance left in the marriage. Every day pretty much follows the same routine as the next: the same eggs and bacon breakfast, the same out-the-door conversation, the same small talk at dinner, the same snooze in front of the television before they head off to their separate bedrooms. Kay finally decides she's had enough, that she wants some romance, some life, some something in their relationship, and that's when she discovers the work of Dr. Feld (Steve Carell). Feld is an author and marriage therapist who offers a one-week intensive couples counseling course in Maine, and Kay decides they're going. Arnold does not like the idea, and is all but pulled into Dr. Feld's office by his fingernails.

The film plays best when it's just the three of them, in that room; director David Frankel (The Devil Wears Prada) turns off the music and lightens up on the easy laughs, points the camera at these three actors, and lets them work. He's got a few too many tight close-ups in those scenes--they play best in two and three-shots, where we can see not only who's speaking but how the other is reacting, which is often just as interesting. We are, after all, talking about two of our best film actors, and Jones's gruff delivery and pained smiles can get a laugh out of even the weakest lines and beats. Streep is well-matched, playing the frustrated wife without sounding any of the obvious notes, and while they seem a very odd couple, they're very good at peeling away the distance and revealing the sweetness underneath. When they connect, there's a joy to it, and they're both so ultimately likable that you want them to get it together, which is half the battle in romantic comedy (no matter what the age of the protagonists).

As they get closer, you realize how seldom we actually see or hear about sex onscreen when it's not between young/beautiful people. But Frankel seems to have a hard time deciding whether he takes them seriously; the picture veers uneasily from snickering at their escapades to sad scenes of them walking through the picturesque locations as obvious pop songs or Theodore Shaprio's insufferable score are heard. It's not like how Cameron Crowe sometimes lets his soundtrack do the work for him; this isn't even a particularly good soundtrack.

And as sincere as he is as the third wheel, Carell is miscast as the good doctor; this is a role that neither gives him the chance to be funny nor interestingly serious, and it's ultimately hard to determine why Carell thought the role was worth his time. And the picture really wastes Elisabeth Shue and Jean Smart, in one and two-scene roles (respectively) that give them no opportunity to do much of anything. But for all of those flaws, Frankel has certainly cooked up something more appealing than those atrocities Nancy Myers unleashes every few years, and in its best moments, Hope Springs has laughs and charm, and it gets to the heart of marital complacency with some real insight and surprising sensitivity.