Miramax // PG // October 16, 2012
List Price: $14.99 [Buy now and save at Amazon]
Review by Adam Tyner | posted October 21, 2012 | E-mail the Author
Once upon a time in a land far, far away, there was a newborn baby girl named Ella. Usually in these sorts of stories, the fairy godmother doesn't show up for a few chapters, but Lucinda (Vivica A. Fox)...? Ooooohhhh, she's too excited to wait. She has the perfect fairy-dust-sprinkled gift for lil' baby Ella too: obedience! Anytime anyone tells Ella to do something -- no matter how impossible! -- she's magically obligated to comply. Okay, okay, maybe that's more of a curse than a gift, but Lucinda means well, and she doesn't do refunds or exchanges anyway. As Ella blossoms into a kind, courageous young woman who looks strikingly like Anne Hathaway, she does her best to deal with her curse of obedience, even if that means taking things like "bite me" or "hold your tongue" a little too literally.

The thing is that Ella Enchanted isn't one of those fairy tales where everyone lives happily ever after. Sorry, Ella's Mom. Enter the wicked stepmother (Joanna Lumley) and equally wicked stepsisters (Lucy Punch and Jennifer Higham). They clue into Ella's closely guarded magical secret and quickly exploit it, compelling her to do the most awful, heartbreaking, and occasionally not-altogether-legal things. A life without free will ain't much of a life at all, so Ella embarks on a quest to track down Lucinda and beg her to flip the switch off on that curse. Along the way, she discovers that subjugation is kinda part and parcel of living in this particular kingdom. Once-proud giants are used for slave labor. Ogres have had everything stripped away from 'em, forcing them to pillage, plunder, and occasionally devour any human unfortunate enough to cross their path. It's decreed that elves can only sing and dance. If you're an elf like Slannen (Aidan McArdle) who wants to shrug off showbiz and study law at Frell U instead, then...well, a musical production of "Here Comes the Judge" is about as close as you're gonna get to a courtroom. Geez, what happened to this place anyway? I guess Prince Charming...errr, I mean, Prince Charmont (Hugh Dancy) can right all these wrongs once he's coronated a few days from now, but his sinister uncle Sir Edgar (The Princess Bride's Cary Elwes) isn't ready to ease his chokehold on the throne quite yet...!

I was completely charmed by Ella Enchanted when the DVD showed up in my mailbox eight long years ago. Giving Ella Enchanted another look now, some of the magic has faded, but it's still a cute, clever, post-modern spin on the traditional fairy tale. Hands down the best thing about the movie is Ella. Anne Hathaway wouldn't be a household name until a couple of years after this, but it's apparent even in this early stage in her career how much of a star she'd turn out to be. Hathaway is just...luminescent. Entrancing. It's kinda mandatory for a fairy tale princess-type to be beautiful, good-hearted, and brave, but Ella captures all that without settling into a squeaky-voiced cliché. She radiates a strength, intelligence, and confidence that don't often come through in these sorts of stories. As someone who's a little tired of the "be proud of who you are!" moral message behind 87% of family movies, ever, it's a welcomed change of pace that Ella Enchanted has something different to say. The message here is more about independent thinking than letting your freak flag fly, and Ella Enchanted is kinda socially conscious while it's at it.

'Course, I don't want to make Ella Enchanted sound super-preachy or anything; it's a heckuva lot of fun. The soundtrack is infectiously anachronistic, most memorably Hathaway's show-stopping rendition of Queen's "Somebody to Love", and with updates of "Strange Magic", "Don't Go Breakin' My Heart", "Joy to the World" (think Three Dog Night, not a Christmas carol), "Respect", "You Make Me Feel Like Dancing", and a synth-heavy pop-punk spin on "Walking on Sunshine" along for the ride too. The underfunded visual effects can look pretty dodgy, yeah, but the cinematography is frequently breathtakingly gorgeous...as close to a storybook-come-to-life as I've ever seen splashed across my TV. Don't be thrown off by the peeing baby gag early on; Ella Enchanted sports an impressively sharp sense of humor, and there are scores of background gags you'll still be discovering the third or fourth time through. With jabs at Botox and a fairy getting busted for FWI (y'know, "flying while intoxicated"), the comedy doesn't strictly pander to the junior set either. The particulars of Ella's curse open the door for a lot of really inspired jokes, and I love how gloriously random so much of the movie is...everything from an outta-left-field chorus line of elves to a wire-fu ninja battle. Heck, I'm not even going to write some sort of sum-it-all-up paragraph; if this post-modern fairy tale doesn't have you at "wire-fu ninja battle", there's no hope. Recommended.

Ella Enchanted looks like it's been minted from a stale, musty master from the Miramax vaults. The texture doesn't read as film grain so much as video noise, and the AVC encode kind of chokes on it. The whole thing looks uncomfortably digital rather than a warm, filmic fairy tale. Case in point...!


The image is surprisingly flat too, and this high-def presentation fails to deliver anywhere near as much in the way of clarity and fine detail as I'd have liked. There's also some infrequent banding, and...well, brace yourself for another example:


So, yeah, Ella Enchanted is a notch or two below mediocre on Blu-ray, but it still looks a whole lot better than that DVD from all the way back in 2004. The edge enhancement on the old Miramax release is nowhere to be found here, shadow detail is a lot less muddy, and it's quite a bit crisper and clearer overall. The Blu-ray disc strips away a bit of the matting, revealing an aspect ratio of 1.78:1, although there's actually additional information on all four sides rather than just the top and bottom. The brightened image here does futz with contrast and black levels, though. I've gone entire sentences without whipping out a screenshot comparison, so I guess it's time again for one of those:


As much as I've grumbled and groused in this stretch of the review, it really is worth noting how much of an improvement even a disc this flawed is over the original DVD release, and I'm still kind of smitten with its bright, candy-colored palette. The bargain bin pricing eases the sting too, although I still think Ella Enchanted deserves better.

Ella Enchanted is dished out on a single layer Blu-ray disc, and the second disc in the set is the same old anamorphic widescreen DVD you already know and love.


Audio I won't drone on nearly as long about Ella Enchanted's lossless audio: pinky swear! It doesn't hurt that I don't have all that much to say about the 24-bit DTS-HD Master Audio track either. Pretty much everything's anchored up front, with the 5.1 audio reserving the surround channels largely for music and atmosphere. There are a few magical "poof!"s and a couple encircling voices coming from behind, but you're not missing out on a whole lot if you have a straightahead stereo rig. The LFE is modest enough that even the subwoofer doesn't have a whole lot to do. Dialogue comes through well enough, balanced cleanly and clearly in the mix. From the sound design to the overall fidelity, there's just nothing particularly dazzling about Ella Enchanted's audio. Fine but forgettable.

No dubs or alternate mixes this time around. Subtitles are served up in English (traditional and SDH) and Spanish.


Extras Pretty much everything from the special edition DVD has been carried over, minus the DVD-ROM stuff and an interactive game. Nothing new, tho'.

The DVD in this combo set is a bit-for-bit exact copy of the one Miramax put out eight years ago, complete with sneak peeks at upcoming movies like 2004's The Princess Diaries 2! Aside from some of the logos and stuff screened on the cover art, there's no difference whatsoever.


The Final Word Sweet, clever, and a heckuva lot more action-packed than you'd probably expect from a family-friendly post-modern fairy tale, Ella Enchanted is about the closest thing we've gotten to The Princess Bride over the past ten years. In a word, it's...well, enchanting. I know. Sorry. The technical end of this Blu-ray release is kind of a let down, but it's still a hefty step over the creaky, old DVD, and the bargain basement sticker price makes swallowing that pill at least a little less bitter. With a slicker presentation, I'd probably have given Ella Enchanted a more enthused rating, but this...? Still Recommended. 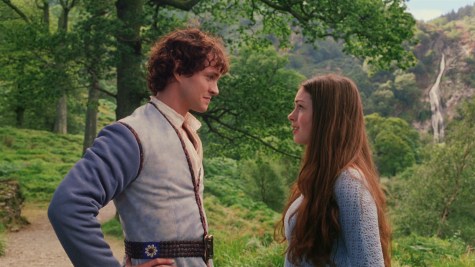 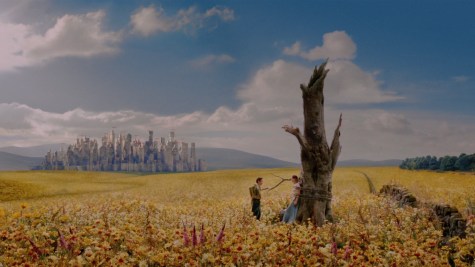