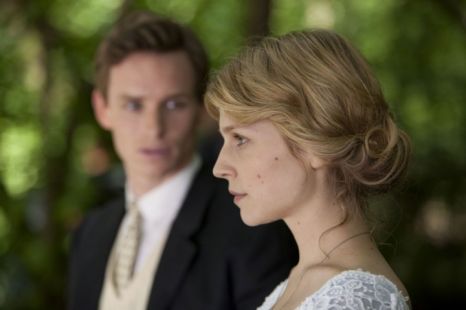 Sumptuous and moving, writer Abi Morgan (Shame, The Iron Lady) and director Philip Martin (TV's Prime Suspect: The Final Act and Wallander) have crafted a meticulous, deliberately paced film of Sebastian Faulks' best-selling novel. Forget about the fact that it was produced as a two-part television drama broadcast on the BBC in the UK and on PBS here in the States; Birdsong displays exquisite filmcraft. However, it's also driven largely by recycled clichés stolen from All Quiet on the Western Front, The End of the Affair, The English Patient, and other war stories and doomed romances. Despite being a remarkable technical achievement and its fine performances, Birdsong's story is inescapably familiar.

The film takes place along two separate but intertwined chronological lines. The first begins in 1910, when Stephen Wraysford (Eddie Redmayne) moves from London to Amiens, France, to take an executive role at a textile factory owned by René Azaire. Wraysford moves in with the Azaire family for what is expected to be a limited stay. There, he quickly falls in love with Azaire's younger wife, Isabelle (Clémence Poésy), in an arrangement that we know from the get-go will not end well.

The second narrative thread running through the film begins in 1916. Wraysford is a lieutenant in the British Army, fighting in World War I France. Weathered and aloof, Wraysford is feared by his fellow soliders. A mishap involving a troop of engineers leads to Wraysford developing a bond with miner Jack Firebrace (Joseph Mawle) which lasts to the war's conclusion. Meanwhile, Wraysford continues looking for Isabelle, although their eventual reunion is not to his satisfaction.

This complex plot never feels convoluted or confusing. Morgan and Martin have jettisoned much of Faulks' novel in the interest of cinematic simplification, allowing them to focus on the key relationships: those between Wraysford and Isabelle, and between Wraysford and Firebrace. The beautiful visuals and methodical pacing emphasize these relationships at every opportunity, as do the performances by Redmayne, Poesy, and Mawle in particular.

Birdsong is a rarity in that it requires its actors to carry out a good deal of their work without dialogue. Silence is a challenge for most actors, although I am given to understand it is one that is often welcomed and even relished. In any case, Redmayne, Poesy, and Mawle bear up extremely well under that challenge here. Even when dialogue is spoken, an unusual amount of it is delivered in very low whispers, making it both difficult to hear and oddly captivating.

My criticism of the film revolves around the plot, a by-product of Faulks' novel. While melodrama has its own qualities (over-the-top emotion, anti-realism, stylized visuals) and Birdsong revels in them, melodrama is not entitled to cannibalization any more than any other genre. In Birdsong, viewers will recognize a whole array of tropes and plot elements lifted from other, better stories, re-arranged in the hope that their juxtaposition might disguise their familiarity. Nonetheless, ideas from Erich Maria Remarque, Graham Greene, and Michael Ondaatje that were so original in those writers' hands remain tied to those works. A war that separates lovers, a doomed and passionate affair, and the horrors of World War I: these are themes that have been treated (repeatedly) by other authors who were inspired to explore them from particular angles and for particular reasons. Here, they are merely shuffled, without much animating passion, into a new arrangement for the sake of dramatic impact - a strategy that does not lend itself to authenticity.

Image and Sound
PBS's beautiful Blu-ray presents a near-flawless image at 1.78:1. The soft, beige-infused hues of the film's color palette seem as though they might be subject to rough digital break-up, but the transfer renders every shade of gray, cream, and mocha with great fidelity. The 5.1 surround audio track seems more interested in ambient effects and Nicholas Hooper's treacly score than on dialogue, which, as I mentioned earlier, is often borderline inaudible. Still, the track is an effective one in its way, guiding our ear away from the less-important dialogue so that we focus our eyes more on the actors' faces, which in Birdsong are all-important.

Bonus Content
A trio of mildly interesting mini-documentaries ("The Love Story," "Behind the Scenes," and "The War Story," totaling approximately 40 minutes) merely scratch the surface of the historical, thematic, and production aspects of the film.

Flawed and predictable, Birdsong is a success thanks to the keen directorial eye of Philip Martin and the outstanding performances of its lead actors. It is enthralling entertainment - but we've most certainly seen it before. Recommended.