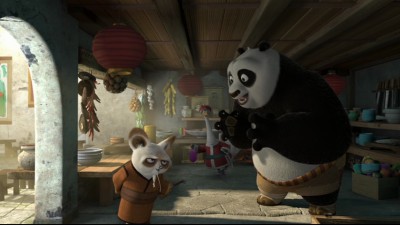 Kung Fu Panda Holiday has just been released on this Blu-Ray/DVD set, but it originally aired in 2010 on the NBC network (with its annoying onscreen logo and more than five minutes of commercials) so this would place it before the movie Kung Fu Panda 2. The holiday in question here is not Christmas (despite a label on the outside of the package saying "New for Christmas") or Life Day for that matter, but the Winter Feast at the Jade Palace. Master Shifu (voiced by Dustin Hoffman, as in the movies) calls on Po the Panda (Jack Black) to be the host of the Winter Feast, to be attended by all the "masters of kung fu". However Po is torn when he wants to invite his "dad" Mr. Ping (James Hong) and Shifu tells him the event is only for the masters. Meanwhile Mr. Ping plans his own neighborhood get-together at his noodle restaurant at the same time, and Po has to decide which gathering is more important.

At 21 minutes before the end credits, things move rather quickly but it's entertaining enough. The animation is on par with that of the two Kung Fu Panda movies, and the rest of the main voice cast from them is present here as well (including Angelina Jolie, Seth Rogen, Lucy Liu, David Cross and Jackie Chan).

The special is of course presented here free of any intrusions or interruptions, and comparing parts of the original broadcast I found on YouTube the presentation here is seamless with no pauses where the commercial breaks were. 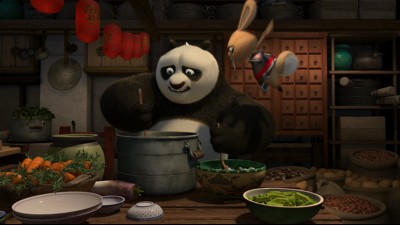 Kung Fu Panda Holiday looks VERY good on Blu-Ray, almost too good considering it was made for TV. There is a lot of detail in the animation and it looks just about perfect here. (From what I sampled of the included standard DVD, that looked about as good as what that format is capable of.) The only reason I did not give this a five-star rating for picture quality is that it appears this was produced in 3D, judging by a Stereoscopic Supervisor credit for Phil "Captain 3D" McNally, who has worked on other DreamWorks 3D animated movies. The Blu-Ray disc is not in 3D and if this actually was produced that way it would have been nice if they had included it. (The second movie in the series was released in 3D, and the first movie was re-rendered in 3D for a Blu-Ray release.) 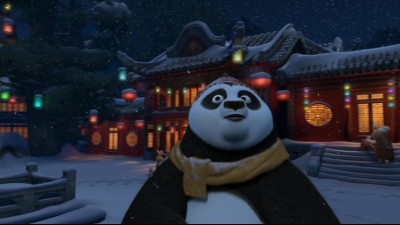 The sound mix here is very impressive considering it was produced for TV. The Blu-Ray is in 7.1 Dolby TrueHD with very active surrounds including some dialogue traveling to the rear. French and Spanish dubs in 5.1 Dolby Digital are also included. (The standard DVD includes all languages in standard Dolby Digital 5.1 and still sounds very nice. There is also a 2-channel Pro-Logic mix on the DVD.)

Subtitles are also included on both discs for the special and all extras in English, Spanish and French, with the Blu-Ray including English subtitles in both standard and SDH style (where sound effects and other important sounds are described). The DVD includes standard TV-decoded closed captions.

Both discs include the same extras (in hi-def on the Blu-Ray). There are a couple food-related ones here which made me hungry: one showing a chef at a Beverly Hills Chinese restaurant making noodles, another showing kids how to use chopsticks. (I've tried those myself several times, but am too impatient an eater and usually switch to a fork before too long.) There is also "Learn to Draw Wo Hop" where head of story Tom Owens draws a supporting rabbit character explaining the steps he uses. (He makes it look so easy...)

Then there are two "Holiday Shuffle" games, a variation of the old 'shell game' where you get three objects, something is hidden under one of them and shuffled around, then you have to pick which one has the hidden object under it. These appear to go on endlessly until you decide to stop. The Blu-Ray games appear to just use video footage like the DVD, and not any fancy overlayed graphics or sound capabilities.

Finally both discs have more than their share of trailers and promos. Both discs open with trailers (in HD and 5.1 on the Blu-Ray, but only Pro-Logic on the DVD) for Rise of the Guardians (looking and sounding VERY good by the way, can't wait to see this in 3D), Madagascar 3 and a direct-to-video program called "Madly Madagascar". If that's not enough for you, you can manually select these previews again from a "Previews" menu along with promos for "It's a Spongebob Christmas" and the latest "Teenage Mutant Ninja Turtles" series. But wait, there's still more- another section called "World of DreamWorks Animation" (which seems to be showing up on most of their discs lately) gives you a series of clips and promos for Shrek, Puss In Boots, How To Train Your Dragon (including a promo for a live stage show!), Madagascar (again), Kung Fu Panda, and Megamind. 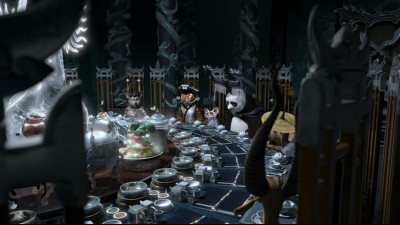 Kung Fu Panda Holiday is technically WAY above average for a TV special, and fans of the movies should love this.

Pictures here were taken from the included standard DVD.