6 Degrees of Hell is a rather confusing horror film, so much so that I had to watch it a second time with the subtitles turned on and reading them to get a better idea of what was going on. The story is primarily about an attraction called the Hotel of Horror, a haunted-house type of deal where people go in and see weird goings-on, actors pretending to be psychopaths carrying fake weapons and stuff like that. (The interesting thing is the Hotel of Horror in this movie is actually a real attraction in Saylorsburg, PA, although the events in the movie itself are fictional.) In the movie, the attraction is run by Jack (Brian Gallagher), who is always looking for ways to make the place even scarier. He finds an old psychic who has a large collection of "haunted objects" collected over her years of experience which she rents out for use at the hotel, but warns him that they really are possessed and will cause problems if he actually puts them out. 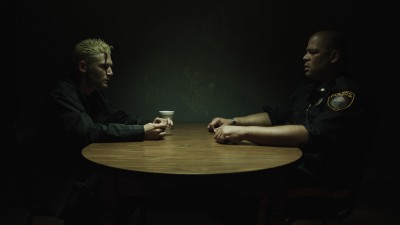 Although Corey Feldman gets top billing and is featured most prominently on the cover, his screen time is very short. He plays Kyle, a paranormal investigator who goes to the town to check out the events after everything has already happened and asks police deputy Hendricks (Brian Anthony Wilson) a number of questions. They talk in a room while bleached-blonde Corey smokes an E-cigarette. Essentially these scenes are what is happening "now" and the rest of the movie is flashbacks. What makes this confusing is that there are a number of flashbacks within this as well as the characters recall past events. In my second viewing I mainly tried to figure out when each scene was supposed to be taking place.

The characters who get the most attention are friends Kellen (Joe Raffa, who also directs the movie), Chris (David J. Bonner) and June (Nicole Cinaglia). Kellen is friends with Jack (there's a suggestion he came close to marrying his mother at one point) and helps him out with the hotel. June has psychic abilities herself and is struggling to learn how to handle them properly. There's also a subplot about a ghost-hunting TV show whose crew also come by to check out the hotel and events that happened there long ago that made it "haunted" today. For good measure a local cop is thrown in who has a personal grudge with Kellen and keeps watching for him to get into trouble. 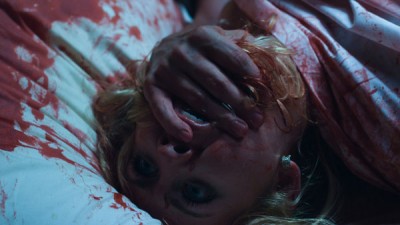 The main problem with this movie is that it is hard to follow and figure out the significance of many characters. Again, it's sometimes confusing enough trying to figure out which scenes are flashbacks and when what you're seeing is supposed to be taking place. This being a small production doesn't help matters much either. One visual effect that plays a large part here is of characters' eyes becoming completely black- this has been done in plenty of other movies, but here it's painfully obvious that the blackness has been overlayed digitally. Some gore effects look equally fake.

The main "payoff" of 6 Degrees of Hell is near the end when the Hotel of Horror actually opens and basically all hell breaks loose. Some may actually find it worth having sat through the rest of the movie to see, others may just laugh at it as I did. Without spoiling the ending, I'll just say that it cuts to black right when you THINK something interesting is finally going to happen, likely electing groans from many viewers. 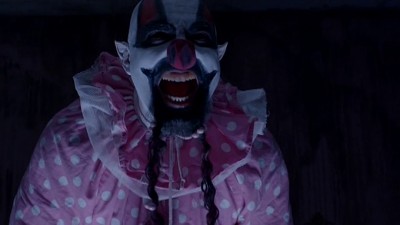 6 Degrees of Hell was shot digitally (at full-screen 1.78 aspect ratio) but looks close enough to real film. Details look good on the Blu-Ray disc although the brightness seems just a tad high. As mentioned previously, the fakeness of some visual effects is very apparent- overall the production is on the level of something made for cable or straight-to-video.

A 5.1 DTS-HD Master Audio track is featured as well as a standard Dolby Digital 2-channel mix (for people who are still using their TV's speakers, I guess?) Both sound good with clear dialogue, although you can hear some obvious editing in many scenes. There are few surround effects but some decent LFE scares.

Subtitles in "SDH" format are included, using small lettering that is sometimes hard to read. I watched the entire movie a second time with them turned on and they helped a little to understand this complicated movie. Most characters have their names shown in brackets when they are speaking.

The Blu-Ray disc includes a good amount of extras showing the people behind the movie. There is footage of the movie's "World Premiere" at a small single-screen theater near where the movie was shot where the cast and crew make appearances. Most of the people in attendance seem excited to see a movie being made in their small town. The theater looks pretty nice too, except that as patrons arrive we can see they left the screen curtains open in order to show ads on the screen (real classy, guys) with a blue-screen projected as people go onstage to introduce the film. (Likely no 35mm film prints of this movie were ever made, but I'm wondering if the theater showed an actual DCP which is standard for digital movie presentations or if a consumer-grade disc was projected.)

Next is a 10-minute making-of piece starting with writer/producer B. Harrison Smith explains that he got the idea for this movie after a visit to the real Hotel of Horror and seeing one of the actors being tied down saying "They're REALLY killing me, this is REAL!" Then we get to see some behind-the-scenes footage and photos with the usual talk about how great everyone was to work with.

A 14-second blooper clip with Corey Feldman reacting to a noise off-camera (he gets bleeped) gets its own menu selection, then there's an interview with him and B. Harrison Smith by a local journalist in compressed internet-quality video. Corey comments that he's "carved a nice little niche in the horror genre" but doesn't care much for it personally as he's become more spiritual nowadays. Then there's an amusing 5-minute segment "Joe Versus the Hotel" where the director and some friends go through the real Hotel of Horror with a night-vision camera. After that are fake commercials for the ghost-hunting TV show and haunted hotel in the movie, and then a "Photo Gallery" with mostly stills from the movie accompanied by music from the film (similar to what many adult DVDs have included for a long time, which I find rather pointless.) Finally we get 3 trailers for 6 Degrees of Hell and trailers for Dust Up and K-11 in hi-def and The Fields in 16x9 standard-def.

6 Degrees of Hell is overall disjointed and the kind of movie many casual viewers may fast-forward through or turn off early (I of course never do that, no matter how bad the movie is.) I'm sure some will watch this just for Corey Feldman then feel cheated at how small his part is. At the very least though, from the extras it looks like those who made the movie had a lot of fun, and that almost makes me feel bad for saying anything negative about it. Better luck next time, guys. The real Hotel of Horror looks like fun too, and I'll check it out if I'm ever in the area.

Pictures in this review were not taken directly from the Blu-Ray disc.