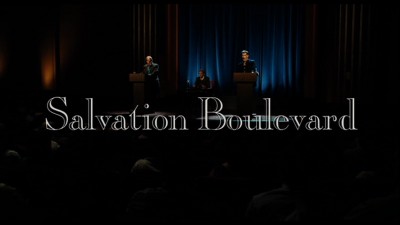 
The Movie
It's hard to understand why megachurches exist. These organizations, which have buildings the size of sports arenas, and in some cases they actually were sports arenas, in order to bring people together to worship. Why? What's wrong with a small local church? What is the advantage of cultivating religious membership on such a massive, yet concentrated scale. Well, it certainly seems like money is part of it, as many of these church pull in incredible amounts of money, and they look the part, with stunning facilities and services that seem more like arena shows than spiritual observances. Much like a large college class at a public university, there's no way for the teacher to know all those he speaks to, and like the gilded world of the Catholic church, there sure seems to be an emphasis on costly aesthetics, when the ranks of the hungry and needy continue to grow.

Such is the case with Pastor Dan Day (Pierce Brosnan), who's got not only a megachurch, but a planned community in development, The City on the Hill, which will give him a base of power (and revenue) far exceeding that which he currently earns from his books and speaking engagements. But that's all at risk when he is involved in an accidental shooting, and, with the help of his anger-fueled video tech Jerry (Jim Gaffigan,) attempts to pin it on quiet Carl Vanderveer (Greg Kinnear), who was "saved" from a life of sex, drugs and Grateful Dead shows by the church, through his wife Gwen (Jennifer Connelly.) Thus kicks off a church-wide conspiracy, and a deepening spiral for Pastor Dan, exacerbated by the appearance of a Mexican drug lord with info on the case, and the only help Carl can find is in another Deadhead, stoner college security guard Honey (Marisa Tomei.) 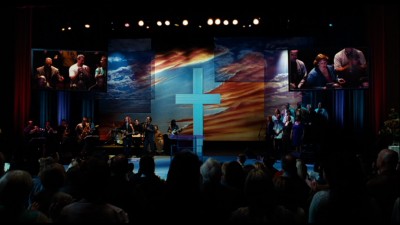 Though the story of Carl, one of many simple-minded film heroes buffeted by forces far more powerful than himself, is an interesting one, as he find his life in danger for the simple fact that he's following the teachings of the church he believes in, it really should be Pastor Dan who takes center stage. A man whose world is swirled in the sins he preaches against, Pastor Dan offers an opportunity to really explore religious hypocrisy and the depths a man will sink to, in order to fulfill his dreams. Unfortunately, outside of some minor beats, that doesn't happen, as he's pushed into the background by the wackiness that Carl endures from a cast of characters that could be inspired by either the Coen Brothers or Elmore Leonard, but just aren't as engaging a group as that inspiration should result in.

Fortunately, it feels like none of this can be blamed on the actors, who all turn in fine performances with the material they have to work with, led by co-writer/director George Ratliff, who continues his trends of making films with religious themes or great casts. Brosnan is a great fit as a man of God with a shaky moral foundation, as is Kinnear as a guy without direction whose simple life is unfairly taken from him. Meanwhile, Gaffigan smoothly breaks character as a completely creepy guy whose character takes full advantage of the persona he's established, and Tomei's just plain likable. Only Connelly doesn't come off well, but that's the way her character is written. One wonders what this film would be like with a lesser cast, because it struggled with an all-star line-up, with a final 20 minutes that seemed to be pressed for time, while yet not having a tremendous amount of tale left to tell. 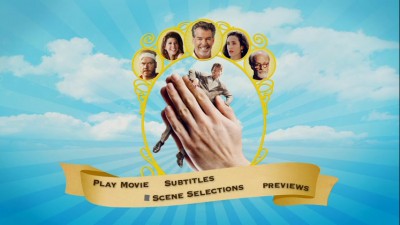 The DVD
Delivered in a standard keepcase, this DVD has a static, anamorphic-widescreen menu, with options to play the film, select scenes, adjust languages and check out some previews.) There are no audio options, though subtitles are available in English, English SDH and French.

The Quality
The anamorphic widescreen transfer is surprisingly dark during interior scenes, though it does deliver a nice level of fine detail and appropriate color. When outside, everything looks much better, with no problems with digital artifacts. Outside of the excessive darkness, it's pretty nice overall.

The audio is delivered via a Dolby Digital 5.1 track that's surprisingly active for a film that's light on action. Dialogue is crisp and clean, holding court in the center channel, while the side and rear speakers deal with special effects and the film's score. Most of the film leans toward the quiet, but you shouldn't have a problem understanding, and the subtlety makes the louder moments really stand out.

The Extras
There are some previews, but there are no extras related to this film. 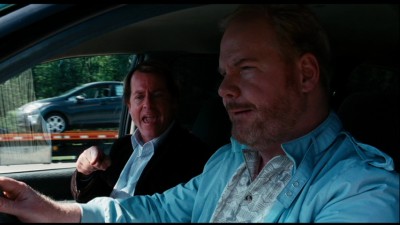 The Bottom Line
Approaching this film, expectations were high thanks to a big-name cast, but the story didn't help the film reach those heights, and though the performances are good, the overall film is disappointing as a result. The presentation is solid, if a bit dark, but there are no extras at all, making it hard to encourage a purchase. If you're looking for a high-quality black comedy about religion however, you're better off with either Peter Medak's