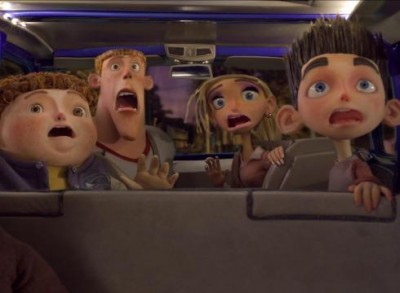 Your first hint that Chris Butler and Sam Fell's ParaNorman might not be your average family film comes early--from the first frame, in fact, since the picture opens with a grindhouse-style "feature presentation" bumper, and proceeds to give us an opening scene not of this story, but of a scratchy print of a zombie movie. It's being enjoyed by young Norman Babcock (voiced by Kodi Smit-McPhee) and his grandmother (Elaine Stritch), which causes some concern among the rest of the family, since grandma's dead.

It seems that young Norman sees and talks to dead people, which makes his classmates view him, rather expectedly, as something of a freak. There are plenty of ghosts for him to see in the little New England town of Blithe Hollow--it has a rich history of witch-hunting and other foolishness, and the most famous of its witch stories is creeping up on its 300th birthday. And, come to find out, that witch is still pretty pissed off about it.

ParaNorman is a witty, winning, utterly delightful movie with a cockeyed world view and a genuine sense of play that's altogether too rare among films geared to the family audience. Equal parts ghost story, coming-of-age tale, and slapstick comedy, it's like an '80s Sam Raimi movie toned down and repurposed for kids (but not the smallest ones; parents should be advised that there are some genuinely scary and creepy moments). It has the expected laughs and technical innovations, but it's also wildly weird and off-balance--and thank goodness for that.

It comes from the auspices of Laika, the stop-motion animation specialists responsible for Coraline, and like that picture, it has a handcrafted, artisan sensibility in both style and tone. The look and feel (and I use that word in both the general and tactile sense) of ParaNorman is detailed and impressive, the surfaces and environments realistic yet slyly stylized, and the 3D is thankfully restrained--mostly serving merely to add (aha) dimension. And that opening quotation of the grindhouse aesthetic isn't the only shout-out to genre cinema; there's certainly homage present in the Sixth Sense-inspired story, but the real fun is in spotting the sly visual references to horror films sprinkled throughout Butler and Fell's frames.

But the film isn't just a game of guess-that-shot; it's got some heart to it, vividly dramatizing the loneliness of the school oddball, and it's filled with gregarious and frisky voice work by its strong cast (particularly Jeff Garlin as Norman's exasperated father and Anna Kendrick as his perpetually embarrassed sister). It drags a bit in the clutch, but the resolution is surprisingly sweet and heartwarming, without contorting or compromising the darkness or manic comic energy of what's come before. ParaNorman is a boisterous, high-spirited good time; it's a real treat, and one that older audiences may very well enjoy more than the younger ones it's being pitched to.