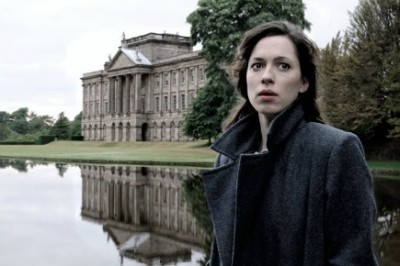 The Awakening's general premise (and opening scene particularly) recall Red Lights, from just a couple of weeks back; the broad strokes are reminiscent of The Others and last spring's Woman in Black; hell, there's even a shout-out to Psycho, with a replication of the peephole shot that rivals Gus Van Sant's. There's very little that's original in The Awakening, but that's not its downfall (if homage were grounds for dismissal, we'd have heard nothing from Tarantino since '91). The trouble with the movie is that there's nothing in it that's particularly fresh or intelligent. It's a movie that goes through the paces until arriving at its astonishingly goofy twist ending, at which point the whole picture goes into the toilet.

That's a shame, because it is also a starring vehicle for the wonderful and undervalued Rebecca Hall, and she's quite good--better than the material deserves, really. Hall is, simply put, a very interesting actor, and her effortless projection of keen intelligence is just right for the role of Florence Cathcart, a highly educated skeptic who exposes fraudulent ghost stories and schemes. Her latest caller is Robert Mallory (The Wire's Dominic West), teacher at a boarding school with a history of ghost sightings. A child was reportedly murdered in the building back when it was a private home; a pupil has recently followed suit. Florence exposes the recent sightings as the work of a student prankster, but her work somehow doesn't feel complete, so when the students leave for holiday, she stays behind, along with school matron Maude (the wonderful Imelda Staunton) and a lonely orphan boy named Tom (Isaac Hempstead Wright).

There are harder things in the world of cinema than creating a tense gothic atmosphere with this kind of rattling-around-in-a-big-scary-building set-up, but the task is still skillfully performed, and the first half or so of The Awakening is promising. It's low-key (perhaps to a fault--the expositional scenes are a little drowsy), but director Nick Murphy is admirably restrained in his shock effects, there's some genuinely creepy stuff in here, particularly the business with a very scary dollhouse. And the progression of Hall's character is fascinating, as she starts to question what she sees, and the skeptic inches towards becoming a believer (switching places with the believers around her).

But it all goes to shambles in the third act. First comes a rather jarring turn toward perversity and sexual violence that's altogether incongruent with the spooky ambiance that's been so carefully constructed (and, on reflection, doesn't really add much of anything other than cheap thrills for a certain segment of the audience); then comes the surprise twist that, without spoiling, not only doesn't work at all, but requires the discarding of scenes by the handful. The payoff is, to put it politely, a stretch--and one that requires reams of explanatory dialogue.

Too bad. Hall is such an engaging presence--stern yet vulnerable, wise yet curious--that this viewer wanted, badly, for the film to play, and West and Staunton both have their moments. But The Awakening, though moody and atmospheric, is mostly a mess.