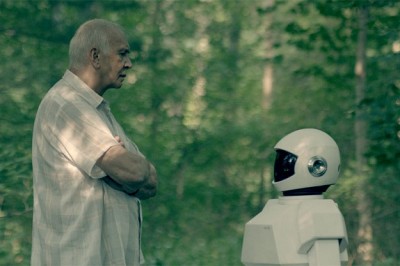 Frank (Frank Langella) lives in Cold Springs, New York, in "the near future." He lives alone; there is a wife who left some time ago, and two adult children. Madison (Liv Tyler) is a world traveler, always video-calling from some exotic location (a nice touch: even in "the near future," the signal is still choppy and lousy), while Hunter (James Marsden) lives several hours away, but close enough to pop in on the weekends, since his father... well, he doesn't need to be in home or anything, not yet. But he's maybe a little senile, occasionally forgetting things. However, he has not forgotten how to steal--that's what landed him in prison years ago. He shoplifts, but that's more to break up the boredom, which also seems to be the cause of his daily flirtations with the town librarian (Susan Sarandon). He doesn't really think about pulling jobs again until his son brings him the robot.

And that is the rather delicious set-up of Jake Schreier's Robot & Frank, which imagines a world where robots have developed to a point of domestic servitude, and then further imagines that one could be taught how to pick locks and crack safes. It actually makes sense that he'd go along with it; after all, he's to help Frank get healthier, and to occupy his mind with projects. Planning to rob the yuppie dick down the street is certainly a project.

It takes some time for him to get used to the robot, of course; when his son first presents him with it, Frank wryly predicts, "That thing is gonna murder me in my sleep." Finding such a fine utility for the little guy begins to make Frank more tolerant of him, even when he scolds after their first job, "That was more dangerous than you led me to believe, Frank." That voice is provided by Peter Sarsgaard, who gets exactly the right tone of perky helpfulness (after picking the lock for his master, he cheerily notes, "I'm starting to the get the hang of it!").

Director Schreier has fun with the visual execution, regarding his modestly modulated future world casually, mostly concentrating on formulating striking compositions with his human and mechanical leads; he loves to put the two of them in medium wide shots for maximum contrast, playing up the odd-couple buddy element. Christopher D. Ford's script latches on to the inherent fun of the heist genre--the planning, the execution, and (hopefully) the getaway--but the picture's cleverness lies in its ability to play to those expectations while mixing in enough warmth and human comedy to raise the emotional stakes.

Those stakes are real; there's a little twist which I'll admit blindsided me, and a moment of tenderness near the picture's conclusion that could have played silly, but is instead unexpectedly moving. In a moment like that, it sure helps to have an actor of Langella's skill on hand. He's marvelous throughout in a role that seems custom-made for him (perhaps it's just a coincidence that he shares the character's Christian name, but I doubt it). There are some complications with the Tyler character that seem a bit forced and false, contrivances to pad the running time, but they don't do any real damage--this is a modest but memorable picture, and a testament to the considerable gifts of one of our most consistently engaging actors.