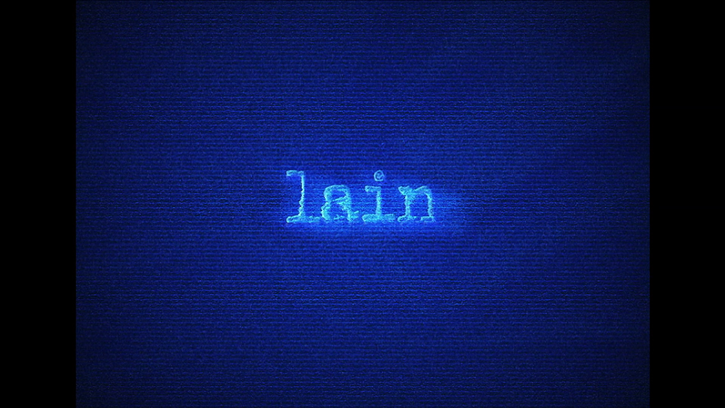 Serial Experiments Lain is one of the weirdest anime series of all time. It sounds a lot like a big hyperbole to begin with that kind of statement, but I don't consider it one. This is genuinely an incredibly odd and offbeat series with a twisty sci-fi narrative that questions the path of human existence, the role of technology in society, and many philosophical questions about people in general. This isn't a cookie-cutter anime series or even a massively plot-driven one. It's a big, weird, and fascinating experience in thought-provoking anime. It inspired the creation of The Matrix. It redefined the way many anime fans thought about the genre as a whole.

The series begins with a horrific suicide by a student, and an e-mail that begins to spread around the school she attended. The girl who died apparently sent a message to some fellow students. It doesn't take long for Lain to hear about this, but she is probably the last classmate to find it out anyway. She doesn't connect to "the Wired" and doesn't seem to know much about it. This is a technologically innovative network that connects people and technology directly through some unconscious communication signals that allow for people to enter (and perhaps leave) the land created by the Wired. Or is it the other way around, and data exists to enter reality? What is an existence in this system? These are the types of bizarre questions this series poses, and Lain is someone who begins to unravel her own strange journey along the way.

The series soon shifts to the character of Lain: lonely, often isolated, and incredibly introverted - far more than most. She has few people she can call friends and she is not even someone with parents or family to really connect to. She's got a mother who doesn't seem to grasp her or want to spend time with her, and a father who shows obsession with technology to the point that it's the main driving force in his life. She is distant from those around her. She tries to make friends, to join in with her classmates, and to understand the network known as "the wired". Lain isn't just relegated to staying as a shy 14 year old girl, and over the course of the story she develops so many more "personalities" that it becomes clear that Lain is not just a single-person or entity. It's something that shifts over the course of the series and becomes more complex. What causes this to happen with Lain? The series is bizarre and nightmarish in this regard. It's certainly one of the more weird aspects of any anime. 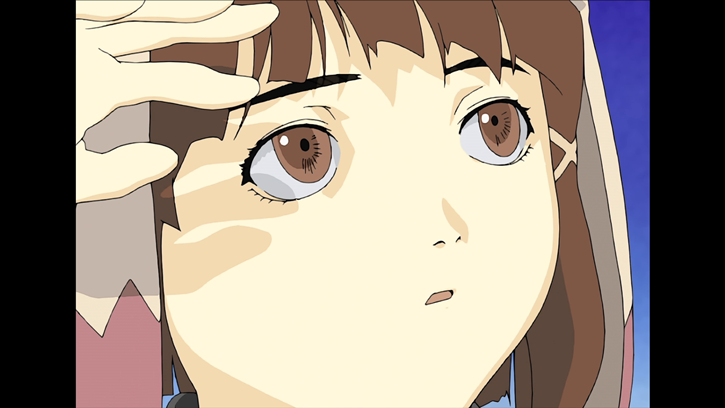 The show has only thirteen episodes. Some of them feel so much more about laying out some philosophical ideas about society, technology, and the world in general that it's not as focused on a linear plot. Sometimes the series seems to be making sense. Then sometimes it seems to be making no sense at all. The one key element remains: originality. Serial Experiments Lain isn't a series like any other anime. Other anime series have tried to emulate its unique qualities, failed, and continued to try to replicate it again anyway. I'm of the opinion that the series never wholly succeeds on its own either: it's a show that is successful in parts, and disappointing in some of it's others matters. It's also so weird and bizarre that it won't be wholly successful for those who are not necessarily on board for then entirety of this weird mind-trip. Those who can may love it, and those who can't may be fascinated by it even if it leaves them feeling a bit cold. Maybe that is part of the point.

Serial Experiments Lain is a bit of a divisive series for anime fans: either you'll find the series fascinating or you'll be both perplexed and annoyed by it to some degree. I find myself sitting middle-ground with this particular series. It's easily one of the most unique and artfully done anime series that I have seen. I'm a fan of how creative and original this series is. However, I also find some aspects of it a bit tedious and underwhelming. The ending is also vague and it confuses rather than elaborates. I'm sure others will disagree but I always found the show as something distinct, worthwhile, but not altogether brilliant. I find it worthy, but overrated as something to truly be called out as definitively "brilliant".

I consider this an altogether well-done series but one that doesn't necessarily hit a perfect home-run like some anime fans are going to claim. It's worth checking out for most anime fans who appreciate science-fiction, horror, and trippy anime series that are a bit thought-provoking and quite different from the normal anime expectations. This is certainly a bold, original, and smart series (to some degree). It's just that it's befuddling at the same time as it is thought-provoking. It makes me feel like scratching my head in confusion. If that sounds like a series you might be interested in, it might be a series you love... or one that has you even more perplexed than I've been. 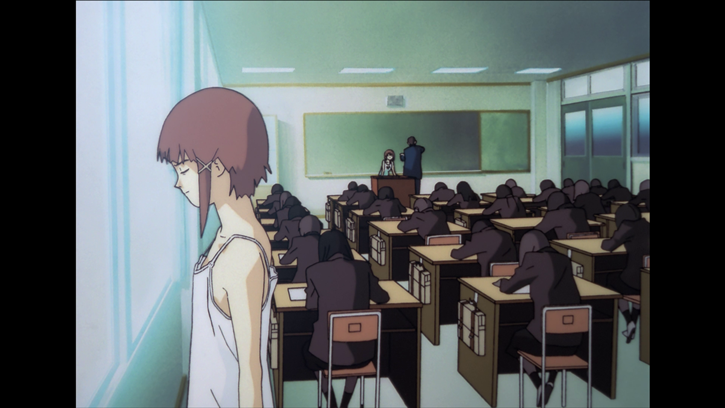 There seems to be a lot of controversy surrounding the picture-quality on this release from Blu-ray enthusiasts who have gotten the set already. I am a bit surprised by the downright negative reactions. The transfers have obvious flaws, including video banding issues (especially found with the first disc) and gamma issues. The lines are a bit less detailed and refined than what a majority of fans might be hoping to find, and some of the faults reminded me of the letdown from the somewhat sub-par FLCL Japanese Blu-ray upcovert. However, the series has never looked better before in North America.

I have also heard claims that the breathing room on the discs isn't even good enough for these episodes - that too many episodes have been included on each disc. I do not agree with the sentiment, and find the average bitrates of 25-30 mbps is acceptable. Most of the video flaws are also a result of the way the series was originally animated and created using technology. The technology of the time was different than it is today, and a lot of hard work went into restoring the show for a High Definition era. The included booklet on the restoration even points out some of the issues that fans have pointed out as disappointing flaws with the picture quality on these Blu-ray discs - the people responsible for restoring this series were aware of the issues and even reference them in this restoration booklet. Disappointed fans can complain as much as they want, but Funimation isn't likely to re-release the show with newly authored discs with higher bitrates or go back and attempt a re-do of what was already a massive undertaking for the Japanese Blu-ray release. Serial Experiments Lain may have a flawed debut in 1080p High Definition, but it's still an acceptable presentation that offers a worthy upgrade over previous editions of the series on home media, and it retains the original television broadcast aspect ratio of 1.33:1 without any annoying tinkering with that aspect of the presentation.

Serial Experiments Lain sounds pretty good in lossless Dolby TrueHD 2.0 audio. It's not going to knock your socks off (so to speak), but it will maybe make you realize how much better this series sounds with a good HD audio presentation. The sound in clean, crisp and absorbing as a whole - this is a high quality sound presentation. The dialogue is easy to understand. However, nothing is particularly exciting during the soundstage. The opening and ending theme music is beautiful to hear in lossless and the occasional sound effects are impressive, but this show is a mostly quiet one with less going on with the soundstage. There are few moments of score and other sound design elements that one might typically find. It's a creative element of this series. Serial Experiments Lain has a minimalist sound-design approach, and it blends into the weird, occasionally (okay... mostly) bizarre atmosphere, and these elements work well for this series.

Viewers can choose between Dolby TrueHD 2.0 audio on the English language dub or original Japanese language dub. The English dub sounds slightly more involving, but I thought that the Japanese dubbing was a bit better for this series. Either option should work well. In this case, I would consider it something that is just a matter of preference.  English subtitles are provided. 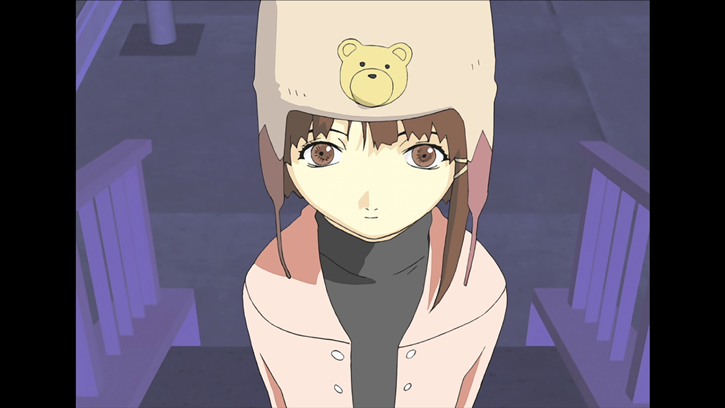 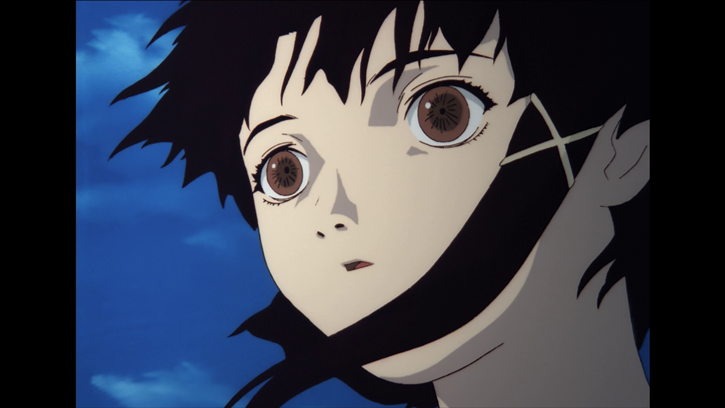 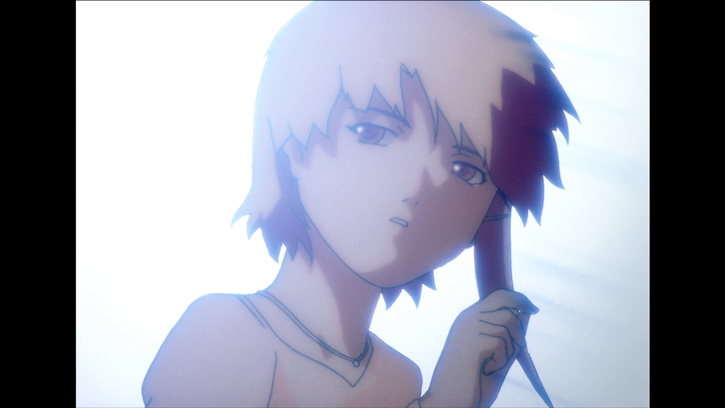 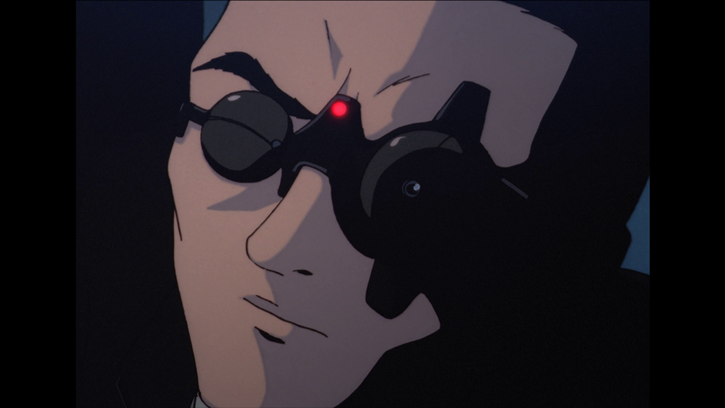 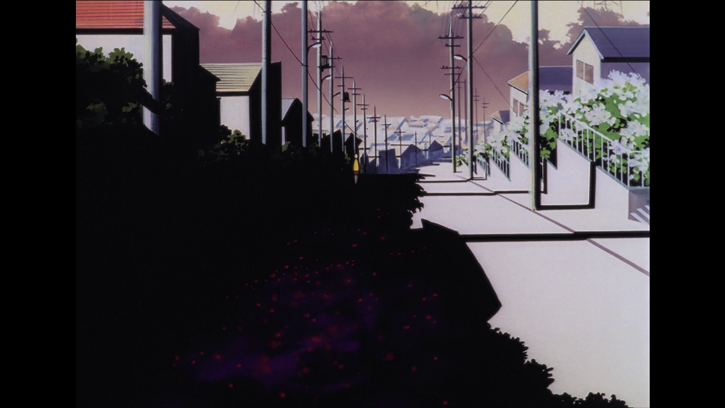 This is a combo-pack release containing both remastered Blu-ray and DVD editions of the series.

Serial Experiments Lain has been released with a deluxe art-box, containing two standard Blu-ray sized cases inside of the outer case (one for the two Blu-ray discs, and another for the two DVD discs). Each case also contains reversible cover art featuring additional Lain artwork. It highlights some fan-favorite art. There is also a high-quality softcover book entitled "Inside Serial Experiments Lain"; this is an artbook with 320 pages of production art, sketches that essentially were used as blueprints for the series character designs, landscapes, and more. 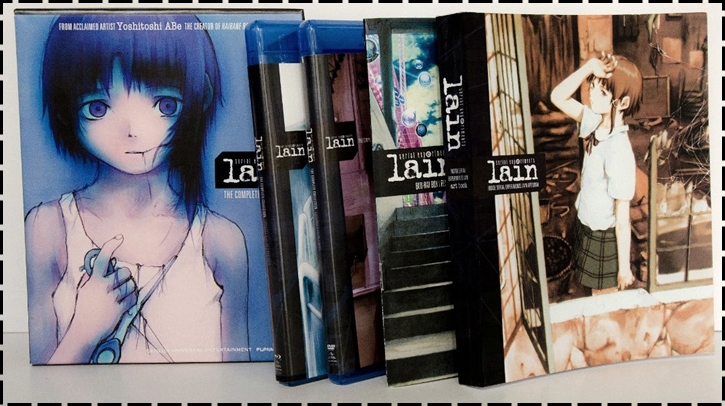 There is also a brief booklet containing a conversation between Ueda and Saito about their restoration work on the series, e-mails from Saito, and additional full-color artwork pages. Included on the bottom of each page (excluding the artwork inclusions) is a dictionary of restoration terms and what each means. Fans will find this useful given the occasionally problematic restoration results. This booklet helps to "make sense" of the restoration.

On disc extras include a promotional video, an original commercial, textless opening/ending songs, the U.S. trailer for Serial Experiments Lain, and trailers for other Funimation releases. These supplements are slim and underwhelming, but the extras included with the set help to make up for a lack of interesting on-disc supplements.

The quality of the artbox, artbook, and booklet is entirely impressive. This is easily one of the nicest looking releases of the year in terms of the packaging presentation. This set is one of a select few sets to receive this kind of treatment, and it's arguably the nicest looking set that Funimation has ever put out on the Blu-ray format. It's a top-contender for the best of 2012. 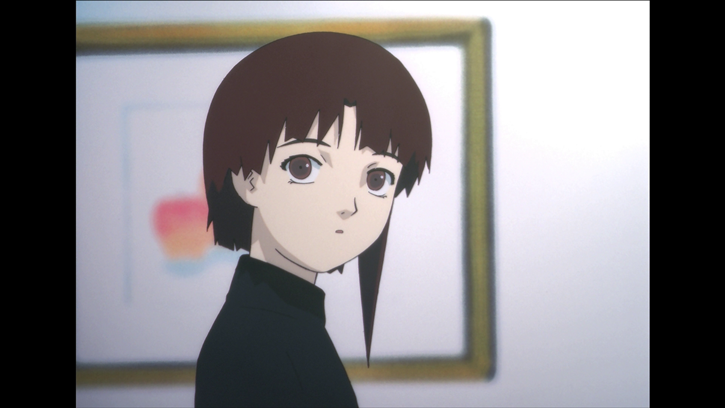 As long as you can call yourself a fan of the show, the Blu-ray set is absolutely one worthy of a place in your collection. The transfers aren't perfect - but a huge part of that is because of the way this series was originally made in the first place. I wouldn't expect a better release of the series to ever be released. Essentially, this is a definitive collection. The PQ has a few minor issues, but the presentation of the packaging and all of the notable inclusions here (along with transfers that are still significantly better than the prior DVD editions) is something to consider when deciding on a purchase. Personally, I still find the series a bit more convoluted than most and wouldn't necessarily consider it a "must own" show.  However, I know that any fan that is serious about owning Serial Experiments Lain will want to have it on Blu-ray in this jazzy, fun, and well-made edition.