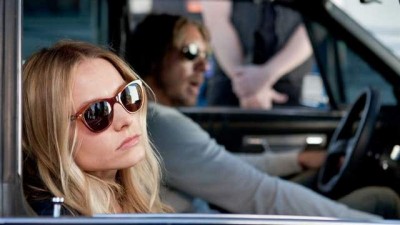 Dax Shepard and David Palmer's Hit and Run is not a great movie, not by a long shot, but boy is it a hard movie to hate. Tonally, it's a bit of a mess, an uneasy hybrid of '80s action/comedy homage, Tarantino-esque two-handers, and heartfelt relationship stuff--something like a True Romance remake directed by Hal Needham. So it's too busy and too scattered, but honesty must prevail: I laughed often, sometimes heartily. And the film almost solves the increasingly perplexing dilemma of what to do with Kristen Bell.

Last part first, because that's what's most interesting: Bell is an unreasonably bewitching and unquestionably charismatic performer who cannot get into a good movie to save her life. Her three-season performance in the title role of Veronica Mars is one of the most interesting pieces of acting work that medium has seen in the past decade or so (which is no minor accomplishment), but with the exception of Forgetting Sarah Marshall, she hasn't managed to find a film vehicle worthy of her considerable talents. Her lesser pictures have wasted her (Couples Retreat, Burlesque); the worst have tried, and failed miserably, to turn her into some kind of a JV Meg Ryan (When in Rome, You Again). In the years since the dullards at the CW cancelled Mars, her most interesting work has been in her two dozen (yes, really) appearances on The Late Show with Craig Ferguson, where she's become that host's equivalent to Teri Garr on the old Letterman show: a favorite guest, a terrific foil, and a natural comedienne.

Hit and Run, for all its faults, comes as close as any movie has to bottling that particular quality that she has on Ferguson, of capturing her wit and charm and putting it to good use. Shepard, who wrote, co-directed, and co-starred, is probably the guy to do it--he's her fiancé, and it's something of a surprise to discover that (unlike other unfortunate instances of real-life lovers working opposite each other onscreen) their chemistry and ease with each other makes it into the frame fully intact. Their best scenes have a casual, off-the-cuff quality, a playfulness in their little jokes and affectionate way of calling each other "buddy," the subtle overlaps capturing the feel of conversations overheard.

The plot is old hat. Shepard plays Charlie, a likable goof-off who lives in a remote California town. He's in witness protection (Tom Arnold, mustering all of his sweaty, manic energy, is the marshal in charge of him), after testifying against the bank robbing buddies he drove getaway for. Bell is Annie, his live-in girlfriend, a teacher at a local community college who gets a dynamite opportunity to go head up a program in Los Angeles. But that city's trouble for Charlie: it's where his old crew (played by Bradley Cooper, Ryan Hansen, and Joy Bryant) dwell, free and clear in spite of his testimony. When they find out he's on his way back, they come after him, and that's pretty much the movie.

The storyline, and Charlie's former profession, means that there are car chases--a lot of car chases, and you will probably grow tired of them before the filmmakers do. They're fun enough, early on, but the first big multi-vehicle pursuit is a weirdly nonsensical set piece in some kind of obstacle course at an abandoned airport; it looks less like a car chase and more like a car commercial. But Shepard and Palmer (who previously co-directed Brother's Justice) stage the action scenes credibly, in a fast, high-energy style (even if some of the filmmaking, like the shot matching in Bell's tearier scenes, is sloppy). It's mostly a question of discipline, as if, having gone to the trouble of staging all these action beats, they couldn't bear to trim them down. And that goes double for the odd end credit sequence, which tacks on an unsuccessful and unnecessary scene with Sean Hayes, seemingly because they felt bad that he showed up and they couldn't work it in anywhere.

Then again, that kind of nice-guy chumminess is part of the movie's charm. Much of the cast is comprised of friends and previous collaborators: aside from the real-life couple at its center, Cooper and Shepard are best buddies, Bryan co-stars with Shepard on Parenthood, and Hansen co-starred on Mars. Audiences may come to see them chase each other around, but Hit and Run is at its best when it goes on pause for funny dialogue detours, like Bell's smirky inquisitiveness about the kind of guy who likes Shepard's car, or Shepard's fascination with Cooper's jailhouse sodomy. Let's be clear: much of the movie simply does not work, and a lot of it is utterly ridiculous. But they're trying things here, throwing some curveballs, and going for broke with an enthusiasm that is very difficult to keep from surrendering to.