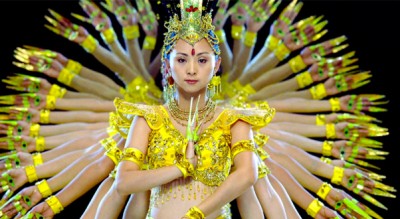 In the opening sequence of Ron Fricke's Samsara, we watch a performance by three young dancers. At the end of their dance, Fricke closes in on one of their faces, and holds the shot, and holds it longer, in a tight close-up. It's a fascinating little moment, a conscious effort to make us, as audience members, hyper-aware of the act of really looking at something. You'll be doing a lot of that at Samsara, which is Fricke and producer Mark Magidson's long-awaited follow-up to their gorgeous 1992 film Baraka. Like its predecessor (and Koyaanisqatsi, for which he was cinematographer), Samsara is not a standard documentary: there are no talking heads, no voice-overs, and no explicitly stated themes. Fricke tells his stories in breathtaking images and stirring music, and they encompass nothing less than the entirety of the human experience.

Fricke shot his film over the course of five years in 25 countries, shooting on 65mm film. The images, as usual, are astonishing, capturing the peculiar beauty of landscapes, villages, skylines, factories, and all matters of visual interest in between. There are certain signature images, familiar from Baraka and its contemporaries: sped-up cityscapes, the traffic flow of packed subway stations, the movements of busy-bee factories.

But none of it is formula, nor is it random. Small stories are told in shot or a sequence, like the tenderness between a tattooed tough and his tiny daughter, or a montage of babies and toddlers being baptized. The film plays out in musical movements, in which certain themes slowly emerge and identify themselves: we go, as an example, from pictures of mass production to mass consumption to forced reduction, by traveling from a meat factory to a wholesale club to a fast food restaurant to a plastic surgeon's office. In a sequence like that, the juxtapositions are funny; elsewhere, they can be uncomfortable. Some of the compositions have a remarkable visual wit (a shot of two burka-clad women standing near a provocative ad for men's underwear), others are surreal and bizarre (a man sitting next to what appears to be his roboticized twin, a funeral procession for a man buried in a gun-shaped coffin). Some are inspiring, others depressing; some reveal themselves gradually, as when we suddenly recognize the devastation of Katrina, or that we're looking at figures not in a doll factory, but a sex doll factory.

The mind tends to wander a bit during the film, an action that this moviegoer usually feels a kind of reflexive guilt over, but which seems part of the point here; according to the film's own site, it "takes the form of a nonverbal, guided meditation." That sounds about right. Without narration or narrative to focus on, your attention may meander, allowing certain sights and visual motifs to inspire further thought, detours, digressions. It's not a big deal--we will eventually circle back, drawn back in by a startling shot, or a particularly powerful edit timed to the blazing score.

There are ways to read a text in Samsara, certainly, to follow and connect it as pieces of a grand narrative (even one about something as massive as life and/or death). There is even a inclination, in the mind of a critical moviegoer, to draw out that text--and that's fine. But there's no obligation to do so, because the film can also be injected and enjoyed as pure aesthetics, an object of cinema art. It may go on a bit too long, passing by a couple of stronger closing images than the one that Fricke eventually chooses, and a few of its beats are more inexplicable than successful. But it's a unique and beautiful film, and generates genuine awe in a moviegoing season where that quality is all too rare.