Life and Times of Grizzly Adams: Season One, The

Classic Shick Sunn Classic Pictures nonsense: remarkably shoddy, completely unbelievable...and eventually quite enjoyable. CBS DVD and Timeless Media Group have released The Life and Times of Grizzly Adams: Season One, a four-disc, 13-episode collection of the briefly popular 1977 NBC family adventure series' first half season. Starring Dan Haggerty, Denver Pyle, Don Shanks, and Bozo the grizzly bear as Ben, The Life and Times of Grizzly Adams should bring back fond memories for kids who grew up on all those frantically-hawked Sunn Classic big-screen epics from the 70s like In Search of Noah's Ark and Beyond and Back, while families looking for some kid-friendly, innocuous adventure fare could do far worse. No extras for these problematic transfers. 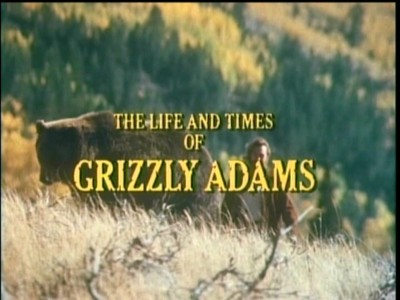 Somewhere in the Rocky Mountains, sometime between 1850 and 1853 (a character states in one episode that the current U.S. President is Millard Fillmore). Farmer James Adams (Dan Haggerty), falsely accused of murder, has fled up into the beautiful but unforgiving mountains where he intends to stay, forever away from civilization. Initially a tenderfoot when it comes to surviving in the treacherous mountains, Adams discovers that his mysterious, natural rapport with the various mountain and valley fauna have saved his life; he watched what the unafraid animals ate, and he ate that, too. He soon receives broader instruction in how to live off the land first by grave, kindly Indian brave Nakoma (Don Shanks), and then by cantankerous old trapper Mad Jack (Denver Pyle), who helps Adams build a cabin. Adams' constant companion, however, is Benjamin Franklin (Bozo the bear), a tame grizzly bear that Adams rescued off a cliff ledge when Ben was just a little cub. The two now share a remarkable psychic bond (including, apparently, Ben's ability to understand the complexities and subtleties of human speech), with Ben frequently aiding "Grizzly" Adams with his efforts to rescue the various strays―both human and animal―that cross Adams' path in his secluded, pristine New Eden. 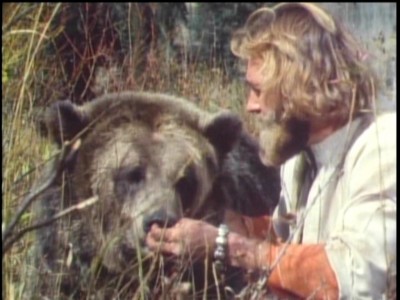 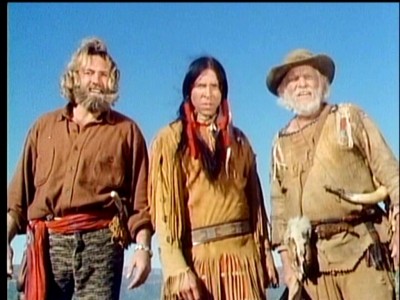 I've written many times before about the joys of growing up during the 1970s' golden age of whacky pseudo-science/pseudo-history, when the nation's pop culture was saturated with B movies and sketchy documentaries and pulp books and magazines and TV shows and toys dealing with UFOs, Bigfoot, the Bermuda Triangle, crystal power, ESP, and ancient astronauts (to list just a few). Certainly in my memories Shick Sunn Classic Pictures was one of the central drivers for all that giddy, hysterical fun, during a time of my adolescence when anything supernatural seemed not only possible but completely plausible...depending, of course, on the marketing skills of whatever company was flogging a product connected with that particular phenomenon. And nobody beat Shick Sunn Classics at marketing and promoting "must-see" family-friendly exploitation entertainment. Based out of Salt Lake City, Utah, indie Shick Sunn Classic Pictures compensated for their relative inexperience in actual moviemaking by taking a full-court press approach to pre-production marketing research (to determine target audience and choice of subject matter), followed by strictly-controlled, low, low-budget production costs, and then smacked home for maximized profits by "four-walled" releasing schemes (renting the movie theatres outright for 100% of the ticket sales), hyped by ballyhoo-worthy saturation promotion on television, radio and print ads. With an almost foolproof, low-risk method of producing and/or releasing movies that were in essence "pre-sold" to a waiting public, Shick Sunn Classic Pictures released one insanely profitable family adventure/documentary/drama after another: When the Wind Blows, The Outer Space Connection, The Adventures of Frontier Freemont, The Amazing World of Psychic Phenomena, The Mysterious Monsters, In Search of Noah's Ark, The Lincoln Conspiracy, Beyond and Back, The Bermuda Triangle, In Search of Historic Jesus, Beyond Death's Door, Hangar 18, and of course the 1974 theatrical version of The Life and Times of Grizzly Adams (which by various accounts pulled in somewhere between 25 to 35 million dollars in ticket sales―most going directly into Sunn Classic's pockets―on a paltry half-a-million dollar investment). I saw them all, and absolutely loved them (the day someone puts out a boxed set with widescreen transfers is the day I drop dead from the vapors). 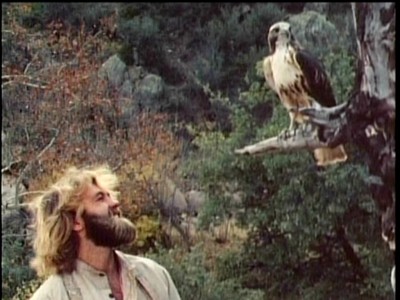 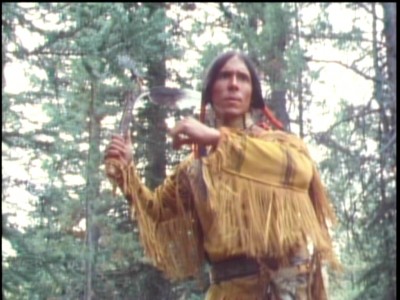 With the kind of profit margin success that the mainstream studios could only dream of, it was inevitable that savvy, chintzy Shick Sunn Classic Pictures would be approached to produce for television, with their most famous effort being 1977's The Life and Times of Grizzly Adams series. According to what I've read, NBC approached Sunn when a televised airing in 1976 of the same-named 1974 movie won a sizeable chunk of the night's demographics. Third-placed NBC, with nothing to lose, signed up Sunn's one-man-band producer Charles Edward Sellier, Jr. to gather the movie's cast together for a 13-episode mid-season replacement tryout in February, 1977 (in addition to producing the original movie, Sellier also wrote the highly-fictionalized 1972 novel from which the movie was adapted). 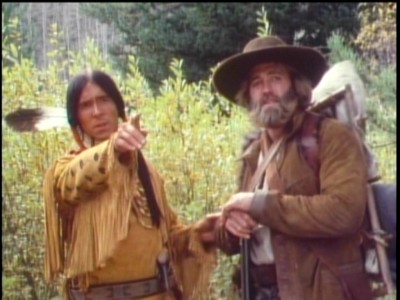 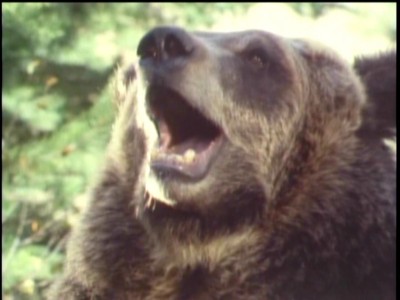 True to most biopics for the big and small screen, The Life and Times of Grizzly Adams has almost nothing to do with the real-life Adams...but when has that ever been a prerequisite for an entertaining biography? Fully cognizant of the culture's zeitgeist at that moment, the producers of The Life and Times of Grizzly Adams took the real-life animal killer James "Grizzly" Adams and turned him into a beatific post-hippie, pre-New Age Father Earth poohbah who wants to wrap his arms around the whole world and love it to death. Spouting amusing homilies like, "If you live with nature, not against her, she'll treat you real good," (that is, if disinterested "nature" doesn't decide to up and kill you off in any number of grisly fashions), this Grizzly Adams for the Earth Shoe®-wearing, Grape Nuts®-crunching, macraméing-stitching mid-70s despises money (watch his eyes tear up with friend Mad Jack finds gold), despises anyone coming too close to his Eden (a visiting Indian maid sets him straight on what a hypocrite he is...but he forgets this lesson in the next episode), and fanatically wishes no harm to come to any of his animals in his valley and on his mountain. 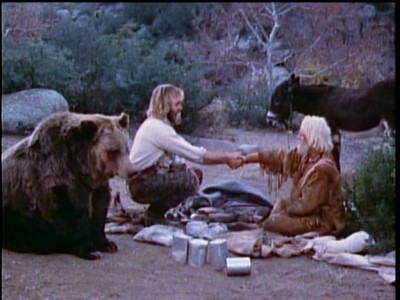 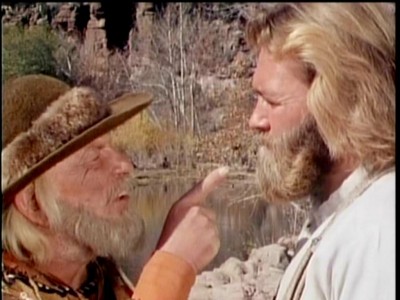 Of course the producers and writers of The Life and Times of Grizzly Adams never really challenge Griz and hiz possessive feelings, keeping the show's weekly lessons in conservation, tolerance, and non-violence superficially "feel good" for all the kiddies out there (I wonder how Nakoma's fellow Indians feel about Griz taking over their mountain and valley, before arbitrarily setting aside most of their food source as verboten?). Glossy simplification is key here: no one dies; no one gets maimed; no one even gets fleas or lice (gosh his teeth are white, with all those nice fillings, too). And with that simplification comes the worst (and therefore most hilarious) kind of anthropomorphizing in the show's main relationship: Grizzly and his animals. As that keening, warbling John Denver sound-alike cries prettily about living in harmony and majesty in the background (shut........up), Grizzly Adams keeps up a running conversation with Ben and all the other forest creatures that would seem to indicate, as Mad Jack rightly speculates time and again, that Grizzly's a bit teeched in the head. The directors never fail to include several shots in each scene of Ben the grizzly nodding and growling in agreement with Adams' ramblings, while higher forms of communication are regularly employed between the two (smarter than Lassie, Ben can apparently understand complex commands to go find strangers and report back, as well as turn fish on a rotisserie, and pray before his supper, displaying a preternatural calm that belays his own natural impulse to use Adams as a scratching post). 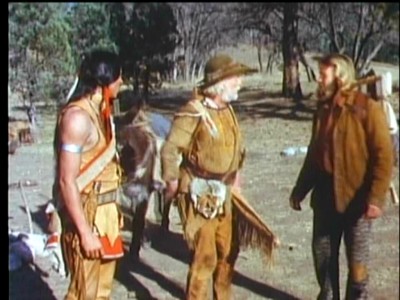 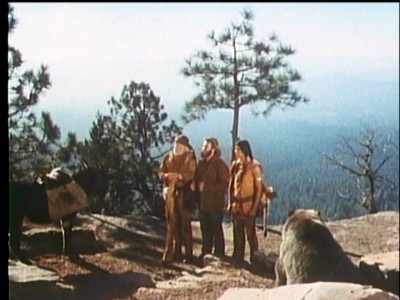 We're constantly told that Adams has a "special relationship" with the forest animals, with the evidence given that if you just speak to a wild, bloodthirsty animal in a firm tone as Grizzly does, letting the savage creature know you mean him no harm, the two of you will reach a mutually beneficial understanding that includes him not ripping off your face. In one episode, Grizzly frees a trapped wolf―a wolf, mind you―who appreciatively rolls on his back for a cute yelp and a belly scratch. In another (Unwelcome Visitor), a hawk tells Adams where in the forest an injured boy is lying...instead of perching gently on the lad's forehead and plucking out his eyeballs, one by one. The height of Grizzly Adams silliness comes, though, with Beaver Dam, where Griz and Ben sadly contemplate packing their belongings and leaving their valley after, um...having politely asked a group of beavers he relocated to relocate again out of his valley: "It wouldn't be neighborly to kick them out," he glumly asserts, after they initially refuse. After giving the beavers the night to think over their decision (I'm not making that up), Mad Jack rightly says, "That boy needs looking after," (the sight of massive Haggerty, a pleasantly untrained actor, earnestly imploring the beavers to leave, is a classic moment of TV insanity). 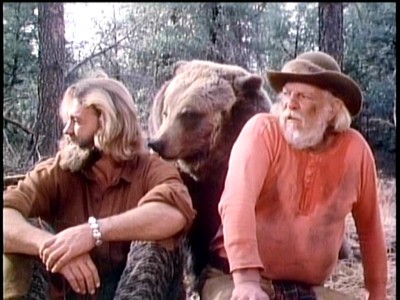 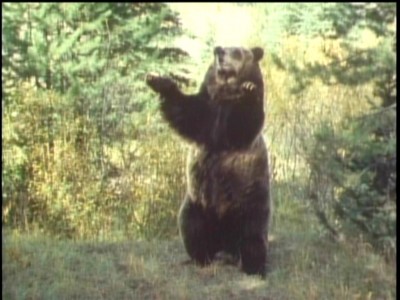 All of that makes The Life and Times of Grizzly Adams easy to laugh at, certainly...but at its core it's a genuinely sweet show (if not calculating and insincere), and truly innocuous, in the best sense of the word. Employing the crudest forms of melodrama (crying, lost children being chased by animals, crying, lost adults being chased by animals), The Life and Times of Grizzly Adams is primitive storytelling, to be sure, amplified by the almost laughably inept nature of the production: mismatched stock footage shots from other Sunn Classic epics, poor framing, incomprehensible editing, indifferent thesping (although veteran Pyle is always amusing when he's pissing and moaning about something), and production values reminiscent of a junior high schooler's Super 8mm film project. In other words, it recreates the big-screen feel of a typical Schick Sunn Classic Pictures movie exactly...and that's all I needed to enjoy The Life and Times of Grizzly Adams all over again. Adams' Ark is a good example of the formula, with Griz and Allan Pinkerton, of all people, racing to a volcano (...yep...) to save assorted birds, squirrels, and fawns from the inferno, and almost getting roasted themselves. Filmed on the cheap cheap, with ridiculous special effects and chaotic editing, Adams' Ark is so humorously inept that you wind up finding it endearing as hell―which can pretty much sum up the entire Shick Sunn Classic Pictures oeuvre...and The Life and Times of Grizzly Adams, as well. 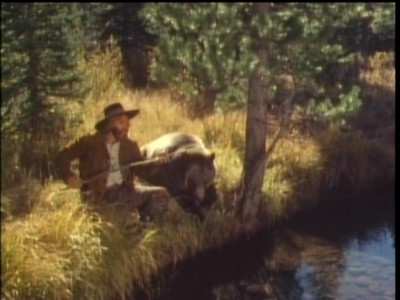 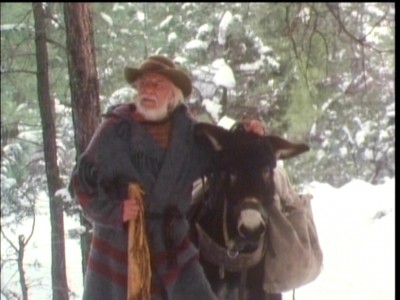 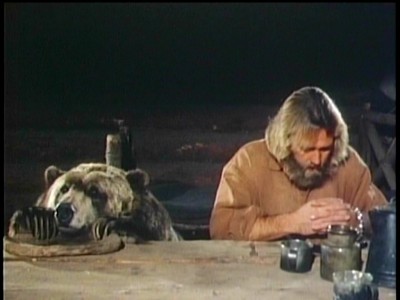 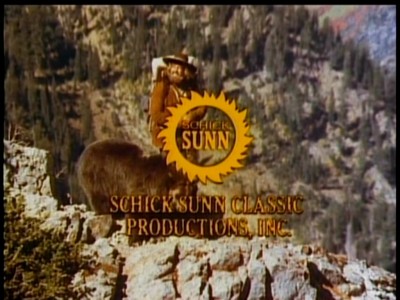 The Video:
Not good at all. The full-screen, 1.33:1 video transfers for The Life and Times of Grizzly Adams: Season One look to be syndication dupes (they have old Viacom tags) that aren't much better looking than second generation VHS tapes (run times vary, too, from 44 to 46 minutes, generally). Muddy color that often shifts to pink, a soft, fuzzy image, and tons of debris and video noise make these transfers hard to take...unless you're nostalgic for how stuff looked 30 years ago (at least for this kind of old TV title, it somehow "fits").

The Audio:
The English mono audio track is a bit scratchy and hissy, but it's serviceable, with no subtitles or closed-captions available.

The Extras:
No extras for The Life and Times of Grizzly Adams: Season One.