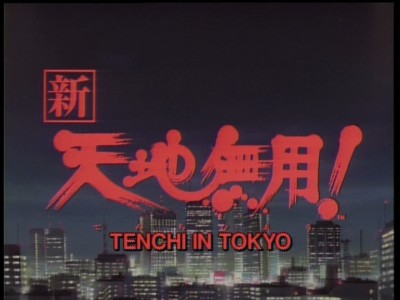 Tenchi in Tokyo is a bit of a departure for the Tenchi Muyo franchise. I am not only referring to the obvious (that Tenchi is now in Tokyo) but to the type of series this is and how it fits in with the rest of the Tenchi saga. Unlike Tenchi Muyo and Tenchi Universe, Tenchi in Tokyo uses a different basic storyline that seems to be set in another alt-universe of sorts. The series begins with the departure of Tenchi. Tenchi decided that he needed to move to Tokyo to learn more about becoming a kannusi, a traditional role which would help him better look after his own family shrine.

The news doesn’t go over well with most of the other characters, especially Ayeka and Ryoko, both of whom seem completely determined to not let Tenchi disappear from contact with them and things become a bit out of hand at various points in the show as a result. Tenchi insists on going. It seems as though Tenchi wants a new adventure.  In a way, the family of friends is no longer “whole” as one unit. Where will this new saga take things without all the characters we love being together the way it was in other Tenchi series? Will it all just be a big misstep that takes Tenchi away from the elements we loved about this franchise in the first place?

Those questions seem to be placed firmly at the forefront of a lot of negative reactions that have been directed towards this story over the years. Some fans loved getting to see a different story with an unusual spin that involved the characters in new and exciting ways. Other fans wanted something radically different altogether (which this really isn’t an entirely new approach to the Tenchi style) and others thought it strayed outside of the realm of acceptability in storytelling. Unfortunately, Tenchi in Tokyo is one saga that continues to divide fans. However, the series remains a popular and endearing title because after one looks past the comparisons, this is an entertaining and well-made show in its own way and it most certainly deserves its fans.

The thing about it is this: Tenchi in Tokyo mixes up the story in ways that is new and different in comparison to every other version of Tenchi that had been produced in the past.  Not all of these beloved characters get to have the same amount of screen time and a lot of things happen that don’t directly involve everyone on the show. That’s just how things flow as a story with this particular vision. 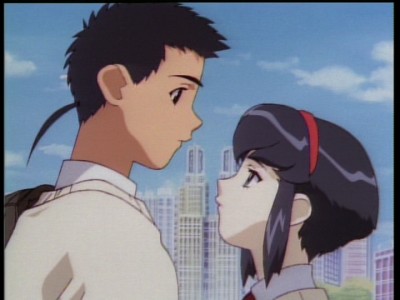 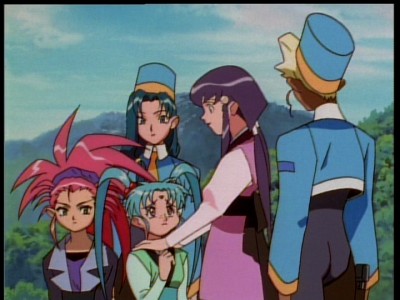 This story is also slower in pace and things take a lot longer to unfold plot-wise than in other Tenchi stories. There is a lot going on in this story when it comes down to looking into the character of Tenchi and his relationships with others. A new character, Sakuya Kumashiro, decides to take an interest in Tenchi and a potentially romantic relationship begins to brew. However, there is a lot to her story that Tenchi doesn’t realize when he first meets here. It eventually becomes a major element of this series, as Tenchi begins to learn about Sakura. Meanwhile, there is also a mysterious girl in the sky named Yugi who has a grudge with Tenchi’s family. There’s something sinister brewing as she attempts to destroy Tenchi.

I strongly feel that this series is something that works as a bit of an alt-universe telling once again. It’s odd in a way… it works essentially as a sequel to what came before it but it also changes enough elements so that it can be viewed as a separate entity altogether. Most main characters in the Tenchi canon have slightly different backgrounds here, but it all lends to a reasonably new experience that will keep fans interested in the material. It’s a bit of fun to see and compare ways in which our favorite characters have been altered from other story versions.

The animation might take a while to get used to. The character designs are essentially the same, but the art style is a bit less refined that previous incarnations. It’s perhaps the most different in terms of following a similar animation pattern as a Tenchi series. Some will love the style as it can sometimes feel more realistic and less fantastical. Others will shrug it off as being “cheap” animation (but it really doesn’t look that way). It might just be a bit jarring at first as one can recognize that the animators didn’t want to stray too far from the origins of this series while simultaneously attempting to alter what fans loved about the animation in the first place.

Tenchi in Tokyo might not be the most respected Tenchi outing, but it has more than enough creativity and originality to keep viewers interested in seeing where the story will go. It also ended on a decidedly high note that wrapped up the series in a way that was intriguing and satisfactory. I enjoyed the show and would recommend it any Tenchi fan as a fun anime diversion.  Just don’t expect to find a series that is on par with the original or Universe. 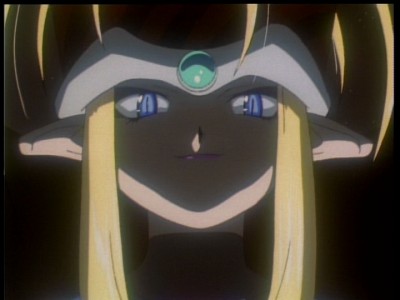 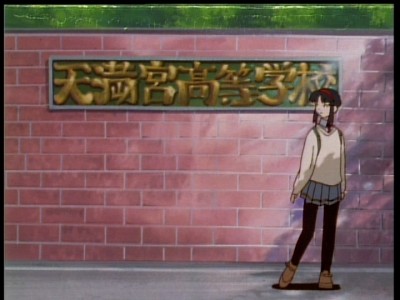 Tenchi in Tokyo has one of the most disappointing video presentations that I have seen in a long time. The transfers are presented in the original broadcast aspect ratio of 1.33.1 full frame. The entirely positive aspect of the video presentation ends there. This series is presented with some massively dated transfers that have clearly not undergone any significant changes. These aren’t improved transfers from previous releases of the show. That might not sound bad, but it really, really is… these transfers were created over a decade ago. It was the late 90’s when Tenchi in Tokyo had its DVD debut. Here we are in the 2000’s (a new millennium) and the transfers for Tenchi in Toyko remain unaltered. I don’t even believe this to be a new encode. The same old faults with compression are still present here. The image is still just as soft.

I wasn’t necessarily expecting anything new for this release from Funimation, but I can’t say that I am pleased either. Who wants to watch any anime series with dated compression issues (which are much more noticeable on today’s new and significantly larger HDTV’s) or without any significant clean-up? I don’t like film prints with scratches and dirt. Some of those disappointing aspects are found on this DVD release. Colors are also flat and more muted than I would have hoped for in revisiting this series on DVD.

The audio is unremarkable. It’s a flat and uninvolving 2.0 mix in either English or Japanese. The presentation is partly a result of the age of the production alone, but I think the show could have sounded better if a new mix had been created. However, it gets the job done. Audio is clean and dialogue is easy to understand.  This won’t amaze anyone but it’s a decent enough presentation audio-wise.

The only supplements included on this release are clean opening/ending themes and trailers for other DVD releases from Funimation Entertainment. 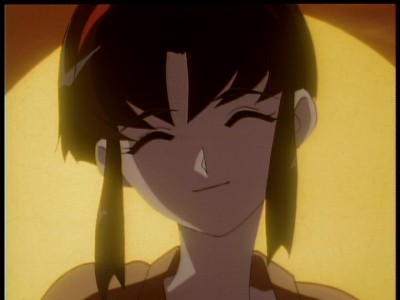 If you never owned a past version of Tenchi in Tokyo, you will be getting essentially the same transfers as previous DVD releases, and you may want to purchase the set based on having a good Tenchi series alone. It's a nice addition to the Tenchi canon and an underrated and under-seen Tenchi saga that fans of these characters will enjoy experiencing and owning on DVD.

However, if you already own past DVDs this release offers no reason to upgrade. I wish I had better news to bring, but that’s essentially where this set stands. The PQ might have been fine with me a decade ago but it bothers me now that technology has taken many innovative steps forward. This set could have at least benefited from entirely new encodings if not a complete restoration effort.

I still wonder if it would have been cost prohibitive given the fact that this particular series isn’t as popular as other Tenchi outings. It’s disappointing (to be sure) but it might not entirely rule out a worthwhile purchase for newcomers who don’t own this show. For that audience, this is still a decent DVD release from Funimation and it is one that is worth considering purchasing with the right low-cost price-tag.