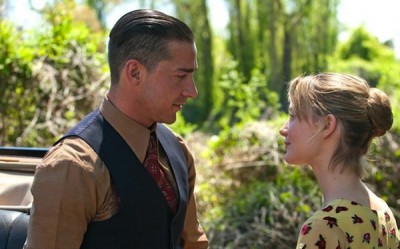 Musician-turned-screenwriter Nick Cave and director John Hillcoat last teamed for The Proposition, a brutally effective bit of business set in the Australian outback in the 1880s. That picture had the feel of myths being simultaneously made and undercut, and their latest collaboration, Lawless, has much of the same aim: set in Franklin County, Virginia ("the wettest county in the world") during the Prohibition, it is ripe with gangster-picture iconography. But it melds those images and themes with leftover artifacts of the Western (domestic and Spaghetti) to create a bubbling stew of badassery and violence. It's one of the more entertaining films of the summer.

Cave's script tells the true story of the Bondurant family, three moonshining brothers trying to make a living. Forrest (Tom Hardy) is the de facto leader, a seemingly indestructible bear of a man with a philosophical side. Howard (Jason Clarke) is the muscle; youngest brother and driver Jack (Shia LaBeouf) is the meekest of the bunch, the constant target of their jeers for his lack of "grit," though he fancies himself a grand thinker in the mold of notorious big-city gangster Floyd Banner (Gary Oldman).

Oldman makes his first appearance in a resplendent pinstripe suit, in the front seat of a shiny automobile; he leaps out to squeeze the trigger of his tommy gun, a stub of a cigarette pursed in his lips. In other words, Cave has written him an archetype, and he has a blast playing it--ditto Guy Pearce, as the slick, bow-tied, loathsome and corrupt city deputy who arrives in Franklin County not to dry it out, but to collect a handsome percentage and look the other way. The Bondurant boys are the only ones who refuse, and the trouble starts there.

If Pearce and Oldman's characters are variations on familiar types, Hardy's Forrest is something new; he's a brute, but a quiet one, wandering his general store in long cardigans, his dialogue a series of guttural grunts and epigrams ("It's not the violence that sets a man apart, it's the distance that he's prepared to go") delivered in a seductive, dangerous drawl. It seems appropriate for Hardy and Oldman to appear in the same film--if, unfortunately, they share no scenes--since the chameleonic body of work the younger actor is putting together so strongly resembles his co-star's; I'd imagine wide swaths of the audience will not realize this is the same actor from The Dark Knight Rises, or Inception, or Tinker Tailor Soldier Spy. It's a masterful performance, endlessly enjoyable, the kind of distinctive work where we find ourselves giggling with pleasure even at throwaway lines, like the folksy "all right now" he tosses off after administering an especially bloody beating.

There are plenty of those to be had here--be advised that the violence is hard, mean, fast, and nasty. Much of it is directed at poor LaBeouf, which should please his detractors (and they are legion), but Hillcoat's done something very interesting with his casting: he rather ingeniously plays off the notion that his young star is out of his element, and uses it to the narrative's advantage. LaBeouf is playing a disrespected, underestimated youngster, and his process of taking control of the picture and earning our respect (which he does) nicely mirrors that of his character, who goes from playing-acting outlaw to being one.

This viewer couldn't summon up much interest in the romantic subplots between Hardy and Jessica Chastain or LaBeouf and Mia Wasikowska, which are mostly just marking time and creating easy "danger" beats. And as much fun as Oldman is to watch, in retrospect, his character doesn't seem terribly necessary to much of anything that goes on. But these are minor complaints. Lawless is loosely funny, drippingly atmospheric, and utterly savage--in other words, it's a helluva good time.