Silent film star Asta Nielsen (1881-1972) was an elegant, athletic, charismatic woman with striking dark looks that to my modern eyes seem like part Vampira, part tragic singer Karen Carpenter. Not quite the vamp and too old to be the ingénue, her vast body of work is generally forgotten except perhaps for G. W. Pabst's 1925 melodrama The Joyless Street - and even that is better known as the film that shot fellow Scandinavian Greta Garbo into stardom. That development might lead some to believe that Nielsen's craft is best left for navel-gazing movie bloggers to analyze, but she was actually quite a modern, expressive performer with a unique, sexy appeal all her own.

Danish by birth, a mediocre stage actress turned brilliant film headliner, Nielsen was notable as one of the first movie stars - period. Her success in the 1910s made her well-known all across Europe, an unusual occurrence at a time when most film actors received little to no onscreen credit. Nearing the age of thirty by the time she started acting on film, Nielsen's maturity and more naturalistic performing style must have touched a nerve with audiences of the day. Another factor in her popularity was her impressive versatility, which is on full display in the German 2-DVD set Four Films with Asta Nielsen. The films contained in this nicely presented set showcase Nielsen's knack for florid melodrama (The Queen of the Stock Exchange), zany slapstick (The ABCs of Love), cross-cultural comedy (The Eskimo Baby), and nail-biting suspense (The Suffragette).

Four Films with Asta Nielsen consists of the following films, all produced by Germany's Internationale Film-Vertriebs-Gesellschaft in 1913-16:

Die Suffragette (The Suffragette) (1913; 61 minutes)
The Suffragette's torrid story concerns Asta's character Nelly Panburne, a demure child of privilege turned radical feminist. At the beginning, she's a quiet girl who enjoys reading at the family's country estate with only an elegant Russian wolfhound for company. Her more politically inclined mother has other plans for her, however, persuading Nelly to join the Suffragette movement. As a strident crusader for Women's Rights, Nelly leads the other suffragettes into a public disturbance which lands her in jail. The main target of the suffragettes' ire is Lord William Ascue (Max Landa), a local politician who wants to quell the suffragette movement by arresting all the women involved. After Lord William's ex-mistress shows Nelly a stack of incriminating letters, Nelly and her mother come up with the idea of placing a bomb inside the Lord's mansion. Minutes before the bomb is set to explode, however, Nelly realizes that Lord William is the same man that she had a brief romance with years earlier. Rushing back to the man's manor (where an important political gathering is in progress), the tension builds as Nelly tries to stop a catastrophe from happening.

Despite The Suffragette's strangely backward-looking conclusion (long story short: the suffragettes do not emerge victorious), it's actually a pleasant, efficiently paced drama with a diverting performance from Nielsen. Her natural acting style makes Nelly's transition from naive but outgoing girl to militant feminist believable. Unlike many films from the early silent era, it's not very stagy or dull. In fact, Nelly's anxious rush to save Lord William counts as the highlight of this set. 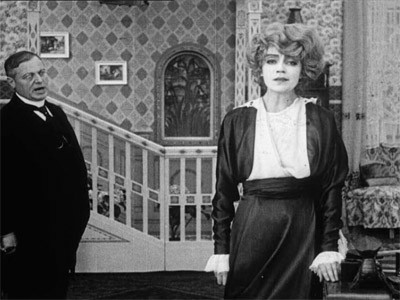 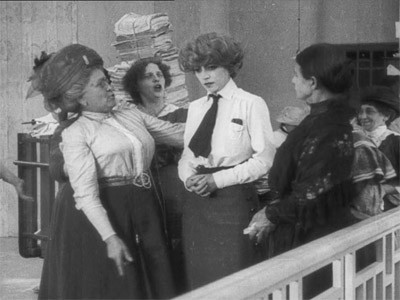 Das Liebes-ABC (The ABCs of Love) (1916; 50 minutes)
The opening scene of The ABCs of Love, a gender-tweaking comedy of misunderstandings, tells us we're in for a different Asta Nielsen. Where she was feminine in The Suffragette with a pile of Gibson Girl hair and up-to-date wardrobe, Asta sports a more severe look here as an immature country girl named Lis who is betrothed to a boy that she hasn't yet met. As Lis' father (Magnus Stifter) introduces Lis to the handsome, straight-laced Philip (Ludwig Trautmann), Lis frets that he's not sophisticated enough for her. They engage in a little reverse-role playing so that Lis can teach Philip how to be a real man. This includes sneaking off to Paris with Lis in drag (because only men know how to enjoy the real Paris, apparently). When Lis' father unexpectedly drops in on them, Lis is forced to continue the cross-dressing charade by posing as Philip's best buddy. Dad catches on eventually, however, retaliating by teaming up with Philip and staging an elaborate prank on poor Lis. The only conclusion that the exasperated Lis can muster? "It's tough being a real man!"

A thoroughly average slapstick farce, The ABCs of Love nevertheless holds a lot of fascination due to the cross-dressing angle and Nielsen's unrestrained approach to it. Even when the story becomes poky and unbelievable, the total commitment that Nielsen brings to this silly throwaway (with an outdated message, natch) makes it worth a peek for fans of this über-versatile leading lady. 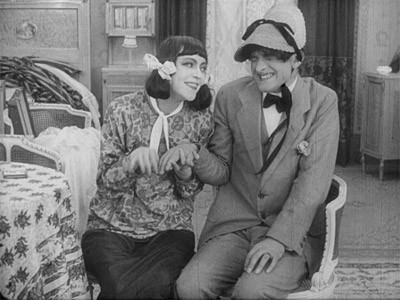 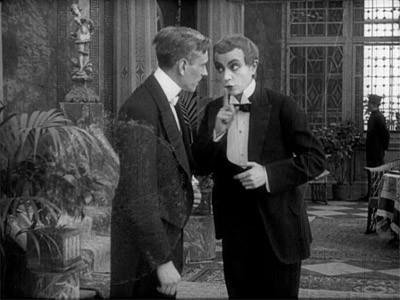 Das Eskimobaby (The Eskimo Baby) (1916, 70 minutes)
Like The ABCs Of Love, The Eskimo Baby is another wacky comedy whose main virtue lies in Nielsen's wild performance. This time, she plays Ivigtut, a native woman from Greenland who is brought to present-day Germany as the "souvenir" of a young scientist-explorer, Knud (Freddy Wingardh). Ivigtut's presence is puzzling to Knud's family, who graciously house her in their mansion but can't get used to her odd dress and behavior. Ordinary objects like mirrors and beds are a complete mystery to her. When it becomes apparent that Knud has a romantic interest in Ivigtut, it causes a crisis in the family since Knud had already been engaged to another woman. In the end, however, true love prevails.

Where to begin with The Eskimo Baby? This is one strange flick, hobbled with dated, condescending attitudes and a bizarre conclusion that can be boiled down to Babies Make Everything Better (The Suffragette comes to a similar conclusion, actually). There's one reason to watch it, however, and that is Asta Nielson's completely uninhibited take on the character of Ivigtut. Ivigtut is written as a completely naive, childlike being with no basis in real Native peoples. She's treated more like a space alien than anything else (even facial hair confounds her). It could have been a disaster, and yet Nielsen crafts her into an endearing figure who is utterly fascinating to watch. The film is enlivened with several genuinely hilarious moments, including a scene where Ivigtut wanders into a fancy department store and shoplifts random items. This sequence was filmed on location (in Berlin?) and has a wonderful spontaneous feel. 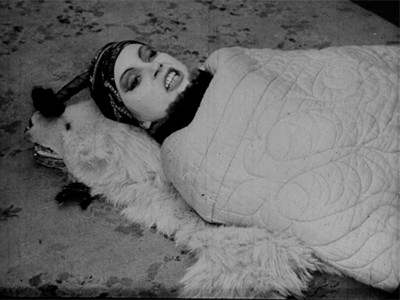 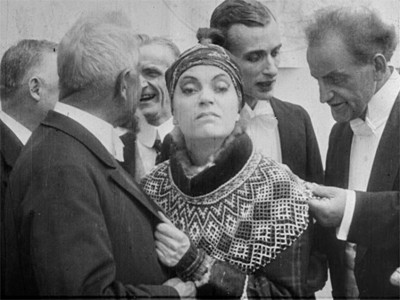 Die Börsenkönigin (The Queen of the Stock Exchange) (1916; 63 minutes)
Asta Nielsen makes a return to throbbing, lavishly mounted melodrama for The Queen of the Stock Exchange. Here she plays Helene Netzler, a well-to-do businesswoman who is the part-owner of a struggling copper mine in which she own a majority of stock. The mine's manager, Lindholm (Aruth Wartan), approaches her with news that he's located a new lode in the mine that is guaranteed to yield big results. She tours the mine (wearing mannish pants) and, in gratitude, makes Lindholm into a part-owner of the enterprise. After the initial success, however, Helene becomes distraught to find that Lindholm (whom she has fallen for) has become enchanted with Lina, the poor cousin that Helene is caring for. The price of success becomes clear when Helene decides to open up the mine for further drilling, however. Despite warnings from the mine's Chief Inspector (Willy Kaiser-Hyl) - who is also in love with Helene - the rush to yield more profits surges forward with tragic results.

The Queen of the Stock Exchange counts as a typically ripe melodrama of the era with a dense plot that's low on surprises. The fact that it was filmed at an actual mine with real miners as extras injects it with some of the realism that got sucked out via the fussy story and theatrical performances. Although Nielsen was renowned for her naturalistic acting style, here she's almost as stiff and unconvincing as her male counterparts. She does have the gravitas to pull off this more mature, intelligent character, however. This film appears more lavishly mounted than the others included here, with photography that is given a luster with tinted film stock.

Four Films with Asta Nielsen was produced by the German company Edition Filmmuseum with the same care and respect that you'd expect to find with U.S. releases by Kino and Criterion. For silent film fans, the set serves as a real treat to experience the many sides of this unjustly forgotten actress. 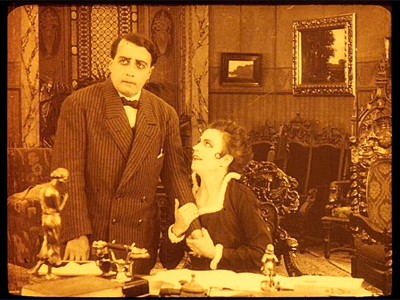 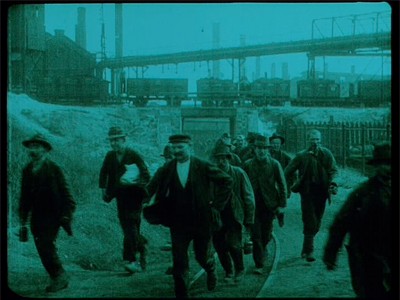 Edition Filmmuseum's Four Films with Asta Nielsen comes as a Region 0 PAL release which may not play in many American DVD players. It didn't work with my relatively new blu-ray player, but I was able to enjoy both discs on my iMac. The discs are housed in a standard-width transparent hinged DVD case which comes with a nice 12-page booklet containing photos and biographical info on Nielsen written in German, English and French.

These films were reconstructed with the best available materials, with missing segments reconstructed through surviving script excerpts or (as in The Suffragette) publicity photos. There are a few instances where the film is badly deteriorated, and dirt/specks are a constant presence. By and large, however, the picture is nicely mastered. The Queen of the Stock Exchange is presented with tints that replicate what would have been seen in the original print.

All four films in this set have the option of either viewing them in complete silence or with pleasant, period-appropriate piano scores from composer Maud Nelissen. The films' reconstructed intertitles are presented in German with optional subtitles in English, French, Spanish and Portuguese.

Edition Filmmuseum's Four Films with Asta Nielsen serves as a fine showcase for one of silent-era Europe's most talented actors. The tall, almond-eyed, somewhat gawky Nielsen might initially appear as an odd type to be a continent-spanning movie star, but her energetic skill with comedies and melodramas alike comes shining through in this set. Recommended.