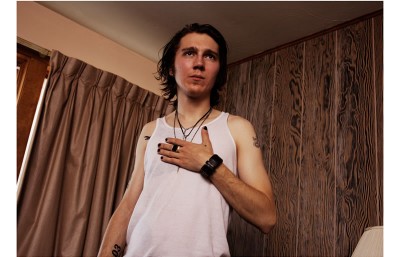 All right, Paul Dano, I'm coming around on you. If I may be so pretentious as to quote myself, this is an actor who whom I once wrote, "he's doing another of his sensitive, whiny mopes, a schtick that is growing more tiresome with every passing picture." And that's a criticism I stand by, while also acknowledging that he showed himself--in films like Little Miss Sunshine and There Will Be Blood--to be an actor not without talent. But he's been doing interesting work lately, shedding the repetitive persona and going some new and interesting places in films like Meek's Cutoff, Being Flynn, and Ruby Sparks. Which brings us to So Yong Kim's For Ellen, in which there is no shortage of Mr. Dano; he's in every scene, front and center, often alone. It's a very good performance, in a modest but admirable film.

He plays Joby Taylor, a rock musician who is on the wrong side of almost making it. The film finds him behind the wheel of his car, finishing a long drive to a dreary, snowy, and very grey (unnamed) small town. He's there to finalize the details of his divorce, and we can surmise from the brutally uncomfortable meeting with his wife and their lawyers that he hasn't exactly been a dynamite husband. Or father--he apparently has a daughter whom he's barely seen, and who he will lose all rights to in the divorce settlement. That last part gives him pause. So he tries to make some kind of contact with her: "Hang out, like, do stuff that a father and daughter do."

For Ellen is a character piece, so his vagueness is reflected in the picture's style; Kim's camera follows him around for a couple of days, adopting a casual, observational demeanor. Her screenplay is thankfully free of obvious exposition, though it is something of a task (a struggle, even) to piece together exactly what's happening and who everyone is, and we must wait longer than some viewers might prefer to find out how and why he's seen so little of Ellen, the offspring in question. From moment to moment, the film lives and breathes in the dialogue of everyday chit-chat, and the pauses between it.

And, of course, it rises and falls on the shoulders of Dano, who gives a loose and unstudied performance--quite the contrast to so much of his work to date. There's a freewheeling energy to his acting here, an unpredictability that's valuable, and he refuses to let his character's inner sadness define him (the trap that he has fallen into so many times before). He's a flawed protagonist, to be sure, but there's something endearing about seeing him try--in the throwaway moment where we see the list of "fun things to do with kids" that he's torn out of some magazine, or the pained but fascinated expression he wears while following Ellen's slooooow, methodical movements between toy store shelves. (Ellen is played by a very good, thankfully unaffected child actor named Shalyena Mandigo.) There's ease in their scenes, and a heartbreaking honesty as well, particularly when he asks her a very big question near the end, and she gives him the only possible answer.

That moment tees up a sense of inevitability that provides a perfect conclusion, which Kim inexplicably glides right past for the de rigueur "ambiguous" ending. That's kind of a dick move, cinematically speaking, and softens the picture's impact considerably. There are other stumbles along the way--Dano, for instance, has a scene at a dive bar jukebox that's a powerful bit of nonverbal acting, but the filmmaking is too self-conscious, pushing too hard to dictate our reaction by lingering on the quizzical/worried response of his companion (his lawyer, played by a nicely understated Jon Heder). The better scenes are those like the one that follows, in which the two men share an uncomfortable silence that Joby immediately worsens. He's not an easy guy to spend an hour and half with, but Dano and Kim make his flaws fascinating, and his pain relatable; For Ellen is a fine showcase for an increasingly interesting actor.