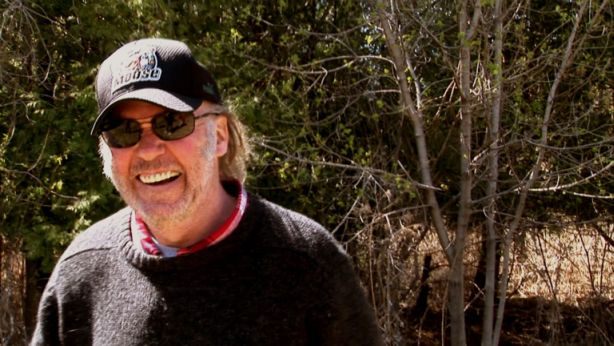 The "town in North Ontario" that Neil Young first sang of on the 1970 Crosby, Stills, Nash & Young song, "Helpless," is documented in Jonathan Demme's hybrid film, which combines footage of Young visiting Omemee, Ontario, in 2011, with film of a solo performance that Young gave at Toronto's Massey Hall. Demme has made a sideline of Young documentaries. This his third, following Neil Young: Heart of Gold (2005) and Neil Young: Trunk Show (2009). As with the others, the emphasis here is on Young's performance; only about 20 of the film's 88 minutes are spent outside of Massey Hall. What connects the movie's two portions is the past. Both Omemee and Massey Hall are places that loom large in Young's early life and career. He spent the first seven years of his life in sleepy little Omemee, and at Massey Hall, he performed two early solo concerts that became legendary - the recordings of which were only released in 2007 to predictable acclaim (Live at Massey Hall, 1971).

Journeys is a leisurely stroll through Young's past, complemented by contemporary performances that prove Shakey's still a passionate, riveting performer. In Omemee, we follow Young as he drives a 1956 Crown Victoria through the town, much of which he claims is now unrecognizable to him. We stop at a school named for his father, a sportswriter and novelist. We are taken to the site of the house he lived in as a kid, now a grassy field.

It's too bad that this footage is so limited. I would have enjoyed more "Travels with Neil." He's a drily funny, relaxed tour guide. He doesn't have a whole lot to say, but the experience is thoroughly enjoyable, aided by some very nice camera work by Declan Quinn.

Young's Massey Hall performance is outstanding. Young has always been a brilliant solo performer, managing to bring more energy, sound, and commitment to the stage than most full bands. Depending upon the song and the environment, Young is often more compelling alone than with Crazy Horse, although it's true that the band is without peer. The performances here are mostly new songs (from 2010's Le Noise), although a few older ones are present as well - notably, 1970's "Ohio" about the Kent State shootings of that year.

Journeys is nostalgic without ever feeling self-congratulatory. As a viewer (who did not grow up in north Ontario), the film was somehow more evocative of my own youth than it was merely a tribute to Neil Young. There's a universality to the approach that obviates the hagiographic danger of films like this.

Image and Sound
This brand-new, digitally-shot film looks flawless on Sony's Blu-ray. The 1.78:1 image is very solid all the way through, from the bright sunshine of Omemee to the darkened stage of Massey Hall. The 5.1 DTS MA track is natural and involving, and, as one might expect, the music is recorded particularly well. Young's own audiophiliac tendencies no doubt played a part in the manner in which his solo performances were captured (he is credited as an executive producer under his pseudonym).

Bonus Content
Three in-depth bonus features provide a wealth of context and background for the documentary. Two interview-style featurettes run over an hour: one at the Slamdance Film Festival with Demme and Young, an another at New York's 92nd Street Y with both the filmmaker and subject interviewed in front of a live audience. A shorter "making-of" featurette is less essential, but still worthwhile.

An easygoing film anchored by an outstanding live performance by Neil Young, Journeys is likely to endure as a lasting portrait of one of rock's greatest musicians as he enters the last stage of his career. Recommended.