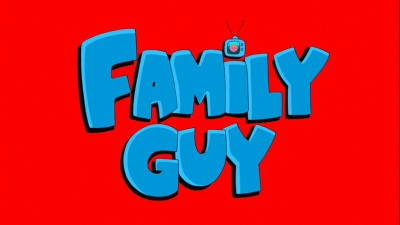 
The Story So Far...
Seth MacFarlane's "Family Guy" is the animated story of the Griffins, a suburban Rhode Island family. Peter is the standard stupid TV dad, while his hot wife Lois is the only thing holding the family together. Their kids, Chris and Meg, have the usual teenage problems, while their infant brother Stewie is attempting to take over the world. Of course, Brian, the family dog, views the whole thing with detached humor as he sips his martinis and lusts after Lois. The show has one of the most unique stories in TV history, as it was cancelled and then brought back thanks to overwhelming DVD sales and the help of frequent repeats on Cartoon Network.

This DVD set is the series' 16th home-video release. Eschewing traditional season sets for shorter "volume" releases, the first eight seasons have made it to DVD, while several one-disc releases collect special and un-aired episodes. DVDTalk has reviews of each release.

The Show
Stop me if you've heard this one before: this Family Guy set includes a "Road to..." Brian and Stewie adventure, a time-travel episode with Brian and Stewie, Lois dealing with the repercussions of Peter's stupidity and Brian getting his comeuppance for being pretentious. Stop? Yeah, if you're a Family Guy fan, you've definitely heard it before, and again before that. After volume nine saw the show rejuvenated with a few milestone episodes that saw the series try something new, it fell back on routine for the show's ninth season, and the result is a group of episodes that feels twice-backed, with little nuggets of joy here and there.

That doesn't mean the show can't pull out an interesting bit here and there. Though the "Road to..." concept has become as worn-out as the Treehouse of Horrors on The Simpsons, it's still obviously an episode that gets a supreme effort in terms of the animation and music, which results in a show that looks great and sounds better. The musical numbers are easily the best part of the series at this point, as tremendous songs like "Christmas is Killing Us," "All I Really Want for Christmas" and "Mr. Booze" could easily slot into a Broadway show. If MacFarlane never does another thing, his devotion to the art of the musical makes him worthy of all the praise he could get. 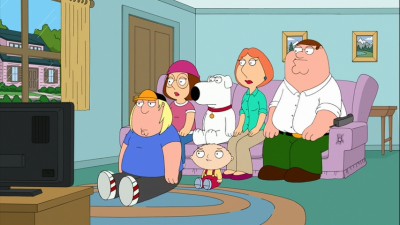 As with its jokes, the series has its standard fall-back targets, and it puts them in its sights again, be it the spiritual, who get assaulted in "Brian Writes a Bestseller," as the dog writes a quickie self-help guide, but can't defend it against Bill Maher's questions, pretty much any minority (just close your eyes and point and you'll find a joke about Asians) and Meg, the family's socially-awkward daughter, who not only tries to weasel her way into wheelchair-bound Joe's life, but hooks up with her brother. Nazis, a standard part of the show after so many years, get their moment to shine as well, as the neighborhood pedophile Herbert recognizes Chris' new friend as a war criminal, setting up an epic old-man fight, and perhaps one of the few times in history where you might find yourself rooting for a kid-toucher (unless you're a Polanski fan.)

Most of the time the series seems to be floating around in story elements, trying to work its way toward its next cutaway gag (including one overlong Michael J. Fox bit) or setting up another "Taking Our Sweet-Ass Time" joke, where a set-up becomes excruciating to the point where the wait is actually part of the punchline. Family Guy is a pioneer in this field, and this set is certainly rife with such bits. One of them may be the single longest of these, where Peter is reminiscing about 1985, and notes that it gave us the gayest music video ever, before showing nearly half of David Bowie and Mick Jagger's "Dancing in the Streets." As it plays, you start wondering when we'll get back to the show, before beginning to question if we're ever going back. And then you start questioning how the video ever came into existence. Then you ask, how did they get the rights to use it in the show this way? Then you kind of forget you're watching Family Guy. Then you kind of wish you were watching the video again. 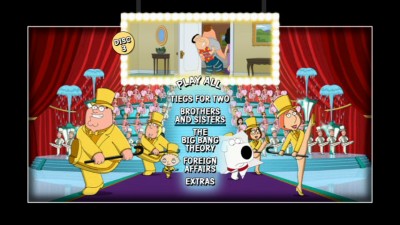 The DVDs
After including 13 episodes in the last release, they've added one more to this set's three DVDs. which come in a clear single-width keepcase with a dual-hubbed tray and wraparound cover, which is held in a cardboard slipcover. Each DVD has an animated, anamorphic widescreen main menu offering a play-all option, episode selections and the opportunity to check out any non-commentary extras.

After selecting an episode, a static episode menu appears, offering options to play the episode, select chapters, adjust languages and check out the special features. The menus are frustrating, because you have to navigate to the episode special-features menu to see if there is a track, and if there isn't, you have to back out two levels to choose another episode. On the second disc, where there's just one commentary, this is exceedingly aggrevating. The audio is presented in English Dolby Digital 5.1 and French and Spanish Dolby Digital 2.0 tracks, while subtitles are in English, Spanish, French and Portuguese.

The Quality
The first Family Guy collection delivered entirely in widescreen, this set looks pretty nice, with bright, vivid color and a clean image that shows off the impressive CG work peppered throughout, like the flyover of Quahog in "Halloween on Spooner Street" or Stewie and Bertram's Italian air battle in "The Big Bang Theory." There is some minor pixelation along thinner black outlines, and some occasional compression artifacts, but overall, it looks pretty good.

It's same as it ever was in terms of the sound, with Dolby Digital 5.1 tracks deliver crisp, distortion-free dialogue in the center channel, while the side and rear speakers take care of the sound effects and atmospheric elements and boost the show's many musical moments. There's a nice level of separation in the sound, with off-screen audio often set apart from the main sound, to give depth to the episodes.

The Extras
This time, we're up to six audio commentaries, which is a far cry from the days of every-episode commentaries, but slightly better than the previous release. Though the box indicates you get tracks from writers, directors, producers and cast members, that last part is a bit of an overstatement, as the only genuine cast memeber is Ron MacFarlane, Seth's dad, who was the narrator in the Christmas episode. Of course, his son is nowhere to be found, having abandoned the commentary booth some time back.

The commentaries offer up a great deal of info about the show's production, and serve as an intro in spots to the animation process, which is great for newcomers. The tone is loose and jokey, as the participants have a good time talking about their work. More or different tracks would have been appreciated though, as some mysteries go undiscussed thanks to the choice of episodes, which include most of the big episodes.

Commentaries may have edged up, but the number of deleted scenes is down once again, with just over 13 minutes of clips in all. None of it was very memorable, expect for one joke about a horse that I will admit I didn't even understand. The remainder of the found extras include a trio of selected scene animatics, including an animatic for the old-man fight from "German Guy". animatics for two scenes from "Trading Places" with non-optional commentary by Joseph Lee and an animatic for the final boxing scene in "Baby You Knock Me Out" with commentary by Julius Wu. There's also a 27-minute animatic of "The Big Bang Theory," with material that was cut before the animation was completed.

There's also a trio of featurettes, which are quite well-done, starting with "Herbert & Franz: The Making of an Epic Fight Scene," (10:15) which shows how the unique scene was conceived and developed, including the live-action fight footage shot for reference and some old-man interviews with the creatives behind it. It strikes the right balance between informative and entertaining. "The Road to the North Pole" gets a featurette of its own as well, the 13:44 "All I Want for Christmas," which mainly focuses on the effort on the episode's spotlight music numbers, and, in a nice change of pace, it includes Seth MacFarlane for once.

The final featurette isn't really about the series, but rather one of the actors, as it shows Adam West's Walk of Fame ceremony (28 minutes), when he got his Hollywood star. After watching two of these ceremonies recently, it's become clear that these events are rather awkward, in part due to the location on a busy street and also due to the incredibly commercial nature of the ceremony, as led by the Hollywood Chamber of Commerce. Fortunately, you do get West's outsized personality, as well as impressive tributes from voice actor/radio personality Ralph Garman and Seth MacFarlane, which makes for an enjoyable time honoring a fun actor. 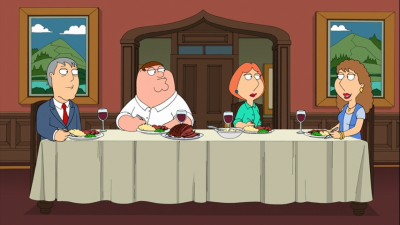 The Bottom Line
Considering how integral home video is to Family Guy existence as an ongoing series, it feels disappointing to see how the DVD releases have been increasingly less impressive. The shows are about as good as they've been in recent memory, hitting the same episode concepts and tried-and-true jokes, so it's become more familiar than funny, which fits right in there with the series' long-running substitution of recognition for comedy. There's still a decent amount of extra content, but this show doesn't hit on DVD the way it once did.