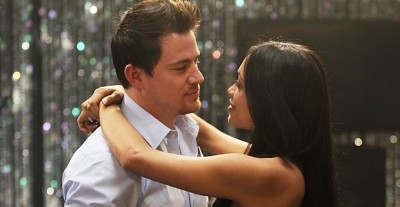 A kind of Altman in miniature, Linden's screenplay concerns a ten-year high school reunion at which old wounds are reopened, old secrets are told, relationships are reinvigorated, and new romance seems a possibility. At the center of the ensemble is Jake (Tatum, who also co-produced), who's got a good thing going with girlfriend Jess (played by Tatum's wife, Jenna Dewan-Tatum), but can't quite bring himself to pop the question. That may be due to his leftover feelings for high school sweetheart Mary (Dawson), who's not supposed to show up for the reunion, but does, of course, and with her husband (Livingston) to boot. His buddy Reeves (Isaac), meanwhile, returns as something of a prodigal son; he's a big rock star now, but he's there to seek out Elise (Mara), the quiet girl who he always had a thing for. Their friends Marty (Long) and AJ (Minghella) both show up with eyes for high school hottie Anna (Lynn Collins), who remains as elusive as ever. And the fifth member of the group of buddies, Cully (Pratt) is a married dad who gets a little too wrapped up in the rare opportunity to get hammered and make amends.

None of these are exactly garden-fresh characters, nor are the secondary ones in the periphery: the ladies' man (Mackie), the white guy who used to hang with the brothers (Geraghty), his surprised wife (Plaza), the patient and apologetic spouse of the alcoholic (Graynor). But Linden pretty much gives everyone a little moment to shine, some of them several, and he moves crisply between the short, efficient scenes. And he simply lucked out by pulling together such a stellar cast.

Tatum proves a solid anchor for the effort, his inherent charm providing some needed tension for the character's quiet struggle. Pratt is a gregarious counterpoint (and Graynor an excellent foil to him), acutely nailing both how this kind of guy can first seem the life of the party, but can quickly become tiresome and irritating (and how he doesn't seem to know the difference). Dawson is, as usual, so damn good that it's our loss she's not in basically every movie, and she has one reaction during her last scene with Tatum that's like a perfect piece of film acting. And Aubrey Plaza predictably manages to pretty much steal the whole thing.

The Isaac-Mara subplot may well be the most compelling, primarily because of the intensity of their chemistry--it's off the charts. It comes to a head with his performance of the big hit song we've all been hearing about, and that's where the picture pulls of a miracle: for once, we hear a fictional hit song that actually sounds like it could have been a real hit song. What's more, it does (in a modest way) what "Wise Up" did for Magnolia--it pulls the various narrative threads together smoothly, and gives Mara her best acting beat in the picture.

Any new film that invokes the specters of Altman and Magnolia is bound to suffer somewhat in comparison, and to be sure, 10 Years is something of a piffle--formulaic and fairly predictable, yes. But 10 Years is also almost unreasonably likable, and generates quite a bit of warmth and good cheer over the course of its easygoing 110 minutes.