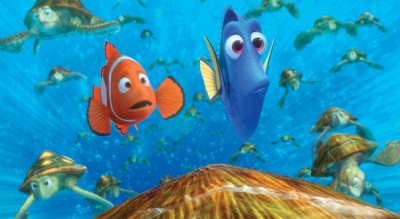 The new 3D conversion that's prompted the re-release of Disney/Pixar's Finding Nemo isn't exactly earth-shaking. It nicely immerses the viewer in its undersea world, yes, and spotlights a couple of already eye-catching foreground/background compositions (Dory reading the scuba mask while Marlin is chased behind her; the pair bickering as a whale approaches behind them), but that's about it. All told, there's not much of a reason to see Finding Nemo in 3D. But then again, there's not much of a reason to see any movie in 3D, a technology that mostly serves to throw a couple of more bucks in the pockets of penny-pinching studios while providing moviegoers a gratuitous level of "engagement" whose primary function (for this viewer, anyway) appears to be the expedition of headaches. With most films, the 3D doesn't really matter. And that's the case here as well, since this cash-in rerelease is mostly worthwhile for giving us the welcome opportunity to see and enjoy Finding Nemo again.

It remains one of Pixar's finest efforts, a crisp and masterfully executed hybrid of personality comedy, family drama, and good old-fashioned adventure. In case you somehow haven't read a plot summary of this eight-year-old film: Marlin (voiced by Albert Brooks) is a clownfish who loses his beloved, and most of their eggs, in the prologue. He raises his only child Nemo (voiced by Alexander Gould, who went on to co-star on Weeds) with what could politely be described as an overprotective disposition, but in spite of Marlin's efforts, his son is scooped up by a diver, leaving Marlin to desperately try to locate his dear Nemo. He is aided by Dory (voiced by Ellen DeGeneres), a cheery fish who suffers from short-term memory loss.

The film is, in most of its scenes, comic in nature, and the script (by director Andrew Stanton, Bob Peterson, and David Reynolds) is filled with foxy bits and bouncy running gags, like the misperception that clownfish Marlin is supposed to be funny (he has one joke, which he tells badly), or Dory's trouble remembering the name of Marlin's son (she dubs him Bingo, Fabio, Harlo, and Elmo, among others). Their adventures in the deep blue sea create several funny set pieces, the best among them a meeting of sharks bent on self-improvement; that scene also includes a particularly delicious two-fold in-joke, since the main shark is both named Bruce (the crew nickname for the mechanical Great White on the set of Jaws) and given an Australian accent (a la Monty Python's "Bruces sketch," with a crew of Australian professors, all named Bruce). And the film's got one of the classiest (and funniest) fart jokes in all of movies. ("Nice.")

Brooks and DeGeneres make for an effective comedy team, he playing the straight man to her broad dizziness (as he speaks to her in the darkness of the depths, she asks, "Are you my conscience?"). Brooks mostly takes the role seriously, in fact; while his long-cultivated persona of neuroticism is a nice fit for the role of the worried parent, he plays the fear and desperation of that heartbreaking opening scene--seriously, it's like Bambi's mom level sad--totally straight, and beautifully.

Stanton stumbles a bit with the overstuffed ending, which squeezes in one more action beat and tearjerker moment than it needs, and while the lobsters with Boston accents and the "mine!" shrieking seagulls are perfect personifications, the surfer dude turtle thing was tired back in '04. That's about all of the complaining I can muster up; Thomas Newman's music is wistful and lovely, particularly during that slow push in on Nemo as he's told of his father's exploits, and the unlikely affection between Dory and Marlin is disarmingly understated ("I look at you, and I'm home"). Come for the 3D, I suppose, and enjoy the peculiar beauty of the "mouth of the whale" scene, or the ingeniousness of the fish POV while visualizing Nemo's getaway plan. But, as before, you'll stay for the indelible characterizations, the warmth of the humor, and the thankfully sophisticated storytelling.