Katy Perry The Movie: Part of Me 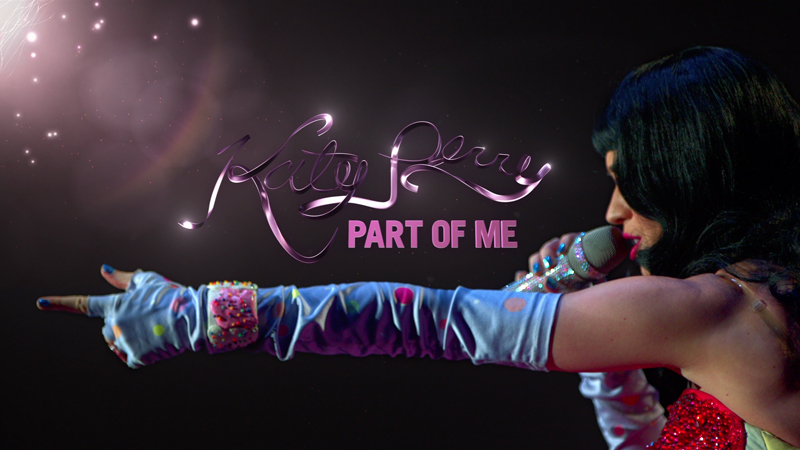 
The Movie
A confession: I am not the biggest Katy Perry fan you'll ever meet. I can certainly appreciate the finely-tuned pop songs that have made her an international sensation, and cannot deny her physical appeal (not to mention her exquisite taste, as displayed by her marriage to Russell Brand.) My first experience with her, "Ur So Gay," with its unique sound and cute wordplay, made me pay attention, but the more generic follow-ups left me less intrigued. She was destined to exist on the fringes of my musical world, where other Top 40 music stars exist for a short time before being replaced by the next hot thing.

But then a funny thing happened. Driven mainly by my daughter's love of Perry's song "Firework," we sat down to watch Katy Perry The Movie: Part of Me, and I found myself hooked on her story. The daughter of a deeply religious couple, Perry picked up music as a young girl, and found potential success as a singer-songwriter, only to find her career stall when her label couldn't sell her sound. So a few changes and a more mainstream sound, and suddenly Perry is one of the world's biggest music acts, a not-so-overnight success story told in this film through old videos and interviews with her support network, which balances her meteoric rise with a rocky personal life, as her relationship with Brand suffers while she tours the world. 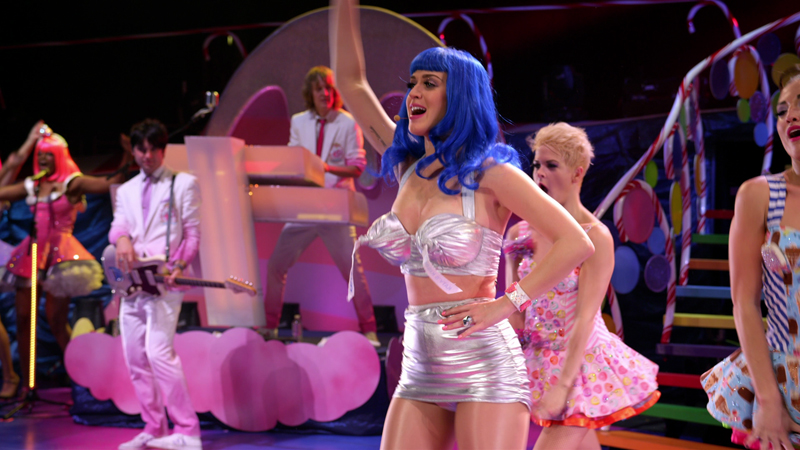 The thing is, it's all a little too perfect. Certainly, the phrase "truth is stranger than fiction" is the reason why so many documentaries are so fascinating, but something about the perfect way all the pieces come together in this film feels a touch manufactured. Then it becomes clear, as one realizes the directors of this film, Dan Cutforth and Jane Lipsitz, are reality TV masterminds, the team behind shows like Top Chef, which watch a story unfold under the glare of many cameras, and then tell a more engaging, heightened story through the power of precision editing. That's not to say the things seen in the film, including the dramatic marital strife, didn't really happen. It's just a question of whether they happened this way. After all, when you see the earnest teen singer songwriter turned pop princess tell you you need to be true to yourself, you have to question what you're being told. Either way, Cutforth and Lipsitz put the puzzle together smoothly to create a solid narrative.

No matter what's the real truth, the film lives and dies on two factors, Perry's concert performance and Perry's likability, and on both counts she succeeds. Perry's show is a kaleidoscope of sparkles and swirls, blending a candy-colored innocence with a big-breasted sexuality that manages to be more playful than perverted, while her music is full of giddy fun (when it's not being overwhelmingly earnest and heartfelt.) Meanwhile Perry's willingness to be filmed without make-up, her sincere goofiness and an outward devotion to her fan base makes it easy to root for her. Even when things are going bad, and the grind of her tour is wearing on her, she still seems pretty positive. Again, this could easily be the work of the chief Magical Elves, but considering Brand refuses to say anything negative about his ex, maybe that's just her. Like they (never) say, if Katy Perry didn't exist, we'd have to invent her. 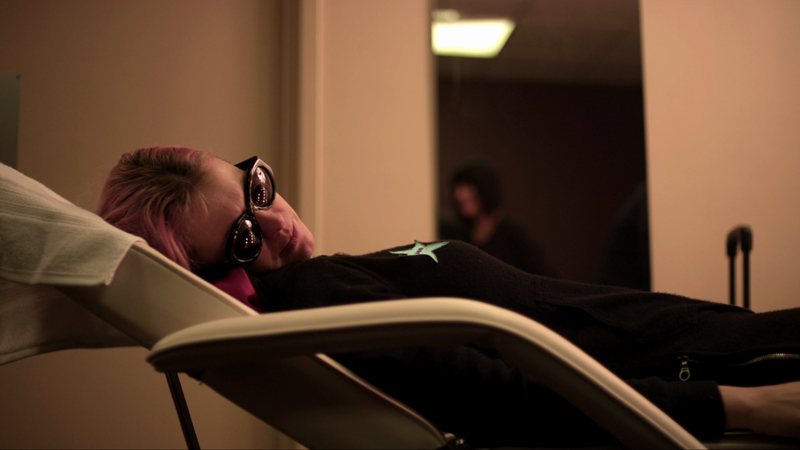 The Discs
The film arrives in a two-disc set, with a Blu-Ray and DVD, which are packed in a standard-width dual-hubbed Blu-Ray keepcase. The Blu-Ray has a static menu, with options to watch the film, select scenes, adjust the set-up and check out the extras. Audio options include English DTS-HD Master Audio 5.1 and English Dolby Digital 2.0 Descriptive Video Service, while subtitles are available in English, English SDH, French, Spanish and Portuguese.

The Quality
The 1080p, AVC-encoded transfer mixes a variety of sources, including old video clips, which results in a bit of a mixed bag quality-wise (even if some of Perry's old home videos look better than some DVDs.) When you're seeing Perry on-stage though, the video looks brilliant, with tons of fine detail and beautifully reproduced color, which is a key considering her show's sets and costumes. Black levels are sufficiently deep, and there are no issues with digital distractions, despite an overwhelming amount of movement in nearly every number. Even the low-light crowd shots and backstage footage aren't bad, even if they do display an obvious amount of noise.

The DTS-HD Master Audio 5.1 track delivers a booming experience when Perry's in concert, with nicely defined elements in the side and rear speakers, which stand-out from the main thrust in the center speaker, with everything coming at you at full-strength, replicating the arena experience well. When not on stage, the film is obviously far more low-key, but the voices are captured well, presented front and center, with quality separation from the non-concert soundtrack choices. There's nothing very noticeable in terms of dynamic mixing, but there's nothing noticeably negative throughout either

The Extras
The extras kick off with two complete songs from her California Dream tour, "Last Friday Night" (4:17) and "Waking Up in Vegas." These clips give a better idea of what Perry's stage show is like, but they also give a more honest view of the crowd, which is a bit less manically happy than they seem in the film.

Two deleted segments follow, with "Grandma: Thinking of You" (5:57) and "The Grammys You'll Never Take Away From Me" (5:19.) Though the extra time spent with Perry's grandmother is interesting for her tales of old-school Vegas, the Grammys clip is more worth your time. Taking place shortly after the break-up of her marriage, this clip reveals an angry Perry, which is sharp contrast to the weepy one seen in the film, and wouldn't have fit with the narrative constructed for the movie.

A six-part look behind the scenes of the California Dream Tour (19:17) is also a quality addition to the set, as it focuses on Perry's sub-par dance skills (making her unique amongst pop stars), her friend and family and even a look at the business, as she's concerned for sales of her latest single. The bit about her celebrity pals may be the most enlightening though, as she has to trade a lame promo for Justin Bieber's Christmas album for her sister to get a picture with the haircut.

Also included in the package is a DVD copy of the film (sans extras), a streaming Ultraviolet copy of the film, a digital copy, and an entry to win a chance to meet Katy Perry. 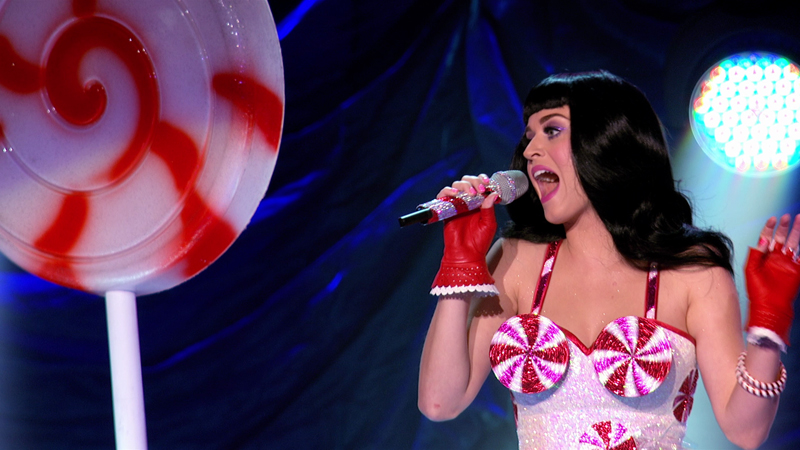 The Bottom Line
If I was was looking to become an icon, I would put myself in the hands of Cutforth and Lipsitz, who have created an All-American legend around the singer, making a pop superstar into an accessible, hugely sympathetic example of success through hard work. Is it all true? Is that really important when it's so well crafted? The disc's quality is equally as good, and you get nearly 40 minutes of interesting add-ons, extending your Perry Party. As long as you can find her music at least palatable, the film is worth checking out.