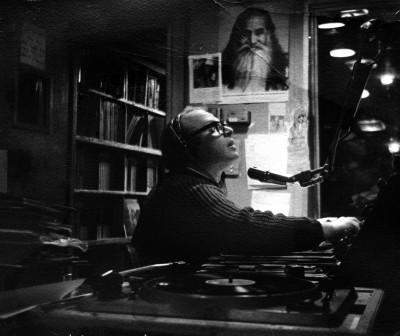 Bob Fass speaks to the night people, "the unsung heroes of New York City." His voice is smooth but occasionally halting, stopping to search for words, deciding where he wants to go next. His show is not scripted, or even planned--he's one of the creators of "free-form radio," a stream-of-consciousness broadcasting style that rolls with the punches and lets the listeners take much of the responsibility. He broadcasts to an "invisible community"--he calls them a "cabal"--and has done so on NYC's WBAI radio since 1963. Paul Lovelace and Jessica Wolfson's documentary about Foss takes the name of his show, and applies it to his entire career, and his life (which are basically one and the same): Radio Unnameable.

Fass, a sometimes actor and full-time observer, was a full-throated participant in the early-sixties Greenwich Village scene, and his original intention was simply to bring that scene to a radio audience. He would open up the mic and talk, and encourage his listeners to call in and do the same. Musicians would drop in to chat or play: Dylan, Ritchie Havens, Peter Paul & Mary, Joni Mitchell, Patti Smith, Carly Simon. Arlo Guthrie debuted "Alice's Restaurant" on Fass's show, and Jerry Jeff Walker did the same for "Mr. Bojangles."

A roll call like that would ensure Fass some kind of immortality on its own, but music wasn't really what his show was about, and neither is his film. As that nebulous idea we think of as "The Sixties" took shape, his show became a diary of the movement, a transcript, maybe a newspaper. "There was a scene developing," he says now. "It was very exciting." In February of 1967, his listeners converged on Kennedy airport for a "fly-in," a "wonderful event that no one would understand." It was followed by a "sweep-in" during the garbage strike that spring, a "be-in" at Central Park, and then, finally a "Yip-In" at Grand Central the following March.

The tick-tock of that event, which started out as groovy as its predecessors before going very wrong, is one of the documentary's finest sequences, combining well-worn film of the event with remarkable tapes of callers phoning in from the scene, early "citizen journalists" describing the actions of brutal, out-of-control police. Nearly as riveting is a section shortly thereafter, in which Fass vividly recalls a November 1971 call from a listener who had taken an overdose of sleeping pills, and wanted to talk to the host during his last moments on this earth.

Those tapes are riveting (we're lucky to have them--a section late in the film shows how all of his recordings were barely saved from the WBAI dumpsters). They also become a high point around the hour mark that the filmmakers can't maintain in the final third; in a reflection of the splintering and sputtering of the movement, and of the loss of focus for the station and the show, the film gets somewhat bogged down in the specifics of station politics that took him off the air for seven years.

But if the momentum flags in the third act, Radio Unnameable is nevertheless a valuable document and a real kick--the archival peeks at the city's history are a treat, and the incorporation of stock footage is witty and entertaining. Fass still does "Radio Unnameable" on WBAI, but he only broadcasts once a week, and as a volunteer. His wife says that the station hasn't paid him since he returned in 1983 after that six-year sabbatical, and that is, to put it mildly, unfortunate. His story is the story of the New York counterculture, and those recordings are a living, breathing, vital history of that time.