Perks of Being a Wallflower, The 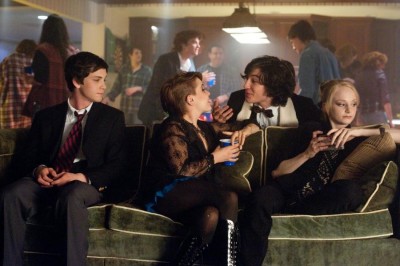 The trouble with critiquing the film adaptation of a beloved novel is that, invariably, some wisenheimer has to pipe up and tell you that whatever issue you've taken with the film--a plot point, a characterization, what have you--was present in the book, and was thus absolutely necessary, which you'd know if you've read the book you unread ignoramus, etc. etc. (For whatever it's worth, if I took the time to read the source material before seeing every film adapted from a book, I'd never see any movies.) But a film is not, and should not be, a companion dramatization, performed for the benefit of the reader; it must exist as its own entity, and whatever doesn't translate must go.

This is a very long way of getting around to saying that, for much of its running time, Stepehn Chbosky's The Perks of Being a Wallflower is a very fine film indeed, a smart and knowing portrait of (first) high school alienation, and (then) of finding a home among the like-minded. It creates distinctive and complicated characters, tells a compelling story, and creates tensions and conflicts of classical storytelling. And then it just falls apart.

We'll get back to that. What's interesting about the film is that, until that moment, it seldom steps wrong; I've seen few films that so evocatively capture the very specific loneliness of teenage years. The protagonist is Charlie (Logan Lerman), who begins his freshman year with a countdown of the days remaining in his high school education (1385, for the record). He doesn't have any friends, and is recovering from more than one past trauma; he sits quietly in class, and there's a great scene early on where his friendly English teacher (Paul Rudd) picks up on Charlie's conundrum of being both the kid who knows all the answers, and knows better than to say them.

Eventually, he makes friends--first with Patrick (Ezra Miller), a gay (and out) rabble-rouser, and then with Patrick's step-sister Sam (Emma Watson), a sweetheart with a bad rep. Their trials and tribulations, together and apart, make up the rest of the narrative, and while it gets awfully precious in spots (and a line like "Welcome to the Island of Misfit Toys" is a bit on the nose, methinks), Chbosky's script at least acknowledges the occasional verging on familiar territory, via Patrick's priceless line "My life is officially an After School Special. Sonofoabitch!"

Miller crushes it with that line, and most of the rest too; he's playing a variation on some of his other characters, but he fills in some interesting shadings, and his primary plotline--a dizzyingly difficult down-low relationship with a closeted jock--is rich enough to fuel its own film. Lerman mostly has to play the straight man, our entry point, but he hints at the trouble in his past without telegraphing, and plays his scenes with Watson with a palpable longing. You can't blame him--it's impossible to watch her enthusiastic dancing to "Come on Eileen" and not fall for her, just a little.

The rest of the cast is stuffed with actors who tend to perk up any flick: Rudd turns in a trim, easy-going performance, the wonderful Melanie Lynskey puts across considerable heartache in a role only glimpsed in flashes, and Mae Whitman nails the fascinating duality of the fiercely independent intellectual who immediately turns into clingy jelly in a relationship.

Chbosky, who penned the novel, also wrote the screenplay and directed, and he's got a filmmaker's instinct. The picture moves smoothly and professionally, and I particularly admired the unassuming way he sets the story in the early 1990s without being obnoxious about it; it just sort of reveals itself as happening at that time, without overdoing the music or clothing cues, and feels more like a movie that was made then and hid away for a while.

And yet, it may well be Chbosky's closeness to the material which kept him from seeing that its ending doesn't play at all. I'll not spoil--suffice it to say that it takes a hard right turn into psychological mumbo-jumbo, with buried secrets revealed and Joan Cusack in a labcoat, and it all just feels grafted on to the modest story that's come before, in a failed attempt to make it heavier or more important. Again, for all I know, maybe it flows just fine on the page. But it comes off pretty sour onscreen.

That said, Chbosky finds exactly the right note for the final scene and closing voice-over, and what comes before its ponderous skid is still well worth recommending. The Perks of Being a Wallflower is beautifully acted and keenly observed, and (most of the time) it's sweet, and warm, and sincere.