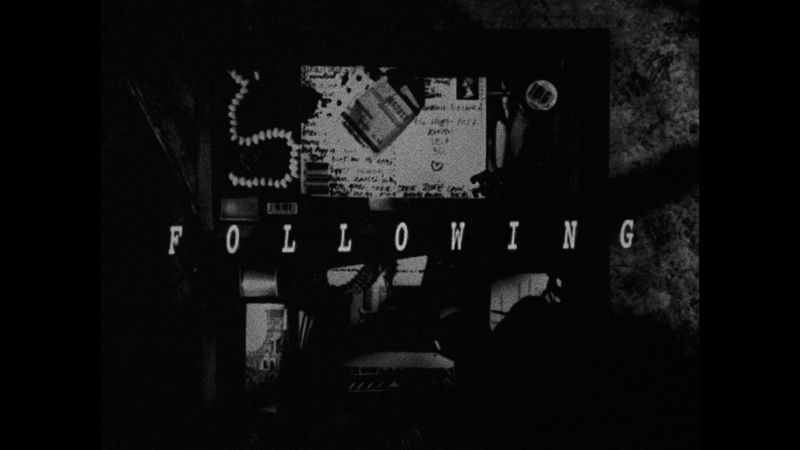 
The Story So Far...
Christopher Nolan's first feature film got a release on DVD following his break-out success with Memento, hitting the platter in December of 2001. Despite its arrival early in the digital age and the film's relatively low profile, it was a fine package. DVDTalk has a review of the DVD.

The Movie
It's crazy to think that if Christopher Nolan hadn't reinvigorated the Batman franchise with his grounded trilogy of superhero films that he might be known as a gimmick filmmaker, but when you look at his canon, along with some solid lesser-known movies, it's best known for films featuring tricky construction, despite the quality storytelling they contain. Both lesser-known and twisty in plot, his feature-film debut, Following, set the stage for a career that balances the ability to please crowds with the touch of an artist.

A black-and-white noir story of trust and betrayal, this film establishes many of the themes that would become hallmarks of Nolan's films, as it tells the story of Bill (Jeremy Theobald), a young writer with an unusual habit. Hoping to learn more about people, he takes up "following," watching people from a distance as they go about their day. Thanks to a set of rules he crafts, it's a mostly uneventful quirk, until one day one of his following subjects (Alex Haw) notices his attention, and calls him on it. Cobb is a thief, and the chance to follow someone so interesting draws Bill in, and soon, he's joining Cobb on his illicit adventures.

There's not a whole lot that can be said about the rest of the plot without risking ruining the surprises that lay in wait, but as is often the case with stories about people drawn into a life of crime, things don't turn out quite as planned. The enjoyment is in seeing how things unfold for Bill, which is a journey worth joining him on. As Cobb, a burglar with a unique code of ethics and intriguing motivation, Haw is fantastically charming, and you'll find yourself as much along for the ride as Bill, especially when a tempting mystery woman enters the picture, and their break-ins become more complicated than they first seem. 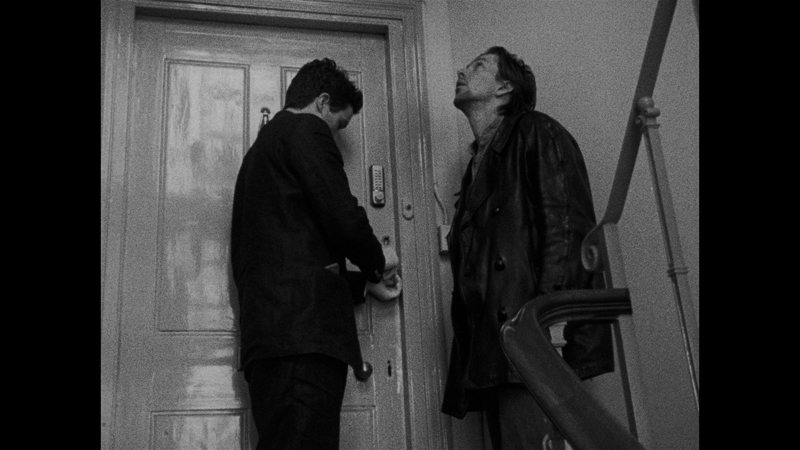 Part of what makes the story so interesting is how it's told, as Nolan employs some of the same non-linear storytelling that helped make his name in Memento, The effect isn't as dramatic or as obvious as it was in establishing Leonard Shelby's memory loss, but it's just as naturally a part of the story, and quite effective in putting the viewer off-balance as you try to figure out just what's happening. When you can't trust your own senses, you certainly can't trust the characters, Yet, everything is laid out in front of you, so when all is said and done, there a sense of satisfaction that not every thriller offers.

For anyone looking at this as the chance to suss out a future auteur, there are definitely points that are undeniable peeks at Nolan's promise as a filmmaker, most clearly in the dialogue, which is full of smart exchanges and captivating runs, establishing Bill and Cobb efficiently through their conversations. The smooth way the plot's threads weave together are also an early example of the brilliant plotting he'd display throughout his career. Of course, a micro-budget and a tightly-contained story doesn't allow his eye for composition to shine the way it would later, but shooting in black and white let him display a burgeoning mastery of shadow and light that's served him well in the Batman films, while his pervasive use of score (provided by frequent collaborator David Julyan) is just about perfect right out of the gate. 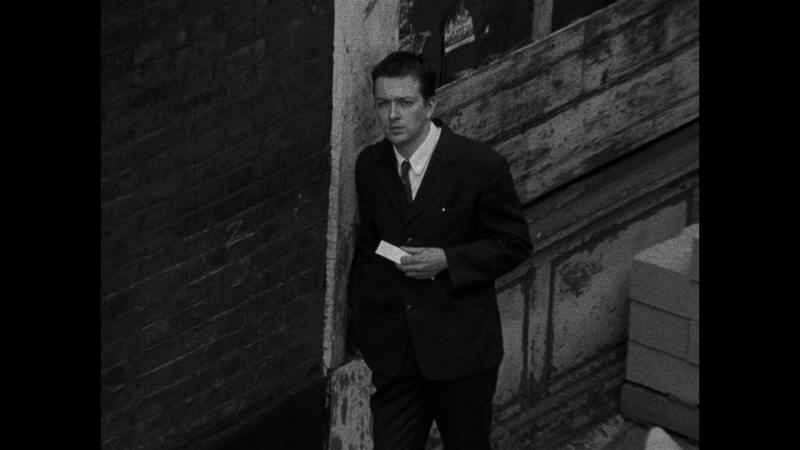 The Disc
The film arrives on a Blu-Ray disc, packed in a standard-width, clear Blu-Ray keepcase with a two-sided cover and a booklet. The blu-ray features the standard gorgeous Criterion menu design, with options to watch the film, select scenes, adjust the set-up and check out the extras. Audio options include English DTS-HD Master Audio 5.1 and LPCM 1.0 tracks, while subtitles are available in English SDH.

The Quality
The 1.33:1 1080p, AVC-encoded transfer, which was created from a 16mm original under Nolan's supervision, looks simply fantastic when you consider the film's age and budget. Though no black and white film is likely to ever surpass the clarity and sharpness of Criterion's Carnival of Souls transfer, this shadowy treat is beautiful in its own right, with great black levels and a crispness that doesn't come at the cost of the film's original grain. There's no concern about dirt or damage, nor is digital compression an issue. This is an all-around impressive-looking release.

While the original DVD went with a stereo presentation, this release went in two different directions, offering the original mono soundtrack in LPCM and a newly created DTS-HD Master Audio 5.1 track. While there's always something to be said for delivering a film the way it was originally intended, there's nothing wrong with letting a filmmaker make improvements as technology and budget allows (as long as the original is still left intact, Mr. Lucas.) The film, which is relatively quiet with the exception of Julyan's score, doesn't need much more than the clean, distinct mono track, but the new 5.1 presentation opens the fllm up a bit, giving the score even more power thanks to the emphasis in the surrounds, and lets the clean, distortion-free dialogue stand on its own in the center channel.

The Extras
The original 2001 DVD of Following had a surprising amount of extras, and the key pieces of bonus content were either ported over or have been built upon for this HD release. Up first is the original audio commentary by Nolan. Before he was churning out box-office blockbusters, Nolan was a cost-conscious indie director, and this track speaks to that status, as he spends a great deal of time offering insights about working without a budget, offering tips and advice to those working on their own films. Some of his insight has aged a bit over the past decade, as digital cameras have cut costs, but it's his thoughts about planning and getting the most bang for your buck that are the most valuable.

Also carried over from the DVD is a linear edit of the film, thankfully not hidden behind a puzzle like on the Memento DVD. Because this film isn't as dramatically out of order, the linear cut isn't as notably different, though the plot is a lot clearer (making Nolan's choices obviously key to the feel of the film.)

On the DVD, you could watch the entire film in a multi-angle mode that let you switch betweem the script (with Nolan's hand-written notes) and the movie, but here there are just three select scenes. The presentation is a bit smoother, as you can see both the script and the film, rather than flipping between the two, but not getting the entire script cuts down on some of the insight.

Also returning from the DVD are the film's trailers, both the original and the re-release, which are presented in HD (1080i). There were some text bios (ah, the early days of DVD extras) that didn't make the jump.

Cementing this set as a tribute to the start of a great filmmaker's career, Nolan's first short, the three-minute Doodlebug, is available to watch. Like with Following, the seeds of Nolan's genius are obviously already bearing fruit, even if the presentation is a touch cheesy due to the low-budget special effects. It's an entertaining little short either way, and the impact of the score and sound effects, a Nolan hallmark, are present even in this early work.

Also new to this release is a 27-minute interview with Nolan (recorded in 2010), which allows him to talk in some detail about the origin and production of Following, especially the value of technology, the development of his style and interest in film and what this early film taught him when it came to approaching his more recent, bigger-budget films. Considering the detail he goes into on the commentary and the technical details covered here, the informative insights help reduce the sting of not getting more new material.

Wrapping up the extras is the usual Criterion essay, in a thin eight-panel insert, this time by the Film Society of Lincoln Center's Scott Foundas, focusing on Following's importance as the first salvo in a now-legendary Hollywood career. I don't know if keeping with the monochromatic color scheme was worth printing it in black on silver, a difficult set-up for legibility. 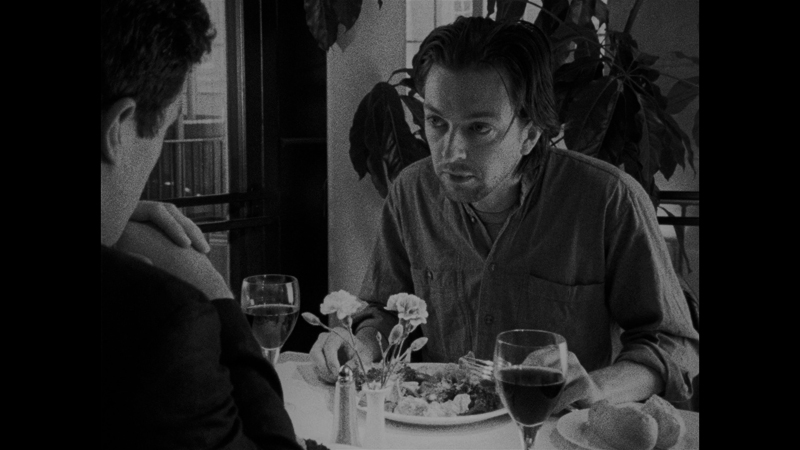 The Bottom Line
With some filmmakers, you just know they are going to be something special from their first film, and that's certainly the case with Christopher Nolan and his inky, temporally-disjointed debut tale of misplaced trust. The film is a bit short, and for anyone who owns the original DVD, there's only so much new content to check out, but the movie does look and sound great, and is a great package for anyone new to Nolan's fan club, an organization that's experienced a bit of growth in the past 11 years.