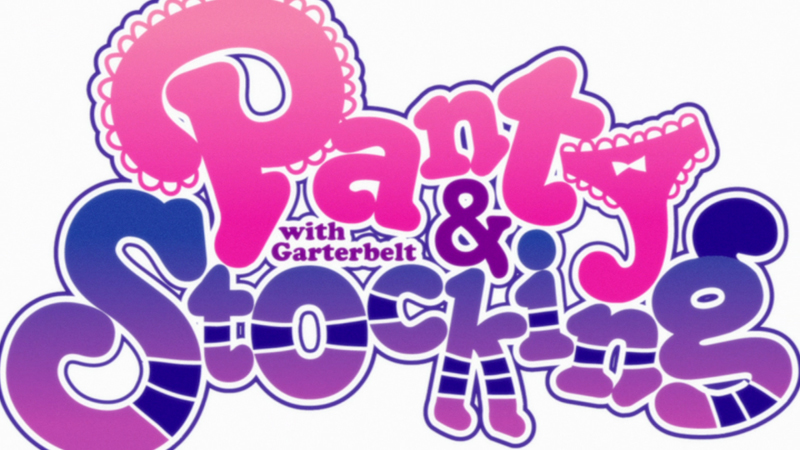 
The Show
When I saw a trailer for Panty and Stocking with Garterbelt, I was immediately hooked, and not because of the promise of a sex-filled romp offered by the title. The art style, though obviously anime, is wholly unique and chaotic, embracing a feel that ties nicely to the series' balls-to-the-walls pace, which lets anything happen at any time, including sounds appearing as text effects like a comic book. Predictable is the last word you could use to describe this series, in every sense. If I had to describe the series succinctly, a very difficult task, I would probably say it's an adult version of The Powerpuff Girls mixed with Scott Pilgrim vs. The World, which, to me, sounds like one of the coolest things you could ever think of.

Panty and Stocking Anarchy are a pair of sister angels who have fallen from Heaven, and now have to earn their way back in by killing evil ghosts and collecting the coins they leave behind. Working against them are their own personal temptations (for Panty, it's sex, for Stocking, sweets) and the Demon sisters, the underworld version of the titular sisters, who seek to defeat the angelic duo. Working for them though are Garterbelt, a blaxploitation-style preacher with a rather unfortunate predilection for young boys, who gives them their missions, Chuck, their annoying dog (who looks suspiciously similar to GIR from Invader Zim) and See Through, their handy car.

It's definitely a motley crew, which fits with these ne'er-do-well heroes. One of the things that stands out the most about this series is the dialogue, which is easily some of the filthiest ever to be recorded and released on the mass market, tying in well to the show's obsession with sex. If people had an issue with the language in Clerks, the things said in this series would burn their auditory systems. It comes at you so fast and furious that it nearly becomes audio wallpaper, but then a magic dirty word will come flying out and remind you of just how dirty talk can get. Based on the subtitles included, this level of cussery is a state-side addition to the series, and it was a fine one indeed, as it really goes a long way toward establishing the angels' renegade natures. 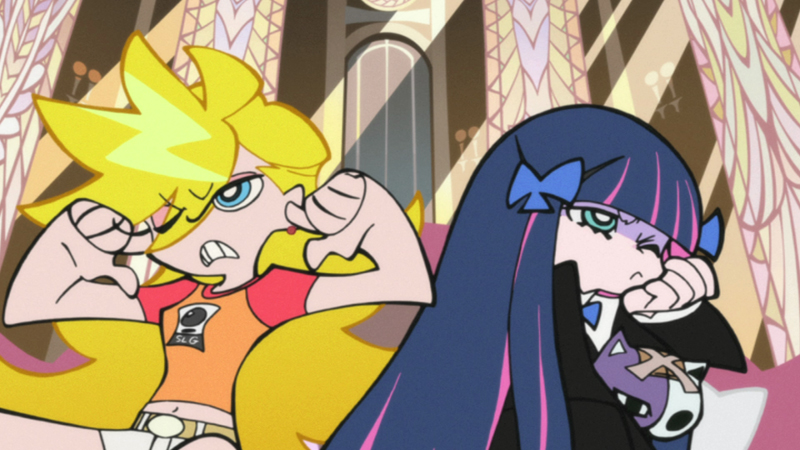 Though a lot happens in this dynamic series, including an unfortunate amount of potty humor, the story starts to get a bit superfluous a few episodes in, as the girls follow similar routines in most episodes, tracking down an evil ghost before entering the usual transformation act that turns their panties and stockings into guns and swords, before the key baddie gets blown up in a silly live-action segment. But that's besides the point. This series is more of an experience than a story you follow. From the varied styles of animation used, to the numerous homages and parodies, both in-depth (an entire episode aping old-school Transformers) to glancing (a one-shot South Park lookalike) to the madness of the subject matter (which can include anything from nose picking to sex shops to zombies and masturbation) this series would seem tailor-made for [adult swim] and your late-night supplement of choice.

While the manic animation and loose sense of reality lets the show try anything it wants, that's occasionally a weakness, as the series ends up in a few odd places that really don't work with the rest of the series. Episode 10, with it's odd three-part "Chuck to the Future" story is a bit of a strange side-step for the series, making little sense in the context of the show, while "Vomiting Point," a tale about a failing salaryman done in a very detailed manga-like anime style, is practically depressing, and barely includes the star pair. While it's certainly good to let creators stretch their legs, these episodes stand out like sore thumbs. However, that's the cost you pay, as the freedom to create such episodes resulted in the creativity seen throughout the series (including an episode using World War II in the most inappropriate metaphor ever.)

That free-form sensibility also hid what was actually a series-long storyline building with the girls and a geeky guy at school named Brief. As the series bounces back and forth through the various shorts, overdosing on the insanity, it's easy to not notice that there's an actual plot being built, with events coming to a head in the final few episodes. Once you get there, you might notice yourself actually caring about what's going on, despite the characters' somewhat reprehensible behavior. That it can tell such crazed tales while still crafting a connection says a lot about the characters' charm and the talents of the creators. Anarchy is fine in small doses, but structure is what keeps you coming back for more. 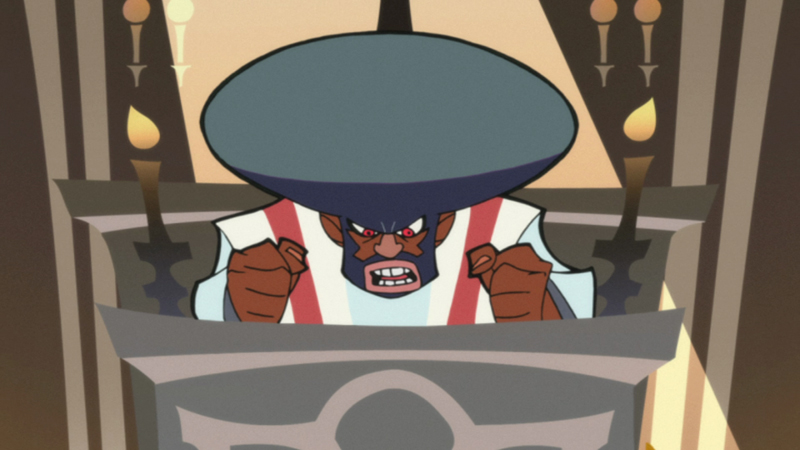 The Discs
We only received the two Blu-Ray discs for this set, so I can't speak to the packaging, but if my past experience with Funimation is any guide, it's probably oversized and unnecessary. The DVDs have simple animated menus, with options to watch all the episode, select shows and adjust the settings. Audio options include English Dolby TrueHD 5.1 and Japanese Dolby TrueHD 2.0 tracks, while subtitles are available in English.

The Quality
After enjoying the bright, colorful, sharp transfers on the DVDs, I was excited to see what the show would look like on Blu-Ray. Well, the 1080p, AVC-encoded transfers aren't much better than their standard-def cousins. There aren't a great deal of obvious issues with the presentation, as the outlines look nice (with some occasional pixelation), and there weren't any problematic digital distractractions evident. However, the colors look a bit muted, which drags the whole package down a bit and the overall presentation is too soft for Blu-Ray. Perhaps my expectations were high, but this show is such a visual spectacle that you'd think it could look better than this.

The original DVD Dolby Digital 5.1 tracks were solid, and these Dolby TrueHD 5.1 tracks deliver an incrementally better sound, bumping up the surrounds, and providing even more directionality and positioning than before, with the show's many sound effects blasting throughout. Right from the menu screen, featuring one of the show's more enjoyable songs, spread out through the surrounds and center channel, you can feel the improved dynamic mixing. Though there's a lot of activity competing for your attention, everything is clearly delineated and free of any kind of distortion.

The Extras
With this new Blu-Ray release, Funimation has tossed in a few new extras about the U.S. version of the series. "Panty & Stocking with Garterbelt Revealed: Unrated Cut" (22:54) brings together four key parts of the creative team, director Colleen Clinkenbeard and actors Monica Rial, Jamie Marchi and Christopher Sabat, to talk about the series, including their thoughts on the characters and storylines. The atmosphere is light and fun, and if you didn't love Rial before, her adorable enthusiasm will draw you right in.

It's followed by another 11:56 with the quartet, "Sit Down with Panty and Stocking," this time focusing on behind the scenes topics, including how they got involved with the show and their love of the series' expletive-laced dialogue. Like the other, it's great fun due to the fun, loose dynamic in the group.

The remainder of the extras are carried over from the DVD release, starting with the 8:51 OVA Panty & Stocking in Sanitary Box. A set of eight quick shorts, it's more of the craziness you come to expect from the series, but with such quick hits of comedy, the madness is heightened even more. This may be the most enjoyable entry in the entire series.

The live-action explosions get plenty of spotlight in the extras, starting with over 21 minutes of footage of the 16 ghost explosions, with main and alternate cameras, as well as behind-the-scenes clips from each model's demise. Then, if you want to know more, a 40-minute documentary about the process is included, broken up into three parts, including on-the-set coverage, a round-table interview with the crew and some post-explosion thoughts. The creative team is quite thoughtful about all the work that went into the scenes, including the importance of being on-hand when their hard work is destroyed. (NOTE: These two featurettes, and the two mentioned later, are included in Japanese, with English subtitles.)

There's a host of commercials included for the series, with seven groups of clips, totalling nearly 14 minutes, however most of them seem to be pulling from the same pile of footage and voice-over. There's no real explanation for what separates them outside of the vague collection titles, so they mostly blur together.

Up next is an awesome featurette that should be included with more DVDs. PR guys Nishiyama and Manabe, interview several members of the Japanese cast and crew in front of an audience at the Loft/Plus One, and conduct live commentaries on some of the episodes. At 23:50, this pulls clips from all the activities, which featured 12 participants, including director Hiroyuki Imaishi and the voices of Panty and Stocking, and also reveals the top five in fan voting for the series' best episodes. It certainly could have been longer and probably would have been just an entertaining.

There's more from the Japanese crew in the 10:59 "Making of Lingerie Scene" which shows how the team shot one of the big live-action/animation hybrid scenes from the series' finale. What's so interesting about this topic is the fact that they didn't know how to do it, and were learning on the fly.

Moving across the Pacific, we get a 16-minute audio featurette (backed by footage) on the voices of the dubbed version of the show. Split up into four segments it includes some funny outtakes, the actors' favorite moments from the show, their own dirty jokes (which are, in some cases, seriously dirty) and over four minutes of one of the actresses burping into the microphone. A fun time can be had by all above the age of consent.

The fun wraps up with a short U.S. trailer for the show, and the opening and closing themes presented without text on the screen. 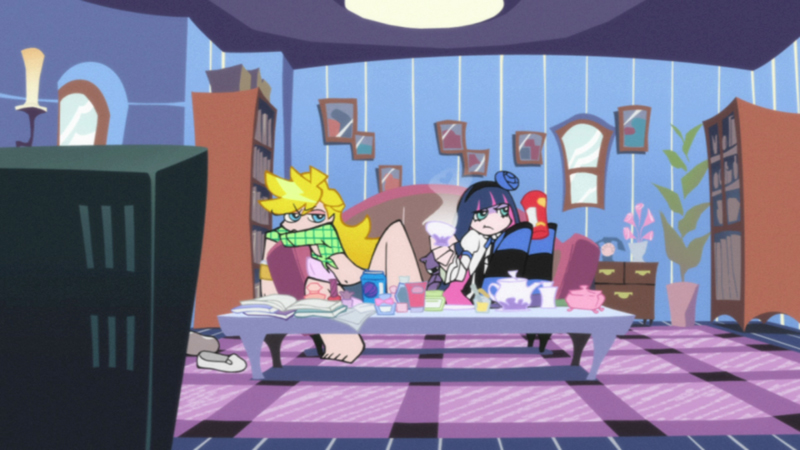 The Bottom Line
It's hard to say Panty and Stocking with Garterbelt tells a great story, but watching it is an experience that's hard to compare to the vast majority of the entertainment that's out there, bridging the gap between the otaku and the late-night comedy fan in one neat, anarchic package. Now available on Blu-Ray, the show isn't much improved over the previous release, making an upgrade a questionable purchase, but it does toss in a few exclusive extras, so if you held out, good on ya. For those new though, if you can deal with foul language, potty humor and nearly psychotic pacing, then there's plenty to like about Panty and Stocking.