Discotek Media // Unrated // November 6, 2012
List Price: $29.95 [Buy now and save at Amazon]
Review by Stuart Galbraith IV | posted March 19, 2013 | E-mail the Author
Little Nemo (1989), a Japanese-American co-production eventually released in the U.S. in 1992 as Little Nemo - Adventures in Slumberland, is a surprisingly good adaptation of Winsor McCay's comic strip. It's generally faithful to McCay's original stories and designs, if disappointingly altered slightly to give its characters a more contemporary appearance. But it's equally fascinating for its long and complicated production history, one that straddles virtually every era of animation across two continents. It anticipates the limitless imagination of Japanese animation then emerging, a style that would find an international audience and critical acclaim just as this was going into release abroad.

Though chiefly produced in Japan, the breadth of international talent involved is staggering. Ray Bradbury, Jean "Mœbius" Giraud, and Robert Towne worked on the story, while Ollie Johnson and Frank Thomas, two of Walt Disney's original "Nine Old Men," were also consulted. Richard and Robert Sherman, themselves Disney veterans, wrote the film's songs. Studio Ghibli's Hayao Miyazaki and Isao Takahata worked on the film in its early stages but quit over creative differences; later Brad Bird (The Iron Giant) worked on it, too. The voice cast includes veterans like June Foray and John Stephenson, but also up-and-comers like Nancy Cartwright and Tress MacNeille.

Financially, the movie that resulted bombed spectacularly, grossing just $1.37 million in the U.S. against an estimated negative cost of $35 million, this despite good, even startled reviews. A limited 2005 reissue of the film in several U.S. cities again failed to find the movie a wider audience.

The now long-defunct Hemdale originally released the picture in the U.S., but the rights seem to have reverted back to Tokyo Movie Shinsha, now TMS Entertainment. The Blu-ray, from Discotek Media, is excellent. Happily, it's the longer, Japanese cut of the film, running 95 minutes, yet includes both English and Japanese-language audio, the latter with optional English subtitles. The transfer is very good and it's accompanied by loads of interesting extra features. 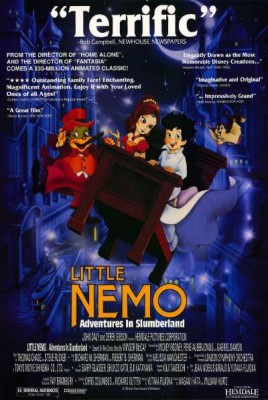 The story, wisely, is set in 1905 New York, the same year and place McCay's stories debuted. A young boy, Nemo (voiced by Gabriel Damon), is disappointed that his father seems disinterested in taking him to the circus, and later gets into trouble after feigning sleepwalking while attempting to steal one of his mother's pies.

But at night Nemo dreams of Slumberland, a magical fantasy world that also subtly mirrors the circus attractions and its performers, a nice touch. Professor Genius (René Auberjonois) arrives at the foot of Nemo's bed with a royal invitation from King Morpheus (Bernard Erhard) to become playmate to the royal princess (Laura Mooney), a girl Nemo's age.

Accompanied by Nemo's pet flying squirrel, Icarus (June Foray, alas, does not perform this voice), Nemo is taken to Slumberland aboard a beautiful, massive dirigible, similar to the model dirigibles hanging from Nemo's bedroom ceiling. At the castle Nemo enjoys playing with the Santa Claus-like engineer of a model train they ride, but he turns out to be the king himself. Morpheus reveals that he also plans on making Nemo his heir in addition to serving as the princess's playmate. He's given an ornate gold key that will provide him access to every room in Slumberland but he must not ever use it to open the one door decorated with the same dragon insignia as on the key.

Naturally, Nemo is unable to keep this promise for very long. This is because he runs into Flip (Mickey Rooney), a cigar-smoking, mischievous clown (or maybe a blackface minstrel, though Rooney doesn't play him that way) who quickly gets both of them into serious trouble. (Reader Sergei Hasenecz notes Flip is darker in the movie than in the strip, suggesting that characteristics of The Imp, the one McCay character notably absent, may have been folded subtly into Flip.)

As in McCay's original script, Little Nemo is alternately classically charming and disturbingly surreal. About ten minutes were cut from the film for its U.S. release in order to secure a "G" rating. My five-year-old daughter loved most of this complete version, but several scenes alarmed her ("Skip, Daddy! Skip!" she demanded) so we fast-forwarded through the darkest bits. Some of this surrealism (such as the rubbery-legged walking bed) predicts the pre-Code Max & Dave Fleischer cartoons of the early and mid-1930s, at other times it anticipates ideas found in later Studio Ghibli and other Japanese anime films. I was pleased to see virtually all of McCay's characters making an appearance in the film, even including Gertie the Dinosaur.

It's easy to see how adapting McCay's strip into a feature-length animated movie presented numerous challenges, and that the various people approached (including George Lucas and Chuck Jones) or who for a time became attached to the project would have widely varying, sometimes conflicting approaches to the material. The movie that was eventually made only slightly compromises McCay's vision and thankfully avoids the overly rigid Disney Model of storytelling and characterization. (Stylistically the movie more closely resembles Don Bluth's animated features than Disney's.) But there's also not much in the way of a story, and what there is feels uncomfortably shoehorned, getting in the way of all the pretty pictures. The songs have a similar effect, but there are only a couple of those.

Discotek Media's Blu-ray is the complete, 95-minute cut of the film, in 1.85:1 widescreen and in 1080p format. It's not clear if this transfer is of an international version pre-Hemdale's cutting, or of the Japanese theatrical release version minus Japanese subtitles, but in any case the main and end titles are in English only. (No Hemdale logo appears, but Tokyo Movie Shinsha's does.) A Japanese track is also included. The image is essentially flawless, with strong color and detail visible throughout. There are two English options, in PCM 2.0 and Dolby Digital 5.1, while the Japanese track is PCM 2.0 only. All are impressive.

The disc is fairly packed with supplements, including two behind-the-scenes promotional videos, one each for the Japanese and American market, and both featuring valuable footage of various talent at work or discussing the project. There are also two "pilot films," one from 1984 (reportedly shot in 70mm but in standard-def here) and the other from '87. Both are composed of footage not used in the final film. There are also trailers for the U.S. and Japanese releases, and the opening sequence for the U.S. release version.

Not quite as great as it might have been but still pretty wondrous at times and certainly unique, Little Nemo is a must-see family film and a pleasure to watch on Blu-ray. Highly Recommended.