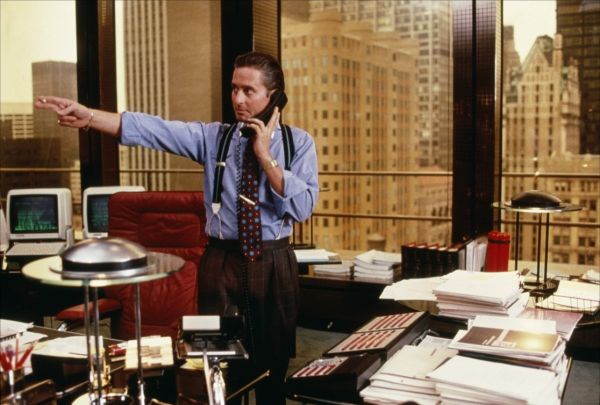 Oliver Stone's Wall Street is a landmark picture for a number of very good reasons. Its subject matter was ripe for motion picture treatment, and it was released at just the right time. Wall Street is a capsule of angst from the 1980s, capturing the morally untenable excess that defined much of that decade, and the years since. Perhaps that is the reason the film has held up so well, and why the sequel seems appropriate instead of just opportunistic.

I have the honor of now being the seventh person to review Wall Street for DVD Talk (I was also the fifth), so I'm going to keep the plot summary brief and to the point. Idealistic and idiotically naïve Bud Fox (fresh-faced Chuck Sheen) goes to work for the tiger of Wall Street, the oily and foul Gordon Gekko (Michael Douglas). Bud gets rich quick, takes up with Daryl Hannah, receives blowjobs, etc. The point is that he becomes exactly the guy that his mechanic father (Martin Sheen) tried not to raise; he loses himself and destroys the company his father works for in the process.

Oliver Stone was the perfect person to take on the subject of corporate raiders of the 1980s. An era soaked in booze and dusted with coke, Stone knows excess because he was one of its practitioners, both in life and behind the camera. But Wall Street is one of Stone's more controlled films, finding the co-writer and director behaving with something like journalistic restraint. The story, as written, is largely observational, and Stone's direction favors his actors. Sheen is green enough here to be credible, and of course Douglas owns the picture with his towering portrayal of Gekko, a cold-hearted cutthroat who we know is destined for a series of heart-attacks.

The supporting cast is excellent, once you look past Daryl Hannah's totally groan-inducing part as an interior decorator. Terence Stamp plays a rival corporate raider who Bud spies on at Gekko's behest. Hal Holbrook plays honest career trader Lou Mannheim, the inverse of Gordon Gekko in terms of his influence on Bud. Perhaps best of all is Stone regular John C. McGinley at his scenery-chewing apex as Bud's obnoxious coworker.

Equal to its command of the tone and business environment of the 1980s is the way Wall Street captures the look and feel of its setting. Robert Richardson's photography is fluid and economical, and Stephen Hendrickson's production design has surely influenced every film since that takes places in a similar environment. The images of Wall Street have stayed in the collective memory as the defining version of the way corporate America looks. It's one of the major reasons this thrilling, well-acted film remains relevant and entertaining.

Image
This "Filmmakers Signature Series" Blu-ray from Fox boasts a new transfer, which is the biggest single argument for an upgrade from this film's many prior DVD and Blu-ray editions. The image is indeed a marked improvement. Detail and depth are vivid in comparison with previous transfers. Wall Street was made in 1987, and either the film stock or color processing of that era has left a legacy of dull, greyish, very grainy masters. (This phenomenon can also be seen in the recent Blu-ray release of Adventures in Babysitting, made in the same year.) I remember seeing Wall Street theatrically. It had a bright, slick, ultra-modern look to it. The image has suffered over the years, and that's not just a matter of dated style. It looks darker, muddier. Still, this Blu-ray is a real change from every previous home video release of Wall Street.

Sound
The 5.1 DTS-HD MA mix provided here is a holdover. It gets the job done, but ambience is limited. The movie's original 4.0 Dolby Digital track is available as well, which I prefer.

Bonus Content
Everything included here is a holdover from the previous Blu-ray release, all of it in SD.