Please Note: The stills used here are taken from the standard edition DVD issued by Kino and not the Blu-ray edition under review. 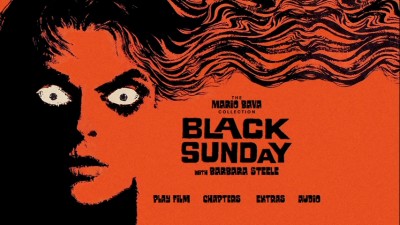 This is my first exposure to the work of Mario Bava, but based on Black Sunday, I need to start seeking out his other films right quick. The Italian horror master's 1960 debut is stylish and spooky, a little bit sexy and a little bit scary, the right combination for a ghouls and witches story.

Black Sunday opens in the late 17th Century, as the Vajda family burns one of their own, alongside her lover, for being a minion of Satan. It's a gruesome death. A metal demon's mask is nailed to their faces before they are burned, so that anyone who looks upon their corpses will know why they have died. Unsurprisingly, the devilish lovers drop a devilish curse on the Vajda family for this indignity. No matter how long it takes, Princess Asa Vajda (Barbara Steele) and Javuto (Ivo Garrani) will have their revenge.

Jump ahead 200 years, and the traveling Dr. Kruvajan (Andrea Checchi) and his young assistant Andre (John Richardson) urge their coachmen to hurry them to their destination. Despite his warnings that the way they have chosen for him will take them through treacherous and mysterious territory, they take that path anyway. The coach throws a wheel just outside a rundown cathedral. While they wait for the driver to fix their ride, the two learned men explore the ruins, discovering it is actually a mausoleum, and uncovering the witch's grave. When a bat attacks Kruvajan, he accidentally breaks the seal on her casket, unwittingly unleashing the curse. People will soon start dying in increasingly macabre manners. 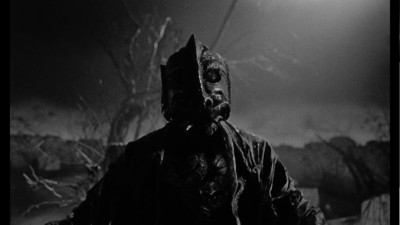 The Princess' ancestors still live in their family home. This includes her doppelganger, the dark and lovely Katia. Barbara Steele, with her large eyes and sharp features, has a face made for ghost stories, and her performance as both the innocent girl and the avenging spirit works both sides of the equation perfectly. The dual role has the interesting effect of making it so we never trust Katia, while we also have a strange sympathy for Asa. After all, regardless of what the witch was dabbling in, the root of her evildoings was love. Javuto, devoted even beyond the grave, has traversed the years to protect her from any that might prevent her resurrection. And, of course, there are sparks between Katia and Andre. It's no surprise that his affection will prove more powerful than crucifixes and spells, and it's fitting that in the climax, not only does he wrestle with Javuto over a pit of despair (both literal and metaphorical), but he must decide which Barbara Steele is the one who stole his heart. (Random Thought: Since we're talking romance and fate, I am surprised that Javuto and Andre weren't doubles, as well; it'd have been neat to see the stiff-backed Richardson playing an evil twin.) 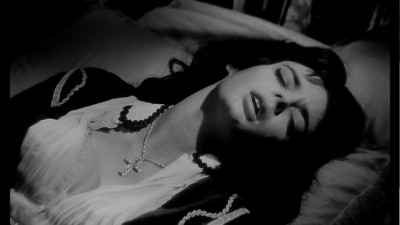 Black Sunday, which is alternately known as The Mask of Satan), was loosely based on a story by Russian author Nikolai Gogol. Bava uses these classical origins to build a foundation of respectability, only to crack it open and show the lurid drama that lays just underneath. Though arguably tame by today's standards, the way the director works around the restrictions of the era actually makes those details--the dripping blood, the heaving breasts--all the more salacious. As any horror fan can tell you, suggestion is almost always more effective than direct expression, the unseen is scarier than the seen, what is hinted at more unnerving than what is explicit. Bava and Ubaldo Terzano share director-of-photography credit, and their black-and-white images are gorgeously staged. Dark and stormy skies allow for creeping shadows, and an unknowable emptiness lurks around every corner. Evil could be hiding anywhere. 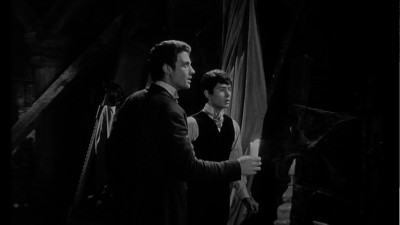 Video/Sound:
Eagle-eyed readers may note that I've already reviewed Lorber's new edition of Black Sunday, though previously it was the DVD version of this restoration). I was pretty taken with the movie, so when the opportunity came along to review the Blu-Ray, I decided to take it both so I could upgrade my copy and also to compare the difference between the standard disc and the BD. I have been curious of how noticeable the difference would be between newly produced discs in the two formats when working with the same source material, because while it's obvious when comparing a new Blu to a DVD that's many years old, I've seen some new DVDs that seem comparable in presentation to their more high-falutin' counterparts.

I am not sure the experiment yielded much of a verdict. While I think there is a slight uptick in resolution in the genuine high-def, 1080p transfer, there is also a higher instance of dust and debris. Or maybe I am just looking closer, trying to find flaw a little harder, it's hard to say--but it's arguable that with high-definition, the good and the bad are both equally more obvious. I think the light looks stronger on the Black Sunday Blu-Ray, particularly in the candlelit scenes at the castle, but the blacks also tend to be inkier, once again allowing for the white pops to be more obvious. This works in the transfer's favor when the actors are entering shadows, such as when they are going down in the catacombs--the actors and their lanterns really stand apart from the darkness before it swallows them. By contrast, outdoor scenes, with Andre riding his horse beneath an open sky, feel rich and deep, as do interior scenes with long corridors and extravagant decoration.

I can declare no real winner. We could probably nitpick back and forth frame by frame, but I doubt that will come out with any definitive answer either. My gut says either would be just as good, both are clearly better than anything that have come before as far as Black Sunday is concerned, so all things being equal, buy which format is your preference these days, you'll be happy with whatever you choose.

For another viewpoint, you might also read Thomas Spurlin's excellent review of this Blu-Ray elsewhere on the site.

In terms of the edit/length and soundtrack, this release is apparently the full Italian cut of Black Sunday, including three minutes censored from the U.S. theatrical release. That said, the audio is the English dub, presented here in 2.0 mono. Most Italian films of the era were dubbed over in post-production in a variety of languages, and they often used international casts speaking in different tongues (there are times where you can tell that the actors were delivering their lines in English), so there is no one definitive soundtrack (though I suspect there might be some purists wishing for an Italian alternative). The voice work here is really good, and the sound quality is excellent. The audio is clean and the volume levels strong.

Oh, and I will say, I liked Black Sunday even better on second viewing, so I did improve its score in terms of repeat viewability!

Extras:
The bonus section collects the Black Sunday U.S. trailer, international trailer, and a TV commercial, alongside trailers for other Mario Bava films.

There is also a full-length audio commentary by Bava-expert Tim Lucas (he literally wrote a book on the subject). It's an excellent track, detailing both the story behind the production and also offering analysis of what we are seeing.

FINAL THOUGHTS:
Just in time for Halloween, Kino's remastered re-release of Mario Bava's 1960 spook story Black Sunday scares in all the right ways. It's mysterious, sexy, and breathlessly lurid. A centuries-old curse revives a burned witch and her murderous lover, so that they may exact revenge on her descendents. The dark and lovely Barbara Steele plays dual roles as the witch and her current doppelganger, and you may find yourself unsure of which version you like more (such is the witch's spell!) People die in increasingly gruesome ways, and the do-gooder hero, of course, does some good, warding off the malevolent shadows that threaten to consume his true love. Black Sunday looks great in high-definition, so if you're looking for some old-fashioned, dependable scares this holiday season--or any time, really--then look no further. Black Sunday is Highly Recommended. 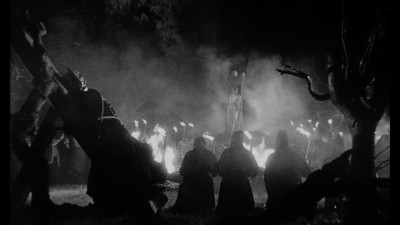