Right to Love: An American Family, The 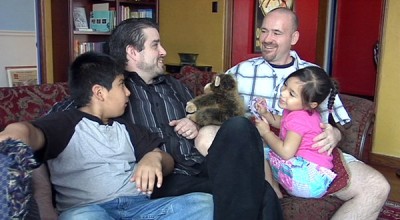 On the very afternoon that I saw The Right to Love: An American Family, an informative and emotional documentary about marriage equality, yet another key moment in that movement had arrived: the Defense of Marriage Act had been ruled unconstitutional by a New York federal appeals court. That ruling will certainly be appealed; this battle, one that evangelicals insist is for the very soul of America, is one that has been fought in courtrooms as much as in the streets or in voting booths. Gay marriage has been a hot-button topic since George W. Bush used it as a wedge issue back in 2004; in 2008, the elation of the Obama victory was tempered somewhat by California voters' decision that same day to add an amendment to the state constitution banning same-sex marriage. On it goes.

When you're talking about gay marriage, it is very easy to deal with it in the abstract--to talk about "gay couples" as a thing rather than as individual people. The masterstroke of Cassie Jaye's documentary is its very deliberate decision to put faces to those place-markers, to introduce us to the kind of strikingly average, proudly "normal" family affected by Proposition 8. Jay Foxworthy and Bryan Leffew have been together for thirteen years; they have two adopted children. When gay marriage was legal for a few months before Prop 8, they got to work on their wedding, and the ornate ceremony took place just a few days before their fellow Californians decided that their union was not legitimate.

If you've not guessed yet, The Right to Love doesn't pretend to posit some sort of necessary "objectivity"; this is a movie that is on their side, and its most emotional beats play up that allegiance--for example, an effective juxtaposition of their first wedding dance with voice-overs of marriage equality foes nattering about the sanctity of the tradition and what about the children and so on. But it's also not one-sided, and there is a difference. The opposition's arguments are presented, and given plenty of screen time. The filmmakers don't play fast and loose with the sound bites--they even show how often we hear the same arguments. But they have responses ready, both explicitly (from pundits and advocates) and implicitly (in the clearly healthy and positive family we're focusing on).

The film's structure, roughly speaking, is that it spends the first and third act talking about this family, and the second on the issue that has come to define them. That's a good mix, it seems; the middle section is a valuable post-mortem of the Prop 8 campaign, paying particular attention to misinformation by the opposition, tactical stumbles by advocates, and the stakes for everyone.

The Right to Love has its flaws--it gets a touch didactic (even for an issues documentary), some of the sequences could use some tightening, and it's entirely too reliant on peppy music montages. But it gets to the heart of this issue, and the complexity that lurks beyond the talking heads on television. The most fascinating interviews Jaye conducts are with Bryan's grandmother, father, and little brother--all three of them both supportive and ill at ease with Bryan's lifestyle. His father still doesn't seem comfortable with it, and thinks the marriage equality debate is a silly one, barely worth the trouble. But he voted against Prop 8, he says. Why? "Because I knew a family, so I voted for them." It's one of the most insightful moments in the picture, because it gets at a truth not only of the film but of the gay rights movement--sooner or later, you're going to know a gay person, and once you do, it's harder to rally against their rights. The Right to Love is occasionally problematic filmmaking, but it is admirably focused on helping facilitate that recognition.