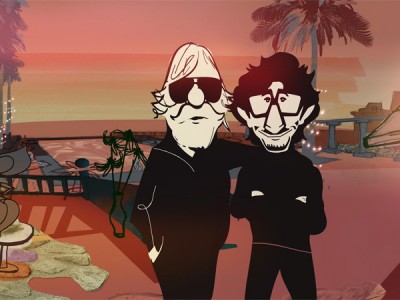 Good documentary films can do a lot of things--educate, inform, immerse us in a scene, tell a story. Richard Goldgewicht's Pablo does those things, and one of my other favorites besides: it wants to tell you all about this amazing guy that you totally should have heard of before now, but probably haven't. Said guy is Pablo Ferro: self-taught animator, comic book artist, advertising creator, and one of the genuine artists of movie title design. If that all sounds too "inside," it's not; this is the story of a creative artist with a unique, idiosyncratic style that changed the game. Who's not fascinated by that?

Ferro, we're told, moved from his native Cuba to New York City at twelve years old, and worked his way up from comic books to TV ads to his ultimate destination: as a title designer of the highest regard. The film's interview subjects, which include directors like Norman Jewison and critics like Leonard Maltin, make clear exactly how important his scenes (and trailers) were for setting the stage of the film; Jewison notes, "You never regarded it as titles. It was Pablo's little film." His best-known credits include Dr. Strangelove, The Thomas Crown Affair, Bullit, Men in Black, and A Clockwork Orange.

In other words, this was a guy who floated through thirty-plus years of Hollywood filmmaking and worked frequently with Stanley Kubrick and Hal Ashby, so yes, he's got some stories. His extended working relationship and longtime off-screen friendship with Ashby, in fact, provides the film's most compelling (and constant) emotional thread.

In his interviews and documentary footage, Ferro comes across as a warm, shambling, unruly kind of guy, a bit of a mess but clearly pleased with himself and his life. Clad in an ever-present red scarf, he's a figure of mischief, and Goldewicht's movie wisely mirrors that disposition. It is narrated by Jeff Bridges in a particularly Dude-ish mood, amplified by his Zen lines, which eschew traditional voice-over tropes and go for something a bit more... abstract. "This is a phone," Bridges intones. "Is it going to ring?" Later: "This is a cloud. Is it going to rain?" Some of it does fill in narrative gaps (always in the present tense--"This is Pablo Ferra discovering cinema," "This is Pablo Ferra splitting the scene," that kinda thing), but it mostly serves to put the film into a properly cockeyed perspective, one matched by the witty construction. We stop for "A Brief Lesson in the History of TV commercials," or, later, "A Brief Lesson in the History of Trailers," and while they're funny little off-ramps, they also turn out to be genuinely compelling in their own right.

As is appropriate to the subject, Goldewicht and his collaborators adopt a mixed-media style, using film, video, stills, and illustrative animation that is exactly the right degree of clever without being cute. It's a smart and stylish picture graphically (which must've been a real concern for the filmmakers), and the organization is sharp, particularly in theå use of a bizarre shooting incident as touchstone. Goldwicht doesn't seem quite sure how to end, and he occasionally gets bogged down in the unhappy personal and family stuff. But those complaints aside, this is bewitching little documentary, a tale relayed with grinning style and wide-eyed enthusiasm.