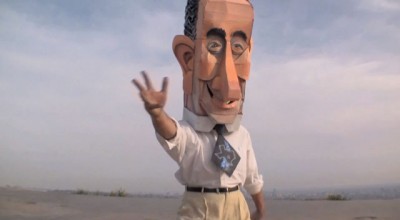 "My name is Wayne White, and I make pictures." So announces the subject of Neil Berekely's documentary Beauty is Embarrassing , but he's selling himself short; he is also a puppeteer, sculptor, cartoonist, art designer, and a pretty mean banjo player. To the oft-given advice to focus on one thing and do it well, he offers a stern "Fuck that!" And as someone who found success in Hollywood, dropped out, and became an artist, he says, "Fuck you, F. Scott Fitzgerald!"

There are "fuck"s a-plenty in White's vernacular; he cheerfully deploys the word not just in conversation but in many of his "word paintings," which have become his trademark works. In them, he takes landscape paintings purchased at thrift stores and paints in incongruent slogans and jokes, from quickies ("Clusterfuck," "Alambama MoFo" "Fanfuckingtastic") to full-on gags ("Good Looking People Having Fun Without You" "I'll Smash This Painting Over Your Fucking Head") to my favorite, "Just Leave the Awards on the Kitchen Table, I'm Back Here Paintin' a Fuckin' Masterpiece."

So, as you can see, he's not a guy who takes himself too seriously, and one of the many pleasures of Berkeley's giddily enjoyable film is the degree to which it works itself onto his wavelength--the style and pace of the film captures (and, at its best, replicates) his dry, disarming wit. A bearded, free-wheeling dude with more than a trace of his Southern accent intact, he went from cartoons and comic books to designing sets and puppets (and voicing some of the latter) for Pee-Wee's Playhouse, a gig which won him three Emmys. Home movies shot behind the scenes of that series, and the twisted puppet shows they'd do to kill time during production, are genuine highlights of the film (least surprising revelation: the minds behind the show enjoyed the occasional joint).

He had trouble replicating that experience elsewhere, however; there were occasional highlights, like his work on the Smashing Pumpkins' "Tonight, Tonight" video, but most of his post-Playhouse gigs were exhausting and depressing, and his experiences trying to pitch projects were best summed up by a later word painting: "All that Fake Laughin' for Nothin'." He said to hell with it, and started painting. And sculpting. And making giant puppets. And parading around in an oversized LBJ head.

Berkeley shot Beauty is Embarrassing over a couple of years, originally intending it as a documentary short, but continuing to come around, he says, because it was just fun to hang out with White. You get a sense of that, in the delight the picture seems to take in its subject. It's a kick to watch him go. The jokey-ness of White's work, and his disarmingly comic persona, have kept him from getting the love his work deserves in the art world, where work that is fun is not "serious," or worthy of serious consideration. (Funny, that prejudice seems to pop up in movies, too.) But they'll come around, and Berkeley's terrific documentary may help get that job done just a little bit quicker.