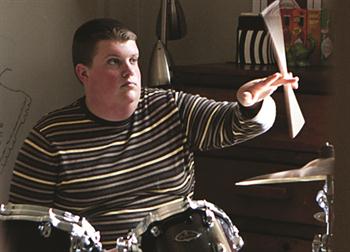 If Matthew Lillard and his agent didn't sit down a couple of years back and strategically decide to "do an Affleck," I'll eat my hat. First, the one-time Shaggy and eternal Freddie Prinze Jr. second banana started popping up in restrained and effective supporting roles in the likes of The Descendants and Trouble with the Curve; now, here is his charming, low-key feature directorial debut, Fat Kid Rules the World. It's a fairly sly piece of work, narratively speaking, inasmuch as you think it's going to be one kind of movie, and it subtly becomes something else. The film's primary flaw is that both are movies you've seen many times before.

The title character is Troy (Jacob Wysocki), an outcast equally miserable at his high school as he is in the home he shares with his ex-Marine father (Billy Campbell) and jock brother (Dylan Arnold). There are vague indications that Troy started packing on the pounds when his mom died. The family is dysfunctional, and Troy is enormously unhappy--so much so that he tries to step out in front of a bus, saved at the last second by Marcus (Matt O'Leary), a burnout kid almost as good with a guitar as he is with conning sympathetic ears out of a few bucks for drugs. His band is fairly big on the local scene, but he's just been kicked out of it, so he goes to work on Troy, insisting that they'd make a dynamite guitar/drum combo. Troy lies a little bit about his drumming skills--he has none. It doesn't seem to matter. Marcus mostly wants someone to hang out with, and to share his love of punk.

As a character, Marcus rings very true; we all knew a guy like this (at least one), who's utterly obnoxious and wildly self-important but has exactly the kind of oozing, infectious confidence that you direly need a dose of at that age. Marcus thinks they can be a band, and has even booked them a gig in a few weeks (which gives the loosey-goosey picture something of a ticking clock). Troy may not believe in himself, but Marcus believes in Troy, and if a transference is possible, they might just pull this off.

Or at least, that's the movie you think they're doing. But in the second half, Marcus's substance abuse problems, which are sort of a throwaway character trait early on, become more apparent--and more debilitating. If there are questions about the fluffy picture's ability to go into this darker territory, they're softened by the skill of the performers; Campbell is particularly good at slowly revealing his seemingly stock character's hidden layers.

And so, interestingly, it becomes a movie not about the fat kid who finds his mojo via music, but about how that kid and his oddball family attach to a seemingly lost cause, and care about him on a deeper level than he can for himself. That's a good idea, even if the execution is somewhat problematic; by the time the big blow-ups and heart-to-hearts arrive in the third act, the picture starts to feel a bit like an AfterSchool Special, albeit one with more edge than usual. (The generic acoustic guitar score doesn't help matters any.)

Still, it's full of authentic touches (it's a movie that knows how people that don't follow music, when asked what type of music they like, reply "All kinds"), and the actors bring much of it off. O'Leary is clearly playing the kind of role Lillard would have done if the film had been made a decade or so ago, and he's got a valuable comic energy that veers nicely into pathos. Campbell is, as mentioned, excellent. And Wysocki, who was so terrific in last year's underseen Terri, finds variations between this character and that one that a lazier actor wouldn't have bothered with. The only problem with his casting is that it recalls that film, and its wildly unpredictable quality--it was anything but formulaic, while this is a film that feels very familiar. But it's so likable, and its ending is such a charmer, that you probably won't mind much.