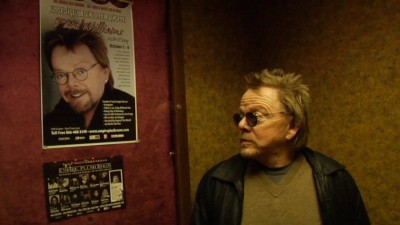 "I always thought he died too young," notes Stephen Kessler mournfully, at the beginning of Paul Williams Still Alive--but it's a fake-out, of course, and not one hidden for long (hell, it's there in the title). Williams, for those not old enough to remember (or who were too high at the time), was one of the most recognizable singer/songwriters of the 1970s. He parlayed his success penning works for Streisand, the Carpenters, David Bowie, and the Muppets into a kind of all-encompassing celebrity, via his appearances in films, on talk shows, and in a seemingly endless series of TV guest shots. And then, in the mid-'80s, his excesses got the better of him. But he didn't die; he got sober, even working with addicts and alcoholics like himself. And he continues to perform, which is where this film comes in.

Writer/director Kessler structures it as a first-person documentary, telling Paul's story through his own exposure to it. It's a risky gambit, but he's an ideal entry point--funny and likable right away, a child of the '70s who grew up with his childhood "friends." When he first sees Williams, at a Canadian celebration of Phantom of the Paradise, he's awestruck: "There he was. It was my friend from the television."

But Williams, as we see, does not immediately take to the idea of the film, and Kessler manages to make his struggle with his subject a compelling part of the film itself. At first, Mr. Williams is a bit of prickly pear: grouchy, closed off, distant. But the more Kessler hangs around, the more Williams opens up to him, and over the course of the two-plus years that Kessler spends accompanying him on trips and shooting backstage at gigs, they get to know each other--with Kessler as audience surrogate.

Structurally, the film is loose and shambling, and even has flashes of genre parody (like Kessler's dramatized idea of how his film could be "one of those PBS documentaries"). But it ultimately adopts something of a parallel chronology, intercutting the triumphs of the past with his present showbiz station. Some of the gigs are a bit on the depressing side, but what's interesting about Williams is that he never seems disappointed by where he's ended up--and he's certainly not looking backwards longingly. Late in the film, Kessler shows him an old tape, in which Williams is guest-hosting Merv Griffin's show and is clearly coked to the gills. Kessler lets that scene run on, past a point of discomfort; Williams watches a lot of it before he's had enough. He can't watch any more--"It's disgusting," he says sadly.

There are a few moments like that, where the loose ends that most filmmakers would have cut out are left in. Another one comes earlier, when Kessler asks, basically, about how far the mighty have fallen. Williams bristles, tells him that the question "feels like a dig that I haven't felt from you before. And I don't like it." When that moment occurs, around the midway point, the viewer winces; Mr. Williams is being a little bitchy. Only later do we truly get our head around what's happening there--that he just doesn't think in the kind of terms Kessler is talking about. Once, he was very successful, but after a while, it was for the wrong reasons: "At some point in my life," he recalls, "I love the attention more than I loved the music." He's now free of that attention, and he can love the music again. Paul Williams Still Alive offers something of a best of both worlds scenario; it slyly inverts the bio-doc tropes, yet also works as the kind of back-from-the-brink-of-obscurity tale that those films tell so well.