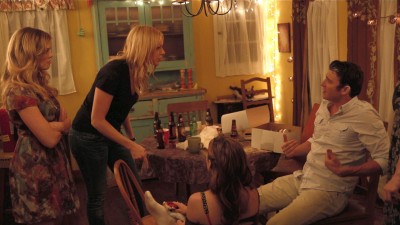 Yes, now that you mention it, the most interesting stuff at a party usually is going on in the kitchen, and that's the clever premise of Ishai Setton's The Kitchen: though set at the thirtieth birthday of Jennifer (Laura Prepon), we never really see the party itself. Revelers are seen arriving and leaving, stopping in on beer runs--and, most importantly, stepping away from the noise of the party proper to talk. Or cry. Or yell. (There's a good bit of yelling.) The kitchen may not be where the party is, but it's where things are happening.

Screenwriter Jim Beggarly throws a lot of characters at us right off the bat, and leaves us to sort them out. There is the birthday girl, whose life is in a bit of flux; she's quit her job at an art gallery to start one of her own, and she's just ended a long-term relationship with the vile Paul (Bryan Greenberg), who's been cheating on her with, it turns out, more than one of her friends. Her birthday bash is planned, painstakingly, by Stan (Matt Bush), who is probably the only one who still thinks his crush on Jennifer is a secret. Jennifer's sister Penny (Dream Walker) is also in attendance, having fooled around with Jennifer's roommate Kenny (Tate Ellington); she's holding a big secret of her own.

Those are just the primary characters--there are several other, peripheral ones, and the most glaring flaw in Beggarly's screenplay is that it's just too busy, working too hard to create an Altmanesque big canvas, but leaving too many of its secondary roles half-developed, or introducing promising characters and then abandoning them (Catherine Reitman's Pam, for example, comes on like gangbusters and then vanishes for the better part of an hour). And while we're willing to grant the concentrated location as vital to the movie's premise, some of it is just too much of a stretch--it's just not believable, for eight or nine different reasons, that Paul and Amanda (Amber Stevens) would do what they do there.

It is, however, a rare picture with more good roles for women than men--even more impressive when considering that it's written and directed by men. But you can also tell it came from the male mind, since Beggarly and Setton fail the Bechdel Test: pretty much every conversation between these women are about men. Ah well, you can't have everything. That complaint aside, the dialogue is snappy and smart, particularly the convincing sibling dynamic and knowing back-and-forth between Prepon, the oft-underused sexpot of That '70s Show, and Dreama Walker, the terrific young actress who made such an impression in Compliance earlier this year. Walker basically takes over the movie, and the movie is better for it; the sharp barbs of her seen-it-all wise-girl help keep the tale from veering into the land of the maudlin.

The Kitchen is wildly uneven, and its ending is so rushed as to feel like the best that could be done under a tight deadline. But this kind of character-based comedy/drama is harder than it looks, and, its minor bugaboos aside, The Kitchen is often entertaining and occasionally engaging, particularly when taking advantage of its gifted young cast.