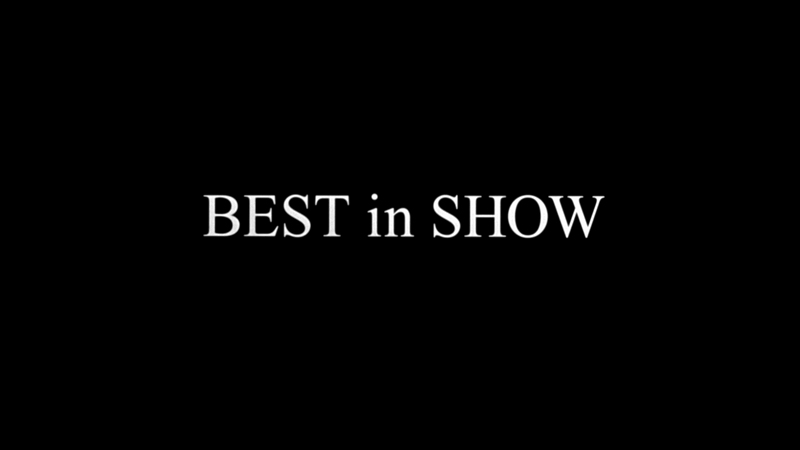 
The Movie
It was late one night in college when Ricky Roxburgh changed my life. As we were hanging with friends in a dorm room, he produced a pair of VHS tapes I had never seen before. One was Clerks, which would introduce me to Kevin Smith, the writer/director I would grow to idolize as a fellow hockey-loving, Prince-enjoying chronicler of suburban life. The other, Waiting for Guffman, reconnected me with a longtime favorite, Christopher Guest, star of This is Spinal Tap. This was something different though, as the oddball characters of Blaine, Missouri were something special, thanks to Guest taking you into this world (via perfectly paced interviews, still-photo cutaways and camera movements) and making the unusual feel very real.

It would be a few years before we'd hear again from Guest, but the wait was well worth it, since the result was Best in Show, another visit with a strange assortment of everyday people, this time centered around the Mayflower Kennel Club Dog Show. As we meet the handlers, most neatly organized in couples, we learn their peculiar particulars, before eventually making our way to the actual competition, though to be honest, the show is almost superfluous, as it's the characters and their personalities away from the ring that make this film so wonderful. (Plus, when you have a film about a competition, you kind of know one of the featured players is going to walk away with the title.) 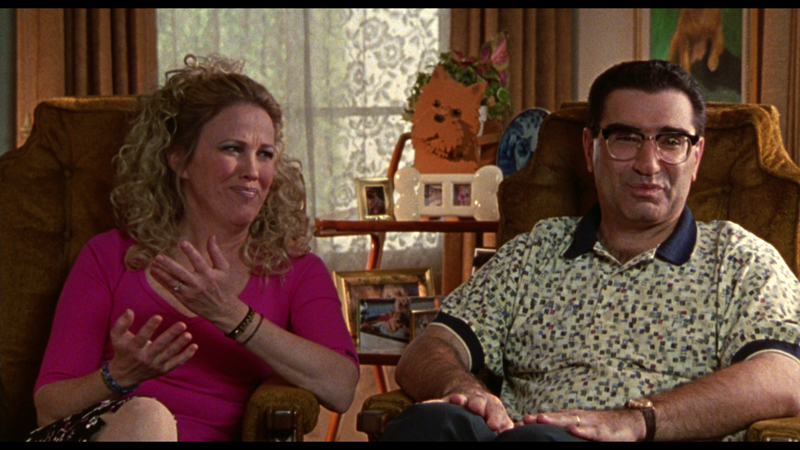 Our heroes are the Flecks, Gerry (Eugene Levy) and Cookie (Catherine O'Hara), Floridians hoping to parlay some local wins by their Terrier Winky into victory on the big stage, despite not being able to afford to compete against the pros. Guest has become a master at telling the stories of obsessive, small-time dreamers, and these two are no different. Levy's wonderful at playing a man adrift in his own life, watching helplessly as men recount tales of his wife's active sexual past, while Cookie keeps one foot in her dog-showing present and one in her slutty past, making for some very uncomfortable moments, none less awkward than their road trip stop-over at the Ohio home of one of her exes (the great Larry Miller) that ends in one of the funniest bits of negotiation ever captured on film.

The rest of the group is made up of a pair of uptight yuppie lawyers (Parker Posey and Michael Hitchcock). a gay couple (Michael McKean and John Michael Higgins), a country guy named Harlan (Guest) and his bloodhound, and a gold digger (Jennifer Coolidge) and her dog trainer (Jane Lynch.) With Higgins, Posey and Coolidge leading the way, it's a dream cast for a comedy (supported by a number of other talented performers, including Ed Begley, Jr., Bob Balaban and Don Lake) and because of the depth of the roster, there's barely a moment that goes by without a laugh. But if anyone gets the MVP award, it's got to be Fred Willard, who's paired with Jim Piddock as a former athlete with no knowledge of dogs doing commentary on a dog show. Willard is usually quite funny, but his portrayal of ignorance here is near brilliance, delivering some of the film's most memorable lines, including a quick throwaway about the flavor of a judge. Hell, if Willard started doing commentary on actual dog shows I would definitely watch.

Williard's performance is an example of just what makes this film so great, as it's incredibly quotable. Pretty much every scene is loaded with lines that you'll be repeating for just about the rest of your life. If you've never seen the film, I won't ruin them for you, but Posey's hotel-room freak-out on Begley, Jr. is incredible, Guest's run about naming nuts is fascinatingly banal and Coolidge's list of things she has in common with her decrepit husband is spit-take worthy. Yet despite how perfect the lines are, they come off as completely natural for the moments, proving how well improv can work when it's handled well (which is pretty rare most of the time.) 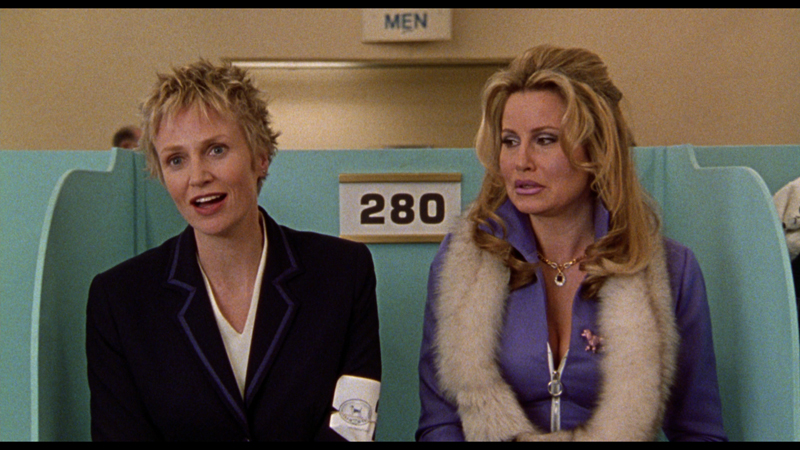 The Disc
A one-disc release, this film arrives in a standard Blu-Ray keepcase, and features a static menu standard for WB releases (though the arena announcement has been maintained.) You have options to watch the film, select scenes, adjust languages and check out the extras. Audio options include English DTS-HD Master Audio 5.1 and Spanish Dolby Digital 5.1 (Castilian) and Dolby Digital 2.0 (Latin,) while subtitles are available in English SDH, French and Spanish.

The Quality
Popping this disc in, I expected more from the 1080p. AVC-encoded transfer, but that's not the way the film was made, so adjust your approach appropriately. What you do get is a decent amount of fine detail (the fur on the dogs looks sharp) and appropriate colors, though exterior shots are markedly softer than footage shot indoors. You'll likely notice some noise in large areas of flat color, but the dirt/damage that was obvious on the DVD is missing here. With no notable issues with digital artifacts, the overall presentation is solid considering its source.

The best thing you can say for the DTS-HD Master Audio 5.1 track on this disc is it aids the film's authenticity as a documentary, as there's not much more to it than the dialogue you're getting front and center. There's basically no score to the film, sound effects are presented on the same plane as the dialogue, and there's nothing dynamic about the mix. On the plus side, everything is clear and legible, and every joke lands clean.

The Extras
The extras available on the DVD have thankfully ported over the Blu-Ray, but nothing's been added. The bonus content starts with a feature-length audio commentary with Guest and Levy, who co-wrote the outline the actors used in their improv. With two very funny guys behind the mics you'd expect a more energetic track, but the pair sticks to the facts, sharing behind-the-scenes production stories and details you wouldn't know from watching the film. while also discussing the performers and material that was excised from the film.

Speaking of which, over 30 minutes of deleted scenes (presented unfortunately in standard definition) are included here, with optional commentary by Guest and Levy (though these appearances are brief and don't add a great deal to the presentation.) There's some fun stuff available here, including more of Scott and Stefan and a lot more of Harlan, for Guest fans feeling short-changed by his relatively limited presence in the movie. 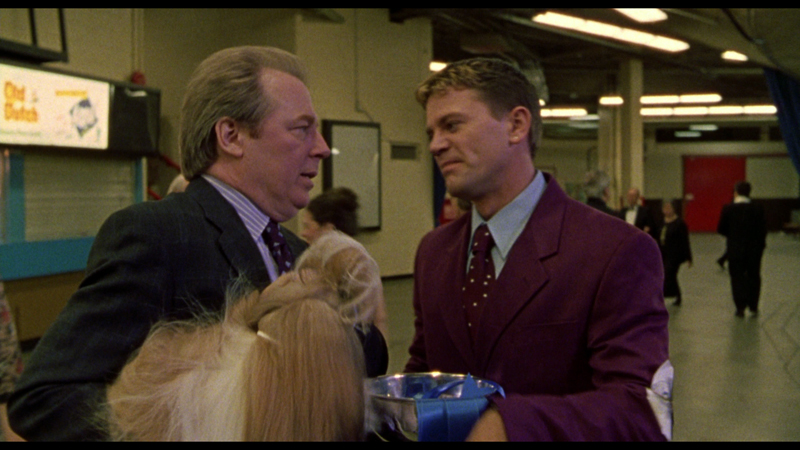 The Bottom Line
Best in Show was a fitting follow-up to Guest's fantastic Waiting for Guffman, and if not for that film boasting a character like Corky St. Claire, it would probably be his best film. That said, Best in Show is just barely in second place, more than capable of making you laugh for a solid 90 minutes. Finally released on Blu-Ray 12 years after it arrived on DVD, the movie doesn't look or sound dramatically better than the DVD release, but at least it keeps the same extras. If you never owned the original disc though, this is a no-brainer for comedy fans.