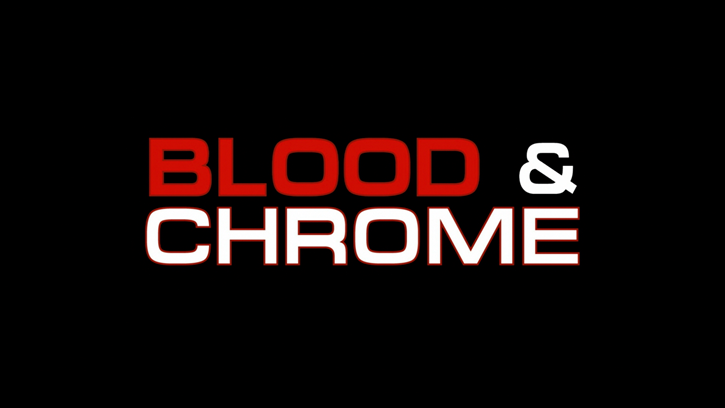 Battlestar Galactica: Blood and Chrome is a spin-off/prequel to the popular Battlestar Galactica television series. It takes place before the last stand in the Cylon war: here is a story of the start to the war and the introduction to a young William Adama (Luke Pasqualino), who is just now starting out as a young pilot who works as a fighter for the people during the war beginnings.

This production was filmed as a television pilot but it was passed on by the SyFy network and it has now ended up becoming a standalone feature film that goes back to the beginning roots of the epic confrontation between humans and Cylons. The storyline is simple: Adama is a new pilot who is working to try and fight the Cylons in his early roots. He meets his co-pilot, the officer Coker (Ben Cotton) and with the help of a mysterious additional flight attendee (Lili Bordan) they set off to fight the Cylons in an escort mission that goes awry.

With the Cylon attacking and more danger underway, they crash-land on a mysterious ice-frozen planet to continue the mission assigned to them. The question remains: What is the mission? Adama and Coker are left out of the loop and the only one who might have a clue is their mysterious partner who knows more about what is going on with their dangerous mission. 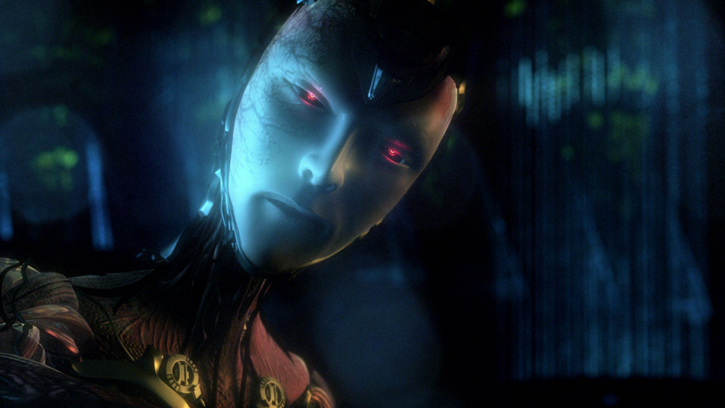 Unfortunately, the storyline unfolds in such a way that viewers are more likely to be bored out of their minds while watching this than they are to be intrigued about the possibility of getting more answers or stories with these characters. The writing is atrocious on several levels. There isn't any shred of character development to be found. The writers simply assume that everyone will be familiar with the characters from Battlestar Galactica and that they can introduce new characters without establishing any reason for us to care about them. Longtime fans (which is essentially the target audience) will not be pleased with this. Viewers without any shred of familiarity will be even more baffled and confused.

Battlestar Galactica: Blood and Chrome fails to live up to any of its potential even despite having an exorbitant five writers (David Eick, Glen A. Larson, Michael Taylor, Bradley Thompson, David Weddle) who worked on crafting the story outline for the production. Everything about the writing fails and falls flat. It's too bad, really,  but none of the characters are given a shred of a backing. Characters are treated as stock background props to propel sequences forward. After all, characters don't need to be developed much if all you plan to do is kill them off. Many characters that are introduced appear to be dead almost as soon as they have a few lines to say.

Only the "leading" actors Luke Pasqualino and Ben Cotton survive the entire ordeal while seeming to be established as main series characters. There are a few minor supporting roles that become established (and not all of them actually die) but they seem like characters meant essentially to prop up the show from having only two leading actors. There is a massively different contrast in this approach to the effort taken by Ron Moore in creating his series: Battlestar Galactica's mini-series premiere was carefully calculated to introduce several characters that would be regulars on the show while actually giving an audience a good foundation for caring about the ensemble cast.

Luke Pasqualino is an absurdly awful actor in this role and for a number of reasons this performance brings the series to a screeching halt in entertainment time and time again. Pasqualino presents his rendition of the character as a weak, overly confident, and silly individual who has no clear understanding of the war he is involved in with the Cylons. Surprisingly, this does have more to do with his poor acting than with the screenplay. I frequently wondered why he seemed so smug while speaking lines of decent intrigue. I disapprove of the weak-writing, but when the lead actor can't even speak lines seemingly important to the show with a sense of conviction it makes me lose interest.

I wondered why Pasqualino was cast in the lead role while watching this and I still, fundamentally, don't understand how it happened. It begins with his physical appearance resembling little of Edward James Olmos. It extends to the fact that Pasqualino seems so uninteresting as an actor that he could have never carried a show as the lead actor. He is generally stiff and rigid in his acting. In one pivotal scene where a character seems to be approaching death he extends his arms outwardly in a rigid motion that looks like a kid pretending to act and not as someone who actually cares at all about the character that's profusely bleeding on the ground.  (Note: I have included a screenshot below of this hilariously performed moment to give you an example of Pasqualino's awful acting skills.) 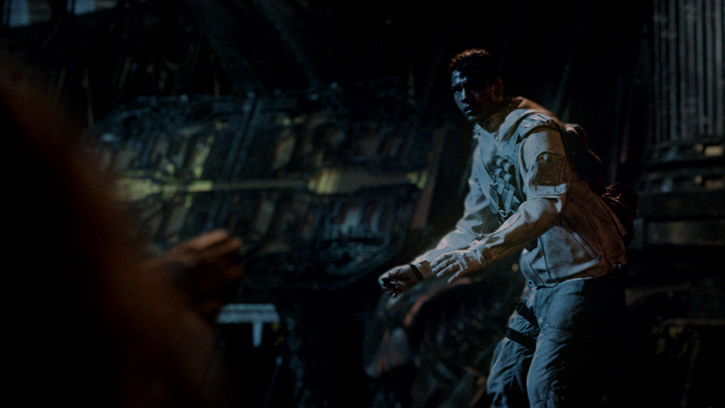 Ben Cotton is almost as awful as an actor, though. His character is introduced as a drunk, menacing, and crude individual and he doesn't appear much nicer at all over the course of the episode. Cotton is unconvincing at playing this type of character and he also seems to be play-acting. He is never really convincing as an actor in this role and his performance feels like something out of a bad television production "movie-of-the-week" on the SyFy channel. Oh, wait...

Cotton tries to get a comedic response and does so repeatedly through his performance. He grins, smiling, and playfully acts as if he's the coolest character on the show. He does this with weird mannerisms and movements meant to convey how "cool" he is but we know nothing about the character besides the fact that he has a drinking problem and is obnoxious and loud. It's a sign of bad character development on both the part of the writers and of the underwhelming performance by Cotton.

Beyond the terrible acting and writing we have the awful special effects. The CGI is overkill and too many scenes are apparently designed to look like scenes from a video game. It's the kind of over-the-top CGI expected of late-night fodder and not something remotely intriguing and beyond the realm of bad b-movie ridiculousness.

In an awful sequence of particular note a giant alien snake on the snowy planet the characters crash-land upon attacks the characters. This snake is terribly designed by the special effects team. Simply put, it's laughable how badly designed it was. As if this special effects team was determined to make matters worse during the feature, they inserted poorly designed and obviously digitally rendered lens-flare throughout many moments. Fanboys who complain about experiencing an abundance of lens-flare in the efforts of J.J. Abrams clearly haven't seen something as terrible as Blood and Chrome. Of course, how could they have? This was an abysmally produced pilot to a series that never got picked up. It should never have been released at all.

I know a lot of fans will want to blame network executives for not picking this up as a series and for not giving it a "fair chance" but it's just disappointing through-and-through and the decision makes a good degree of sense when considering the quality of the pilot. Something that misses every opportunity for decent creativity will only serve to make science fiction seem even more inaccessible to the mainstream at large. Everyone involved in this production probably felt that making a Battlestar Galactica themed series would guarantee a series order and a fanbase that was already established with built-in viewers. That sort of thing rarely happens when creating something that reeks of unoriginality and ambition is the result of the efforts made behind the scenes.

Battlestar Galactica: Blood and Chrome doesn't work as a pilot to a new series and it doesn't work as a standalone film. It feels like stale leftovers that should have just been left on SyFy's cutting-room floor. It disappoints and it's actually easy to see why this wasn't given a series greenlight. Even newcomers would not have considered this good enough to be given a series order. Battlestar Galactica: Blood and Chrome is both an example of terrible filmmaking and of what not to do when trying to revitalize a solid and previously successful franchise. 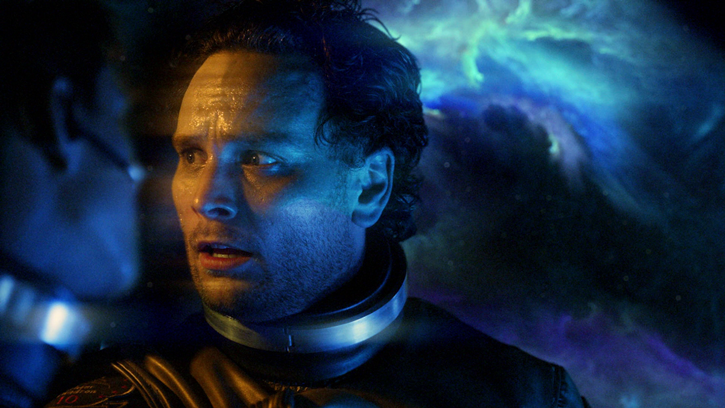 Battlestar Galactica: Blood and Chrome arrives on Blu-ray with a 1080p High Definition video presentation that preserves the aspect ratio of 1.78:1. The picture quality is a bit unusual to try and rate in comparison to many film releases. The way the film was edited and worked on as done during post-production lends the film a style that makes the film look highly unusual. There's a lot of post-production work that impacts the image quality.

Grain is added as is stylistic flairs that make the film look older and more in line with the unique style of the television series while at the same time helping to minimize some of the flaws with the production's special effects. The good news is that the image is definitely stable and with solidly impressive contrast and color depth. Black levels are a little weak but this is a mostly successful presentation that is pleasing to behold.

The audio presentation is immersive with a 5.1 DTS-HD Master Audio presentation that has good bass, a decent use of the surrounds, and largely crystal clear audio for dialogue and for music. The track doesn't sound even remotely like what you might expect from a television production - let alone for a pilot episode. The many moments of explosions, hyperspeed flying, and rattling gunfire in action-scenes is intense and electrifying with this sound mix. 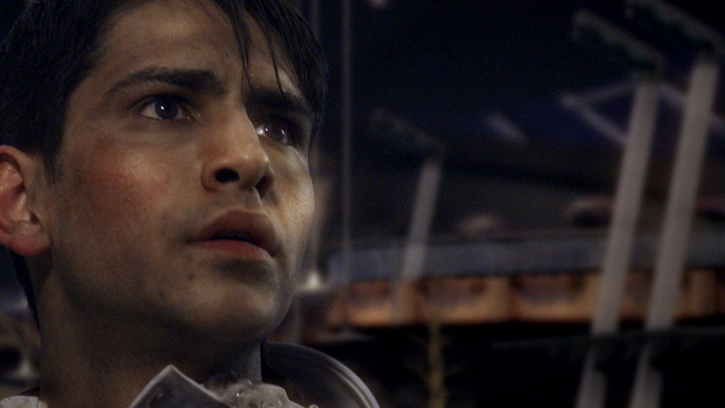 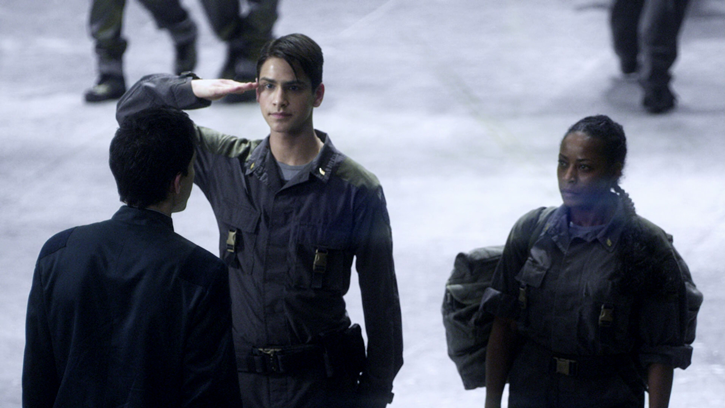 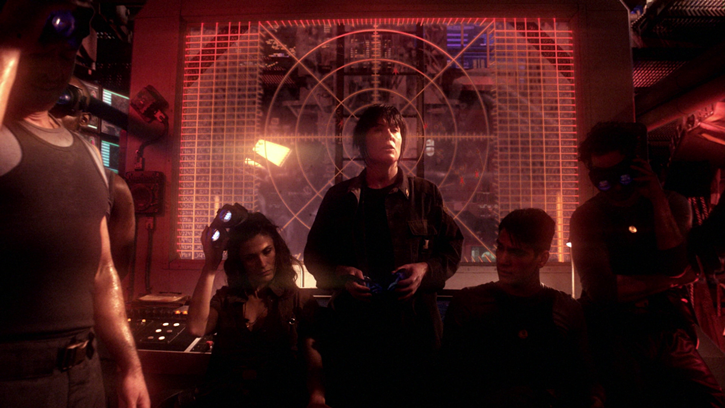 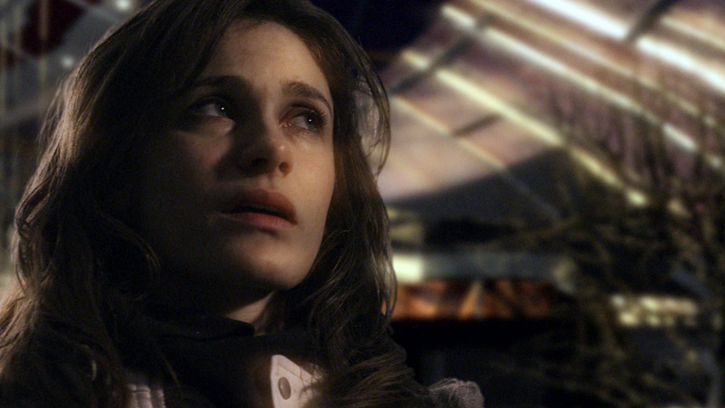 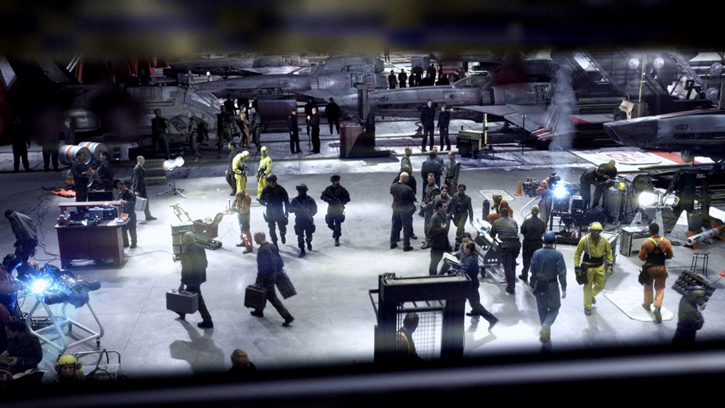 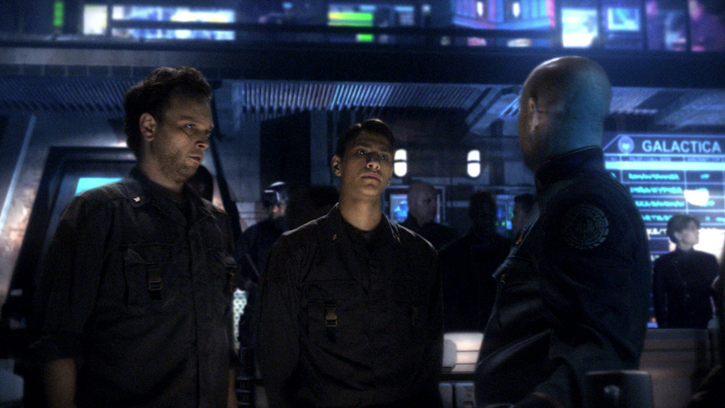 Supplements are presented in High Definition.

The only extras included on this Blu-ray release are thirteen scenes deleted from the pilot or trimmed down to fit a television run-time and a featurette on the making of the episode's special effects. All told, this equals to being about fifty minutes of supplemental material. However, it's not exactly fascinating inclusions that were provided here. The deleted material is unfinished (with no special effects work) and the featurette doesn't work as a general making-of featurette so it won't be of interest to many bonus feature viewers hoping for something well-rounded. 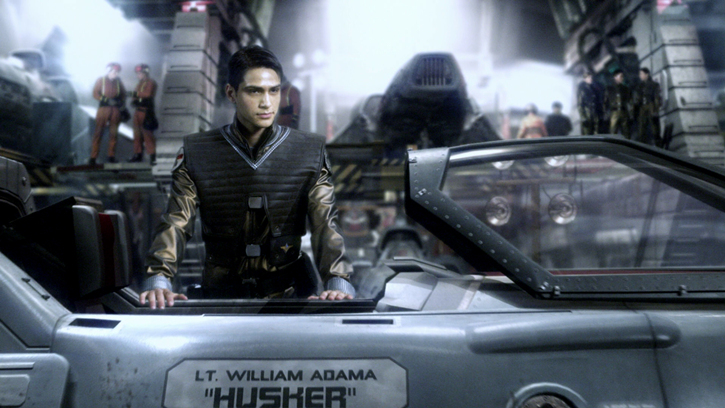 While the technical presentation of the Blu-ray is indeed strong, the lack of a good film and a low number of supplements (especially for a Battlestar Galactica release) makes this Blu-ray something that I suggest skipping altogether (especially for fans who aren't interested in seeing something that only "could-have-been" used as a pilot episode for a series that never actually made it into production).