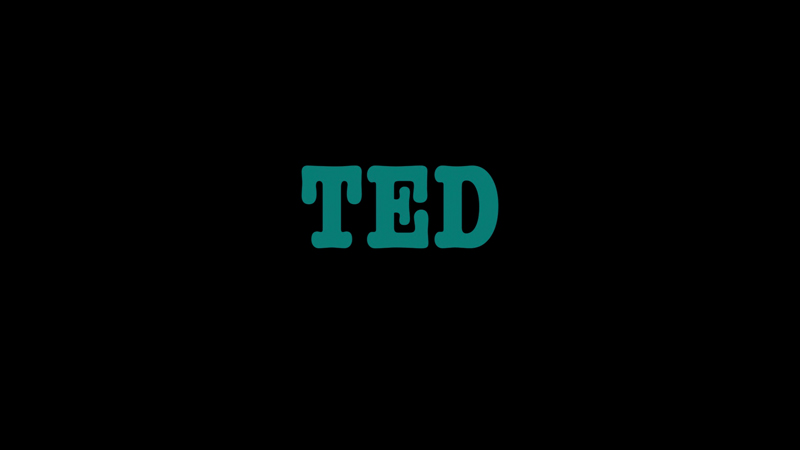 
The Movie
There's a large contingent out there with a searing hate for Seth MacFarlane. The guy comes off a bit cocky, has built his career off a simplistic, crude and controversial style of comedy and has flirted with overexposure having made up a large percentage of FOX's prime-time line-up, despite rarely actually showing his face. However, he's also a pretty gifted entertainer, a seemingly tireless worker, boasts a love of and actively supports the history of entertainment and inspires tremendous loyalty in those he works with. So it's not hard to put those who bash him in the "jealous" category, even if his flagship series is often worthy of heavy criticism for its lazy and formulaic comedy.

Thus, when he steps outside of his comfort zone, like when he hosted Saturday Night Live, it shows him to be a bit more than just an un-PC animator. That's exactly the opportunity he was provided with in Ted, where he served as co-writer and director, and gave voice to the lead character, a living, breathing teddy bear. But when given the reins to living, breathing actors, he essentially placed them into the cartoon universe he's so accustomed to, utilizing similar flashbacks, un-PC gags and even some characters, while bringing along many of the same voices and writers from his series (including the great Patrick Stewart as narrator, and parts for, among others, Alex Borstein, Patrick Warburton and Ralph Garman.) The result is a movie that feels very much like a live-action extension of Family Guy, with special guest star Mark Wahlberg.

Wahlberg plays John, a regular guy who, when he was a kid, wished for his toy teddy bear to be his real best friend, only to have that wish granted. Now alive, Ted becomes an overnight celebrity, only to see the spotlight eventually fade, allowing him to settle into a comfortable pot-haze with John and his higher-achieving girlfriend Lori (Mila Kunis.) Unfortunately for her, John's never really grown up, and she wants him to be more mature, including giving up his teddy bear, a change neither John nor Ted are willing to embrace, though they will give it a try. A half-hearted try, fueled by drugs, white-trash sex and Flash Gordon (including Sam Jones himself, in an entertainingly meta bit of silly pop-culture referencing.) 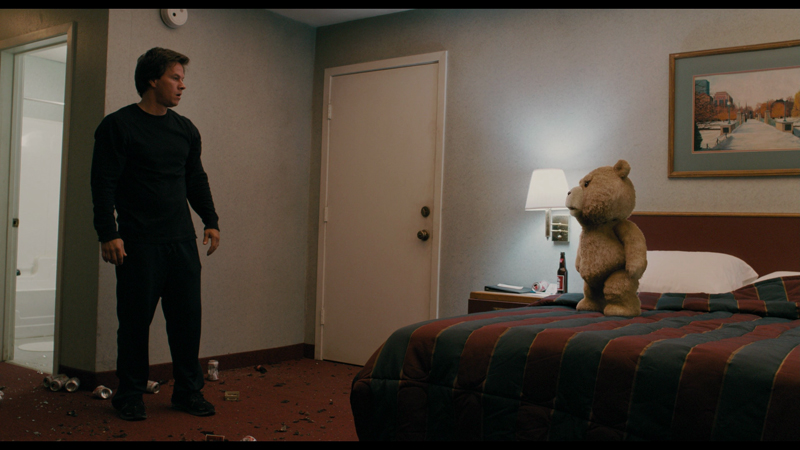 While John and Ted cope with Lori's expectations for a mature, bear-free relationship, two side stories attempted to expand the plot a bit, as Lori deals with her predatory boss Rex (Joel McHale) and Ted is pursued by a long-time fan named Donny (Giovanni Ribisi.) Both give John a slight something to worry about, which gives Wahlberg a bit more to do than be eternally mellow, but it's Ribisi who delivers an iconically creepy performance that indicates he may have a Jame Gumb-like role in his future. McHale on the other hand is his usually smooth, yet subcutaneously awkward self, existing mainly as a foil to advance the John-Lori relationship (much like the very odd cameo by Norah Jones.)

When not relying on having dirty dialogue coming out of an adorable face, much of the comedy in the film is right out of MacFarlane's Family Guy playbook, including the obnoxious use of familiarity in the place of a joke. This is most obvious in a remake of the disco dancing scene from Airplane, to which nothing was added (in fact, some details were left out) making it a trifecta of Family Guy tropes, serving as a flashback, a pop-culture reference and a lazy lift. It would have been amusing to watch this scene with an audience made up of MacFarlane's younger fans to see if they even understood what was happening.

However, MacFarlane managed a coup by getting Wahlberg, whose charisma is undeniable, even through a cloud of smoke. If anyone could make you believe in a Boston schlub with an impossibly hot girlfriend and a magically-alive teddy bear, it's Wahlberg, who works his own magic in a one-man fist-fight with the bear and an energetic cocaine binge that's a spiritual sequel to Boogie Nights, while he gets the single funniest line in the movie thanks to his honest delivery. With anyone else in the lead, this easily could have been an unbearable retread of MacFarlane's animated work. Unfortunately for him, you can't just fade to black after 22 minutes of raunchy jokes in the movie theater, so after almost two hours, MacFarlane turns to treacly schmaltz to put a bow on the whole affair, and almost gets away with it, again thanks to Wahlberg.

Unsurprisingly, considering MacFarlane's background, where the film succeeds most is in the animation, as the button-eyed Ted is one of the most impressive examples of CG/live-action integrations in recent memory. Part of it is the way MacFarlane performed the motion-capture for the character, acting on-set alongside his cast to create a more natural interaction, but the way the character moves and fits in with the real-world is nearly perfect, with just a few frames during the fast-paced fight with Wahlberg betraying the effect. It would be interesting to see if someone could get MacFarlane to agree to a Dogme 95-type pact where he could do what he wants as long as he doesn't include a flashback, a pop-culture reference or work with any of his Family Guy collaborators. If his fun SNL appearance was a hint and this movie a warning, it could result in something special.

The blu-ray includes an unrated version is addition to the theatrical cut, though the changes aren't very dramatic, including an overly obvious oral sex joke, some unnecessary Japanese misogyny, a look at the origin of Donny, more perversion from Rex, a weak Virginia Tech joke and a DVD bonus content joke that doesn't land as well as the one in the final film. None of it was that great, and outside the oral sex gag, none of it was of a truly unrated nature. 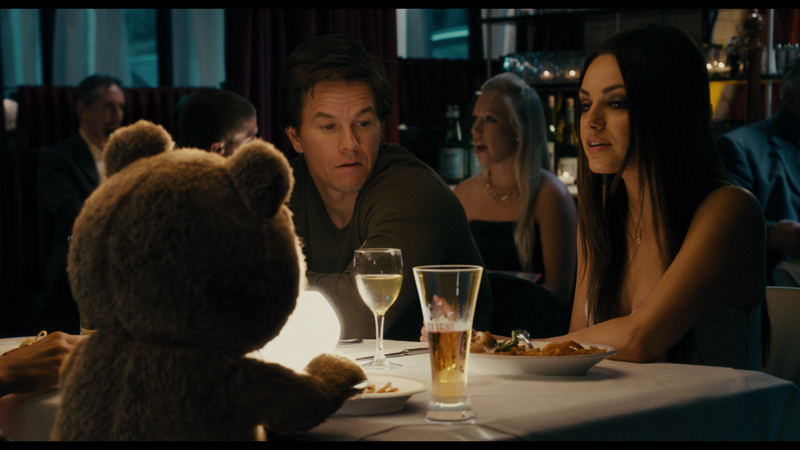 The Discs
The film arrives in a two-disc set, with a Blu-Ray disc and a DVD, packed in a standard-width, dual-hubbed Blu-Ray keepcase with an embossed slipcover. The blu-ray features the usual Universal menu, with options to watch the film, select scenes, adjust the set-up and check out the extras. Audio options include English DTS-HD Master Audio 5.1 and Dolby Digital 2.0 DVS tracks, along with Spanish and French 5.1 DTS Digital Surround tracks, while subtitles are available in English SDH, French and Spanish.

The Quality
The 1080p, AVC-encoded 1.85:1 transfer on this disc lets the mostly direct-to-digital footage shine (a few select scenes were shot on film) with a very crisp and detailed image that boasts deep black levels, high levels of fine detail and appropriate color and fleshtones, whether during the darker night scenes or at any other point. Lighting is natural throughout, without any offending bright reds to be noticed, while the film looks like a movie, with good grain, but no obvious issues with compression artifacts. Despite the overall clarity, the CG Ted doesn't stand out as obvious most of the time, with one minor exception during a high-tempo brawl.

For the most part, Ted is strongly dialogue-driven, and as a result, a lot of the action takes place in the center channel, but when the movie calls for a more involved delivery, the mix brings it, offering some nice dynamic movement and atmospheric effects (with the party and action scenes getting the bulk of this treatment.) However, the surround track also lets you appreciate the score by MacFarlane favorite Walter Murphy, which is a truly classic movie comedy score, like a Mancini or a Bernstein, building off a main theme to create tone-appropriate variations that tie the film together well.

The Extras
Kicking things off is a light, entertaining audio commentary with MacFarlane, Wahlberg and co-writer Alec Sulkin. Well, it's more like a commentary with MacFarlane and Sulkin, with Wahlberg stopping in to say hi, as he has to leave after 24 minutes. MacFarlane does a lot of pointing out the actors' names (with one unfortunate exception), talks about some of the controversy around the film and provides some technical details, including an interesting bit about the difficulty of doing slow-motion with digital cameras. It's also amusing to hear him dance around what seems to have been a rule he was given to not disparage anyone. Considering MacFarlane's been M.I.A. on the commentaries on his series, it's nice to hear from him once again.

During the commentary, MacFarlane mentions several scenes that were cut from the film, and you can see many of them in the 16 deleted scenes that are included, which run 14:54. Some of them include renders of Ted, some would have dramatically dragged the film down and one involving McHale will haunt you when you close your eyes.

Having MacFarlane acting as Ted on-set, while still being animated let the film play with line readings, so there were plenty of alternate takes on some jokes, with 10:32 of them included here. What's nice is, the producers used the opportunity to show some of the various stages of animation while sharing the alternate jokes. Not a lot here deserved to be in the final film, but they are worth a look. The same goes for the gag reel (6:24) which is moderately funny, though it's entertaining to see how the way Wahlberg says "bear" consistently breaks Kunis.

The final extra is a quality look behind the scenes in the three-part, 24:42 "Ted: The Making of." This featurette covers the development of the story and the design, including footage of the testing done to get the bear just right and lots of info on the motion-capture system used by MacFarlane, as well as a bit about the communications technology utilized by the American filmmakers to collaborate with the Australian animation house doing a lot of the work on the film. There's also a focus on how things went on the set, since this was MacFarlane's first feature film and first major live-action directing job. Combined with the commentary, it gives a pretty full view of how the film came together.

Also included in the set are an Ultraviolet stream/download of the film and a digital copy. 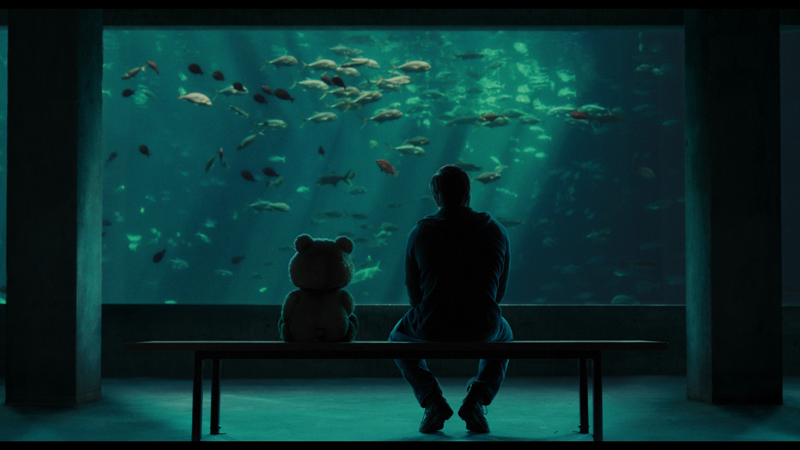 The Bottom Line
Though Ted does offer a few genuine laughs (mostly thanks to Wahlberg's good-guy persona) it's mostly a movie version of the sense of humor MacFarlane became famous doing on Family Guy, right down to some very similar characters and gags. What's most impressive, aside from Wahlberg's reliably good performance and Murphy's classic score, is the effects achievement that the titular bear represents, for which MacFarlane deserves a lot of credit. The blu-ray looks and sounds great, and offers a decent spread of bonus content, extending your enjoyment if the movie tickles your fancy. This is an easy film to recommend for MacFarlane's fan base, as it delivers just the experience they're hoping for and expecting.