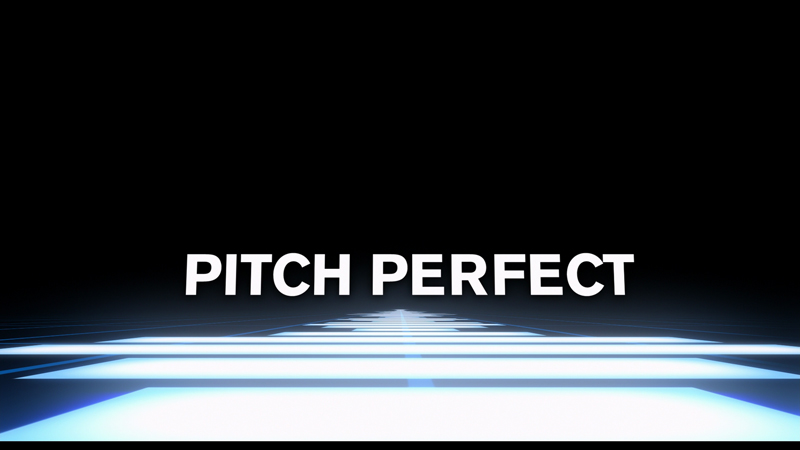 
The Movie
As big as American Idol and the myriad singing competitions on TV have been, it doesn't seem like the mainstream audience really likes the actual sound of the human voice. After all, The Sing-Off, which pitted several a cappella groups against each other, in a pure singing battle, voice against voice, made it through just two seasons before taking a bow. A cappella exists in something of a popularity limbo, viewed mostly as a novelty, though most people will enjoy it when they hear it performed well. Just take a look at the response to the Warblers on Glee, a breath of fresh air injected into the show's formulaic musical content.

So as Glee winds its way through a cast transition with more karaoke than creativity, the void for some musical fun sat unfilled until Pitch Perfect, directed by Avenue Q's Jason Moore, arrived like a mouth-created sonic boom. The film follows a mildly sullen college freshman named Beca (Anna Kendrick), whose only interest is her music re-mixing, mashing together songs on her laptop and living in the world between the cups of her oversized DJ headphones. Her father wants her to live a college life though, and encourages her to join a student group to meet some friends. The group she ends up with are the Bellas, an a cappella singing group recouping from a massive embarrassment the previous semester that's left them scrambling for members.

The group is led by the uber-controlling Aubrey (Anna Camp), who instantly clashes with the independent-minded Beca, but that's not their only problem. In filling out the roster, the Bellas' choices epitomize the idea of the rag-tag underdogs, from overweight dynamo Fat Amy (Rebel Wilson) to nymphomaniac Stacie (Project X' Alexis Knapp) to nearly-mute Lilly (Hana Mae Lee.) Though the raw ability is there, they're going to need some work. Unfortunately, Aubrey and her second-in-command Chloe (Brittany Snow) have a hard time forcing their old-school style onto Beca and the other new recruits, and time is running out before the big competitions Aubrey refuses to lose. 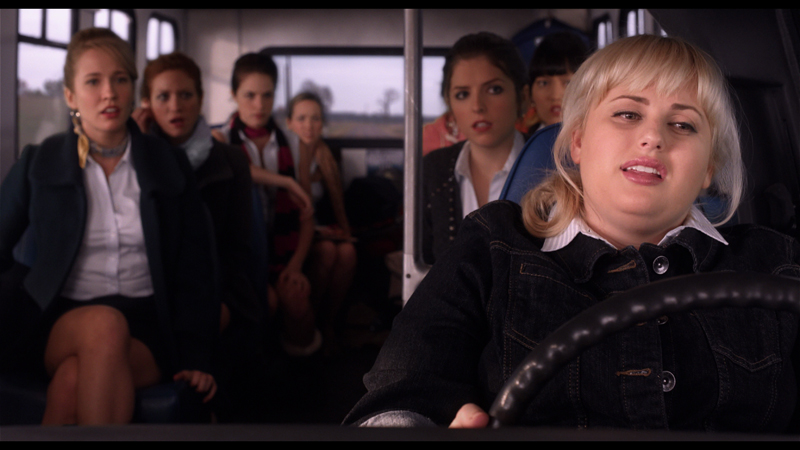 While the competitions give the film motivation and a timeline to build on, the story is more about the gelling team, their gender-flavored rivalry with the school's top squad, the Treblemakers; and Beca's antagonistic relationship with Jesse (Skylar Astin), a charming new member of the opposition. Along the way, the film does a great job of spreading the spotlight around, highlighting many of the singers, as well as Jesse's pal Benji (Ben Platt), a hang-dog wannabe with a taste for magic. There's plenty of space to play, as the film checks in just shy of two hours, but despite the length and the wealth of characters introduced (including John Michael Higgins and producer Elizabeth Banks as wacky TV commentators) the film flies by, with Moore smoothly pacing things via several enthusiastic and smile-inducing musical performances and some funny set pieces, marked by an underlying sense of surrealism, betraying screenwriter Kay Cannon's 30 Rock roots.

The performances of much of the cast are eye-opening, whether you're new to their talent or not, starting with Kendrick, who dominates the screen consistently, playing it coy and vulnerable, but with a playful intensity under the surface. As her partner in crime, Astin comes off a bit like Darren Criss crossed with Dane Cook, and it works to give her a competitor you can still like. In fact, all the guys focused on in the Treblemakers, including their hugely douchey leader, played by Adam Devine (Workaholics,) are fun to spend time with. It was a risky move making the "bad guys" so likeable, because it lowered the stakes a bit. I you don't care who wins, why care about the competition?

Well, you can still root for the heroes, and of course, the girls are the stars of the show, and that's where the truly breakthrough performances in this film can be found. Until this point, I viewed Rebel Wilson as simply the Australian Melissa McCarthy, which, despite the acclaim the Mike & Molly star receives, is not a honor in my book. More than just a fat chick acting dirty or goofy, Wilson has legitimate comedy chops, nailing every line and run with perfect timing. Meanwhile, in the thankless job of the mean girl, Camp is like a less-manic, yet still funny Kristen Wiig, with her sidekick Snow bringing a sassy sweetness to the screen as Chloe. Surprisingly, pretty much every one of the 10 Bellas is memorable (sorry, blond one), but Lee's ridiculous facial expressions and delivery and Knapp's silly, confident and almost uncontrollable sensuality will definitely stick with you. And even if the ladies weren't so good at earning laughs, the fact that they performed their own singing would be more than enough to be impressive.

Speaking of singing, that's the reason we're following the Bellas, and there's no disappointment here, as the movie is loaded with some of the catchiest, most exciting a cappella arrangements and performances ever, from both of the core groups. Keying off Beca's mash-ups, there's a lot of blending of songs that result in fantastic numbers, like a thrilling multi-crew "riff-off" and the two big finales. The Bellas' climactic performance is simply a show-stopper, loaded with crowd-pleasing joy, including the freshest take on Simply Red since the band first formed and the finest channeling of Dusty Springfield ever. Without any exaggeration, while writing this review, I rewatched the final performance probably 30 to 40 times. It gives the same feeling of exhilaration as the first time "Don't Stop Believin'" was performed in the pilot of Glee. 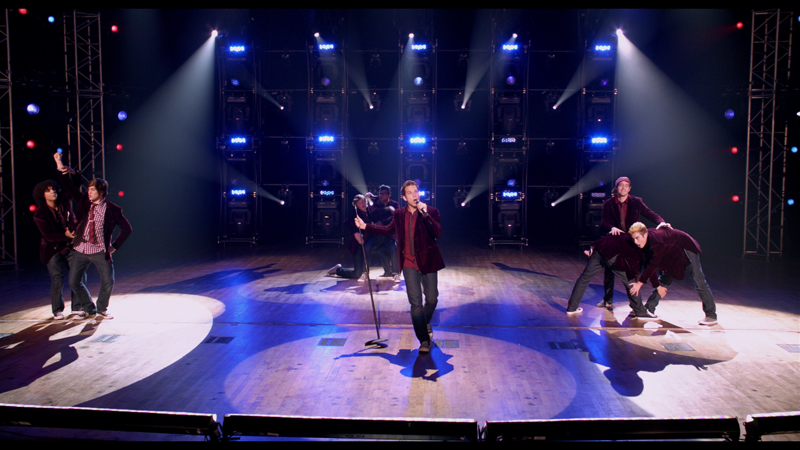 The Discs
The film arrives in a two-disc set, with a Blu-Ray and DVD, packed in a standard-width, dual-hubbed Blu-Ray keepcase, with a foil-embossed slipcover that repeats the cover art. The Blu-ray features the standard Universal curved menu design, with options to watch the film, select scenes, adjust the set-up and check out the extras. Audio options include English and Frencg DTS-HD Master Audio 5.1 tracks and a DVS 2.0 track, while subtitles are available in English SDH, Spanish and French.

The Quality
The 1.85:1 1080p, AVC-encoded transfer is gorgeous capturing the film's many looks well, presenting the film's colors appropriately and maintaining skintones without issue. The film takes place in a variety of settings, including several exterior night scenes and a number of theatrically-lit stage performances, and they look great, offering up nice deep black levels, excellent detail (take a look at the all the individual strands of flowing hair in the finale and the Treblemakers' velvet jackets' texture) and a lack of digital distractions. The only thing that's remotely an issue happens during the finale, where there seems to be a touch of digital reframing on one shot. It's very odd, and may not be an issue for some, but it kept jumping out to me.

Like the feel of the musical moments, the sound mix here is exuberant, taking full advantage of the surround speakers to fill the room with a cappella presence. The separation of the voices is particularly enjoyable, as the elements of the mash-ups stand out clearly and the singers get their chance to shine. When it's about dialogue, there are no problems, with the center channel handling the bulk of the work, while the surrounds assist with some atospheric effects and music enhancements. The solid low-end delivery is especially welcome, since it helps hammer home a joke late in the movie that might otherwise be missed.

The Extras
For those who want to get some detail on the making of the film, there are two audio commentaries to check out, first with Moore, Banks and producer Max Handelman, while a second track features producer Paul Brooks. Brooks really focuses on the details of producing a film, talking about many of the decisions during the production, the comparisons to Glee and the value of audience testing, while the trio is more often watching and commenting on what's happening on-screen, and also sharing a few stories from the set and R-rated jokes that were cut. Together, they give a well-rounded look behind the scenes (though Brooks has some trouble filling the run-time on his own.) I can't help but think a track with the girls would have resulted in an all-time epic commentary though, but maybe they can do it for an anniversary release.

With that out of the way, the remainder of the extras focus on delivering more of the movie's spirit, starting with a 3:55 video for Nicki Minaj's "Starships," performed by several of the cast-members, internet a cappella star Mike Tompkins and a host of the film's fans, who submitted their vocals online. Like the film's music, this performance is infectious and fun.

There's a ton of material cut from the film presented in the extras, beginning with 12 deleted and extended scenes (15:38.) Some of this stuff just inflated the film's length, but there's also some explanations for plot points that seemed to just happen in the film, and more with the Treblemakers that's genuinely enjoyable, but which would have taken the focus off the Bellas. At least you get to check it out here. It's joined by a unique set of five scenes (running a combined 19:09) under the label of "Meanwhile..." These pieces expand upon five moments in the film, creating entirely more involved scenes that would have resulted in a much longer film with an entirely different feel, almost like a Mel Brooks or Cannonball Run chaos scene, with tons of activity, characters and jokes swirling around. The extended fight scene between the Treblemakers and an alumni a cappella group is easily the best, and must be seen if only for the interaction between Knapp and Har Mar Superstar (which is why there should be a spin-off following Stacie.)

If her performance in the film didn't make you fall in love with Wilson, or if it did and you just need more, the trio of "Line-O-Rama" entries (12:39) are your next stop, as you get to appreciate her comedic ability thanks to the alternate takes she delivers. There's some gag reel material mixed in with the improvised dialogue, which falls under three categories, basic, dirty and announcers, where Higgins and Banks get to cut loose. I can only hope all a cappella groups warm-up the way they do here.

"Backstage at Barden" is a set of three videos (4:31) that were likely part of the online promotion for the film, with a bio of Benji from the school's campus TV station, and two episodes of "A Cappella Beat," profiles hosted by Banks' character. All three are cute and worth a look. Wrapping up the on-disc content, there are two more promo clips included, "On the Set: Burrito Drive By!" (1:16) which looks at the making of a stunt scene involving Fat Amy and some flying Mexican food, while "A Look Inside" (2:54) is your basic coming-soon piece, with some short cast interviews.

Also included in the set is a code for an Ultraviolet stream/download and a digital copy of the film. 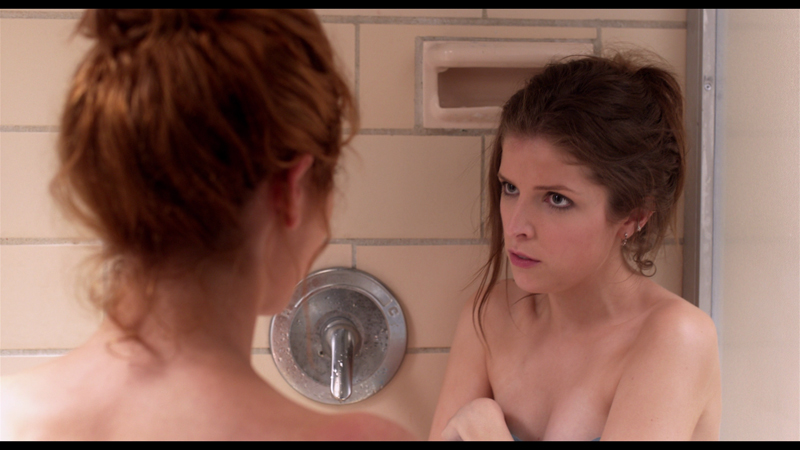 The Bottom Line
Pitch Perfect, despite the title, is not a perfect film, but it is perfectly entertaining, the kind of film you can watch repeatedly, thanks to layers of enjoyable elements, including fantastic musical numbers and hilarious performances. The Blu-Ray only adds to the enjoyment, throwing in a high-quality presentation and a bunch of extras that extend the joy. If you're not morally against enjoying musical comedy, there's no reason you won't enjoy this slice of giddy fun over and over again.