"Anger Management" is a sitcom for the FX cable channel starring Charlie Sheen. A brief note at the end of each episode states that it is based on the movie of the same name, but does not show any resemblance. Sheen plays a character also creatively named Charlie who was once a major-league baseball player but had to leave due to his anger issues. Subsequently he becomes a licensed therapist and begins holding group therapy sessions in his living room for others with anger issues (the primary basis for the show) as well as another group therapy at a nearby prison. Although divorced, he remains in contact with his ex-wife Jennifer (Shawnee Smith) mainly for the sake of their daughter Sam (Daniela Bobadilla), who is said to have OCD (Obsessive-Compulsory Disorder). Charlie also has a female friend named Kate (Selma Blair) who has no-strings-attached sex with him, and separately serves as Charlie's own therapist. 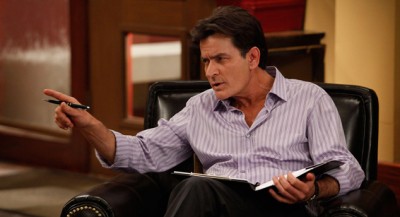 The first ten episodes are presented on two Blu-Ray discs (as of this writing the show has been renewed for at least 90 more episodes). Most of them take place in Charlie's living room where he holds his group therapy sessions. The same patients are present in most of these- a group ranging from a cranky old man to a spoiled young girl. The only thing most of them have in common is that they have anger issues. Charlie's daughter and ex-wife show up in other scenes, where despite being divorced they try to remain supportive parents. Other scenes are with Kate, cracking jokes while having TV-safe sex or in therapy sessions. (The point is made that although sleeping with one's patient is unethical, the two are already friends and they are treating these visits differently.) Only a few episodes involve Charlie's second gig at the prison. Noteworthy episodes include the first titled "Charlie Goes Back to Therapy" where most characters and situations are introduced, and "Charlie Tries Sleep Deprivation" where he keeps his group in session for an extended period of time (providing food and entertainment) in order for them to go without sleep for a number of days and hopefully feel less inhibited about sharing their problems.

Let me say that I know very little about Charlie Sheen's recent "meltdown" (which led to him being fired from the cast of "Two and a Half Men") and have absolutely no opinion on it. Others seem to have been fascinated by that event and this show seems to have been marketed towards those people. Sheen's ex-wife Denise Richards appears in one episode, which apparently was a big deal to his fans. Charlie's father Martin Sheen appears playing the character's father in a later episode, and it is said he will be a recurring character in the future.

With all of that said, I thought the concept of "Anger Management" could have made for a funny comedy series, but it mostly fails here. The main problem is that Charlie really doesn't seem to be a credible therapist. Perhaps patients are drawn to him because of his being a former sports celebrity, but we don't see any sort of background of how he became a therapist and we don't see him being of any real help to his patients other than holding a clipboard during sessions. His personality is quite arrogant also- a real patient would probably become frustrated with him fast and leave. Charlie rarely smiles and delivers all jokes in deadpan form, which sometimes works but mostly gives the impression that his character's life is just one big ordeal.

Likewise we aren't given much background on the patients in the show. Onscreen they don't appear to be particularly "angry" and only a few tell about the events that brought them into therapy. One appears to be there simply because he is gay and therefore fodder for gay jokes. The female patients show a general level of stupidity which makes it difficult to identify or sympathize with them. Charlie's daughter having OCD would have made for some good material, but she doesn't really exhibit that in the few scenes she's in. The only memorable moments with her are using a trashy romance novel to inspire lies about herself to her friends, and posting a racy photo of herself online to make a boy she has a crush on jealous. A lot more should be done with her in future episodes. I will admit that Selma Blair is pretty hot, playing a more intelligent character than her air-headed Cecile in Cruel Intentions.

The largest problem I had with "Anger Management" was that very little of the humor focuses on the show's theme of psychology. During group therapy, most of the jokes are standard sitcom insults about each other's appearances and what-not (such as the gay guy's gayness) which could have been used in any setting. It would have been much more entertaining to either see Charlie give them more straight advice whether good or bad, or have the group members call him out on his less-than-positive personality but none of that happens here. Likewise Charlie's prison group therapy sessions are mostly the same, with a lot of humor drawn from two inmates having a sexual relationship. Getting input from some real therapists who also had a sense of humor (whether good or mean-spirited) would have helped a lot.

I also have to say that being made for a CABLE channel (although it does air on broadcast networks in other countries), there is nothing here that justifies that. Some scenes and humor push conventional TV boundaries a bit, but nothing R-rated. The early promise of cable was to bring us shows that were innovative and different from those on broadcast TV (Showtime's 1980s sketch comedy show "Bizarre" is a personal favorite), but this is just another run-of-the-mill sitcom overall without anything either too risqué or too intellectual for broadcast. In addition, it appears that cable viewers endure NINE MINUTES of commercials during each 30-minute show, as all episodes on the discs run 21 minutes and 30 seconds. To air that many commercials on a broadcast channel is cruel and unusual punishment enough, but to do so on a channel viewers are PAYING to receive is unconscionable. (I could fill an entire article with my reasons for not having cable, and this would be at the top.) I doubt I could have survived watching (and paying for) this show on FX without bringing out my own anger management issues. Even on disc with no commercial breaks the shows feel rushed due to there being such a small amount of time given to them, and the end credits play quickly over the last scene which is a bit distracting, especially during the last episode where an unexpected event occurs. 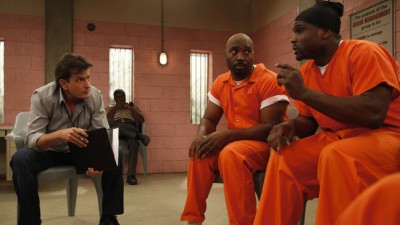 Presented in 1080P high definition at 24 frames per second (it appears to have been shot digitally but I cannot confirm that), and being the first sitcom I have viewed on Blu-Ray disc, "Anger Management" looks infinitely better than it deserves to. Most scenes show incredible detail, including production flaws such as the reflection of studio lights being visible in objects onscreen or the fakeness of set backdrops. My reaction was about the same as when I first viewed a laserdisc of something originally made for TV- the high quality of the medium makes any faults in production value all the more apparent. Yes, I'm fully aware that a TV show's production is not going to go into the same levels of detail as that of a big-budget movie, but here the final result has been given the same level of presentation for better or worse.

Audio is in 5.1 DTS HD Master Audio, but is practically wasted here. Surrounds are silent except for the brief musical score between some scenes. Most dialogue and sound effects are kept in the center channel, with the laugh track only slightly going into the front left and right channels. Although the show was not shot in front of an audience, one was brought into a screening room later to watch the shows and their laughter was recorded there. (Although laugh tracks have annoyed me for some time, I've always been disappointed with how they've been handled ever since stereo came along. They ought to be treated the same as the audience in concert videos generally are and give the audience a feeling of being in that audience, but instead they are mostly lifeless. I remember being especially disappointed back in 1985, having access to an early stereo TV receiver and tuning in to NBC's first week of shows in stereo only for most of them to sound like mono except for theme music.) One particular sonic opportunity is wasted where in one episode a police helicopter flies by Charlie's house but the sound effects there are kept up front. The general sound quality is adequate enough here, although during one scene in the first episode some dialogue appears to 'rattle'. Maybe I'm the only one who will ever notice that.

English subtitles in both standard and "SDH" style are included, as well as Spanish.

Extras are presented in high-definition in 2-channel sound with no subtitles. First is a gag reel, mostly with actors blowing their lines and some set props being damaged. Then there is a featurette titled "Charlie's Baby" where Charlie Sheen and show creator Bruce Helford give their thoughts on the show along with some production footage. "Behind the Couch" shows the actors playing the group therapy members talking about their characters.

The disc opens with a promo for other Lionsgate cable and TV series on disc, followed by a promo for a channel called Epix which promises movies "uncut and commercial-free" (what a concept!) and another promo for the latest season of "Mad Men" on disc. Although these must be chapter-skipped through if your player starts with these, the discs have a memory function so if you last ejected a disc in the middle of an episode it will ask if you want to resume where you left off. You can also select any episode from either disc's menu, and if the chosen show is on the other disc it will let you eject the current one and start the next disc at the selected episode, bypassing the intros and menu. Both discs include a DTS sound check, which is the most action your sound system will get here. 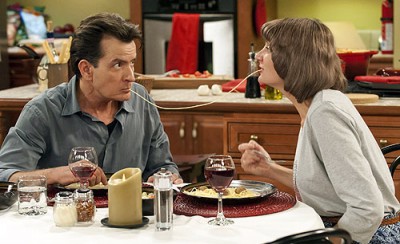 Fans of Charlie Sheen will no doubt want to check this out, and the Blu-Ray disc will give them that in quality far beyond the reaches of cable or satellite (and set them back less money than those options) with the FX channel's screen clutter and commercials stripped away. Those of us who could care less about Charlie's personal life will find little of value here however, and if you view most of the episodes in one sitting you will ponder what great movie you COULD have been watching during that time instead. With 90 more episodes forthcoming there's a chance the show could get more interesting, but we'll just have to see. Now if you'll excuse me, I'm going to go watch Navy Seals...

Pictures in this review were not taken from the Blu-Ray discs.