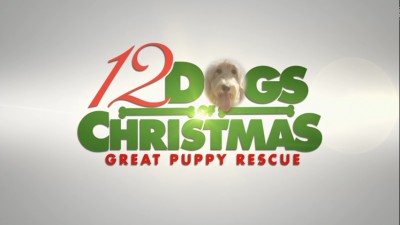 
The Movie
Apparently, this is the sequel to another movie based on a 32-page kids "parody" of the classic The 12 Days of Christmas, which was written by Emma Kragen when she was seven years old. To have mined two feature films from an extended pamphlet is pretty stunning. Having not seen the first one, I wondered what I missed, but this new movie seems to cover the events of that story pretty well before diving into one of the most boring and strange collections of random happenings I've had the misfortune to watch, and at 101 minutes in length, you really feel the ennui.

To explain the plot is to risk descending into madness, but here's a shot. A woman named Emma is returning to her small hometown some time in the mid-20th century, where she's to attend the funeral of a friend's mother (I'm not really sure that's right, but it doesn't really matter.) While in town (which, apparently thanks to the first film's story, is known as the town that hates dogs) an old friend gets into an accident and paralyzed, and the dogs he was responsible for at the dog orphanage (que?) have been accused of having rabies, so they are going to be put down. The orphanage is also going to be sold to the town's richest (and obviously evil, man (Sean Patrick Flanery) so he can turn the land into a dog-racing track. Contrast all of this sadness with the smiling, happy cover art featuring a puppy in a Christmas-tree costume, and there's some serious false-advertising at work. My daughter wanted to watch the film when she saw the cover pups, but the movie would end up putting her in therapy. 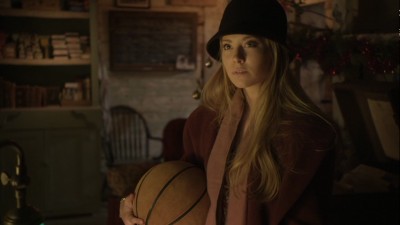 As with all films where a rich evil man is going to get what he wants thanks to the bank (run by D.B. Sweeney, or rather a character he plays) the underdogs, a rag-tag team made up of Emma, the paralyzed guy and an assembly of local dog-lovers, have the chance to save their clubhouse (or school or dog orphanage) if they can raise enough money. So a big show featuring tons of dogs, as well as women dressed as dogs, is put together, and, of course, Bing Crosby is involved, leading up to a finale that exists only to put on a massive musical number, because (spoilers ahead) the movie decides that's just about enough, wrapping up the film is the span of about three lines of dialogue. You'd be forgiven for thinking that while writing the script, Kieth Merrill just ran out of paper and said, "Well, that'll do."

There's a lot about this movie that doesn't make sense, from the lack of real connection to Christmas (I had to go back to look again to make sure the film actually takes place at Christmas-time), to the lack of dogs for most of the movie, to the use of Crosby as a major character, to the spontaneous ending, but the inability or unwillingness to choose a timeframe for the film is its most unusual shortcoming. Seemingly set sometime around 1936 (his "Pennies from Heaven" is the hot song amongst the teens in the film) the movie only embraces that time period in the clothes, cars and lack of modern electronics. Otherwise, you've got super-ripped high school boys, cheerleaders who dance like the Pussycat Dolls, and, in the most ridiculous of anachronistic content, a rapper in the musical finale. Most of the actresses didn't read "1930s" to begin with, but when the phat beats start dropping, the tenuous sense of time-appropriate reality was completely wiped away, along with any chance of this tangled mess redeeming itself. 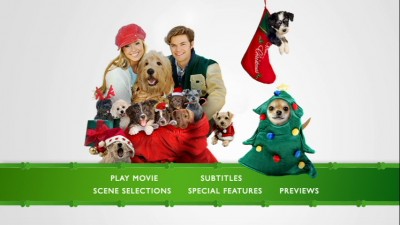 The DVD
This one-disc release arrives in a standard keepcase. The disc has a static anamorphic widescreen main menu, with options to play the film, select scenes, adjust languages and check out the extras. There are no audio options, but subtitles are available in English, English SDH, French and Spanish.

The Quality
The anamorphic widescreen transfer is solid all around, with appropriate color, nice deep black level and a reasonably high level of fine detail. There are also no obvious issues with compression artifacts.

The Dolby Digital 5.1 track brings home clean, distortion-free dialogue via the center channel, and supplements the music in the surround speakers, along with some lignt atmospheric effects. You're not going to notice much in the way of dynamic mixing, but it's a fine delivery overall.

The Extras
Five short featurettes are included, starting with the 1:40 "Behind the Scenes of 12 Dogs of Christmas: Great Puppy Rescue." This looks at three of the folks working on the movie, along with a brief history of the book, but the credits are nearly a fifth of the featurette's length. Slightly longer at 2:48, "The Christmas Finale" focuses on the film's raison d'etre, covering the work that went into producing the complex number via interviews and on-set footage.

"Working with Writer/Director Kieth Merrill" (2:56) shows a bit of how the man works, through interviews with the cast and behind-the-scenes video. The audio could be better, but there's a lot of positivity about collaborating with Merrill. Back to focusing on the production, "The Basketball Game Sequence" (2:32) examines the effort that went into the choreography and sports action in the scene, including talk about the kiss that caps the moment.

The final extra is the 3:47 "What's Your Favorite Dog?" a natural for this DVD, as many of the cast and crew spill the beans on their favorite breeds, giving plenty of opportunities for showing the various dogs on set.

There are also some previews available to watch. 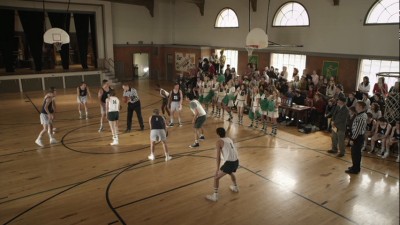 The Bottom Line
Anyone looking for a fun Christmas story with some cute dogs will need to keep looking, because this is more of an intense, but scrambled bit of "let's put on a show" silliness that could have taken place at any point of the calendar outside of the climactic musical number. At least the quality of the presentation is high, and if you happen to like the film, there are actually a few extras to check out. Fans of the previous film may want to give this a look, but be warned, it's not a fuzzy good time.