Mark Of The Devil: Yack Pack

I did use the enclosed vomit bag...but not because of the movie (I think it was the pâté...). Cheezy Flicks Entertainment (please pick a new name) has released Mark of the Devil: Yack Pack, the notorious 1970 torture-porn horror movie from Germany starring Herbert Lom, Udo Kier, Olivera Vuco (Katarina), Reggie Nalder, Herbert Fux, Gaby Fuchs, and Ingeborg Schöner. A perennial drive-in classic that memorably hit ballyhooed exploitation heights when its releasing company handed out vomit bags during its 1972 North American run, Mark of the Devil, no doubt about it, is an unpleasant movie to watch at times. However, you have to give the moviemakers credit: they're not f*cking around here like Hammer and AIP did. Unfortunately, though, Cheezy's transfer is poor, and that faux-vintage barf bag―a beautiful touch, really―doesn't make up for the lack of serious extras that have been found on other releases of this iconic title. 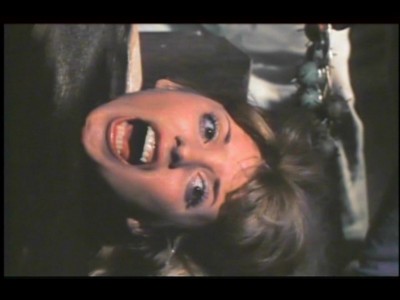 In a secluded Austrian mountain village in the early 18th century, local witchfinder Albino (Reggie Nalder) and his lieutenant, Advocato (Johannes Buzalski), rule through systematic fear, torture, and execution. Women who catch their fancy are raped and then summarily sentenced to death, and any man who opposes them is either threatened with torture or killed outright. The Church has determined that a new man is needed in town, though, and news of the arrival of Lord Cumberland (Herbert Lom), master witchfinder, is met with both anticipation and dread. The initial behavior of his devoted assistant and point man, Count Christian von Meruh (Udo Kier), seems to indicate a more just, fair way of determining just who is or isn't a witch, such as when Christian rescues voluptuous barmaid (is there any other kind?) Vanessa Benedikt (Olivera Vuco), from the spidery clutches of Albino. Soon, though, Christian begins to question his mentor's motivations and indeed, the Church's, when Vanessa is unfairly imprisoned on a trumped-up witchcraft charge. 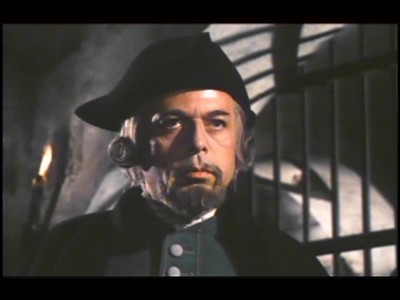 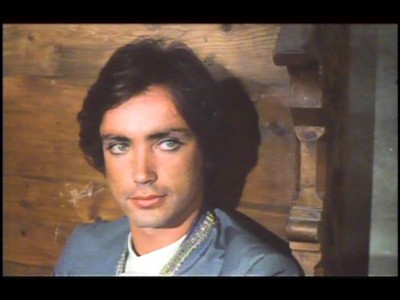 Mark of the Devil is the kind of movie that is always tough to defend or defame. It can put the champion in a very uncomfortable moral position ("You're recommending a movie that revels in torture, you sick piece of garbage?"), while lining up the attacker as a hypocrite ("Oh...according to you, Peckinpah's titillating rape scenes are okay to "enjoy" on an aesthetic level because they're "commenting" on something or other...and besides, you're not really enjoying them, anyway, right? Uh huh..."). Searching for and finding the "valid" aesthetics of a particularly questionable piece will usually smooth over any potential qualms a reviewer may have with a movie's violence, while discretion on the part of a moviemaker or studio―even if the ultimate intent is to still titillize with almost-visualized mayhem and perversion―is always welcomed, too (early Hammer and AIP efforts are good examples of exploitation peddlers who routinely got "passes" for content that, had their stories been completely realized on the screen, minus self-censorship, might have had critics turning up their noses). 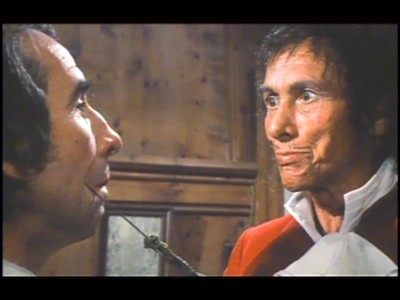 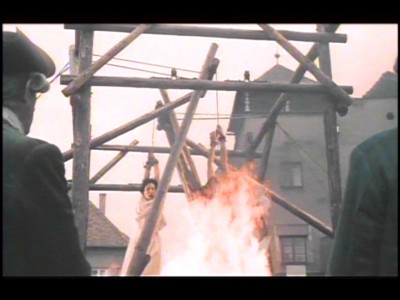 But if you're honest with yourself, then you have to acknowledge that both of the above ameliorations are just that: aesthetic balms based on a fluctuating scale of "taste" that allow us to actually "enjoy" something we're not really supposed enjoy. When I was growing up, movies like Spartacus and The Vikings would often show up on the late, late show. Now, as kids we thought it was cool to see a close-up of a warrior's arm hacked off in the former, and Kirk Douglas' eye ripped out by an falcon in the latter―an adolescent appreciation for sensationalism that's really not too far removed from why little children love their parents to read them fairy tales like Hansel and Gretel (a simple little story about kids being baked in ovens). The stories scared us...but it was ultimately a safe and even reassuring experience because it wasn't really real. It was happening in the pages of a book, or on a movie screen, and then in our imaginations, with Mom and Dad there to say everything was okay in the end. It wasn't happening to us. Certainly movies are no different in terms of being vehicles for fantasies that "safely" end when the lights in the theater come back up. And of course it's not just kids who pleasurably experience violence on the screen the way we did when we laughed at Sean Connery shooting a spear gun into a henchman's stomach ("I think he got the point"); all you have to do is read the rhapsodic, rationalizing appreciations for envelope-pushing movies like Bonnie and Clyde and The Wild Bunch, through art house favorites like Henry: Portrait of a Serial Killer, to the (highly derivative) works of Tarantino, to see high-minded critics searching for and codifying all kinds of reasons to "enjoy" the same level of violence that they would frown upon in a cheap-jack movie like Mark of the Devil. 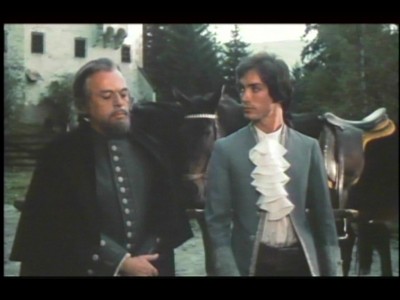 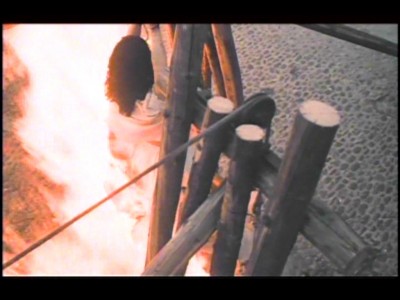 If you just throw Mark of the Devil out as sensationalistic garbage solely because it features sadistic torturing for voyeuristic effect, an effect that makes you feel uncomfortable...then you had better have your bullsh*t meter set to "Zero" if you're making a thumbs-up case for the movies mentioned above (really...isn't this whole argument moot when an Academy Award-winning actor like Anthony Hopkins can cook and eat some dude's brain, in front of him while he's still alive, in a mainstream Hollywood movie?). Movie lovers may not feel "clean" admitting it, but the basic "attraction/repulsion" fascination element of watching Mark of the Devil's most notorious scene―the ripping out of Gaby Fuch's tongue with a pair of tongs―works on exactly the same level as a moviegoer marveling at how beautifully the blood spurted out of William Holden in The Wild Bunch, and how excitingly people burned up in The Towering Inferno, and how spectacularly John Hurt's stomach blowed up real good in Alien. Of course it would be horrible if we were watching these events happen "for real." But of course they're not real, are they? They're just movies. And so on some dark, secret level we don't like to acknowledge or verbalize, they fascinate us―"good" or "bad." 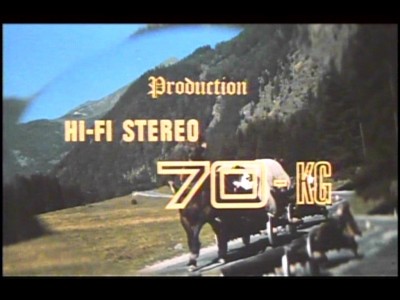 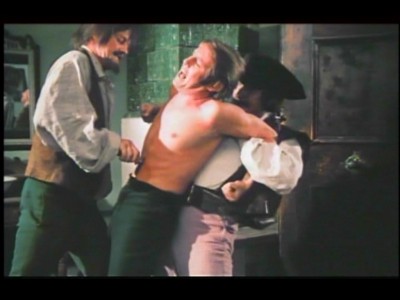 As for Mark of the Devil, its juxtaposition of sex and violence isn't any more egregious in its intent than are most other movies―mainstream or exploitation―just the execution of that juxtaposition goes farther here (every time you see a movie or TV show with a good-looking actor or actress holding and using a gun, you just watched a show that is going for the exact same thing Mark of the Devil is going for: prurient arousal through violence). Where Mark of the Devil gets marks is for at least being honest in its admittedly questionable calculations (for irony on this point, check out that recent video that featured all those faux-sincere Hollywood "useful idiots" decrying gun violence...juxtaposed with clips from their own gun-happy movies). Mark of the Devil isn't screwing around―it's going to show you what the other movies just tease, like it or not. Sure we're conflicted when we're literally wincing at the sight of Gaby Fuchs being stretched on the rack...only to notice how good her naked body looks. That's the moral breaks for this kind of movie: it puts you in a very uncomfortable position that you can squirm about later (...or you can do it the safer Tarantino way: lay on an old Ironside music cue you stole, get some beloved has-been actor to do the knife work, throw in a few jokes, and the critics will wet themselves thinking up superlatives for your torture). 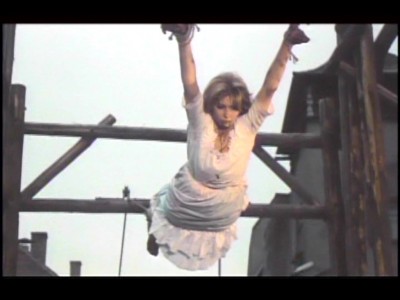 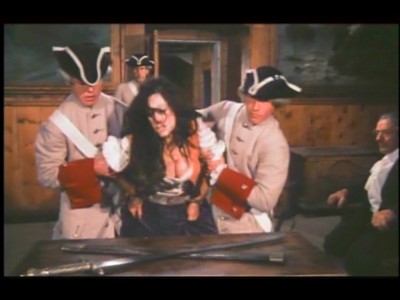 However, where many reviewers find Mark of the Devil's seemingly unending sequences of torture queasy, sensationalistic overkill, I find it relentlessly fatalistic, like a Grimm's Fairey Tale come to horrific life. There's just no escape from this overwhelming feeling of dread and horror and perversion in this movie. Sickening violence is random and unexpected (the lovers who just happen to be in the wrong spot at the wrong time, the stabbing of the nobleman in front of his shocked guests and children), and the torturing doesn't stop, long after we expect it to because of our conditioning from so many other movies we watched, where such things are done discreetly off-camera, and for just a few seconds. We get no relief or respite from the heinous goings-on here. One of Lom's victims, the wealthy Baron Daumer (Michael Maien), is tortured mercilessly, over and over again, far past the point where we think the movie will drop it and move on to someone else, and then as a pay-off, SPOILERS ALERT! he's beheaded at the last moment before help arrives. So much for resolution. Christian, whom we're asked to identify as the movie's "hero," is really just a wishy-washy enabler of Lom's torture, who takes forever to morally evolve...only to ironically get his just desserts (after "saving" the Baron and releasing Vanessa) from the maurading―and now torturing―townspeople, while Lom escapes scot-free. Sure the movie is choppy and badly-directed at times (it possibly had two directors: Michael Armstrong and Adrian Hoven, who also wrangled over the script), with silly, anachronistic dubbed-in dialogue ("I'll bet he's not so horny now!" a townsperson screams when a convicted priest is tarred and feathered). But if you want your fairy tales with an unfettered, utterly relentless sense of nightmarish horror, Mark of the Devil is tough to beat. 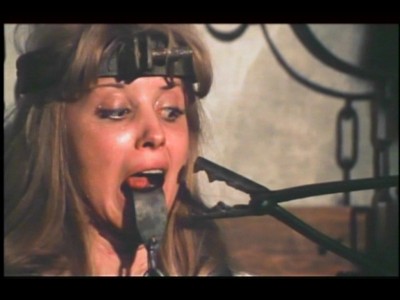 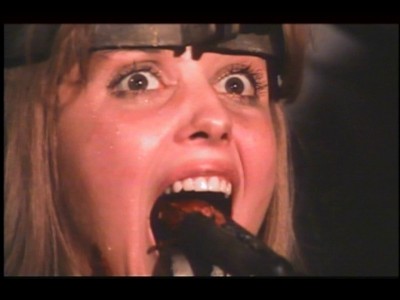 The Video:
I don't own the 2004 Blue Underground release of Mark of the Devil, but I saw it when it came out, and I remember it sporting a much cleaner, brighter, and more colorful transfer than the one I'm seeing here from Cheezy. This flat, oddly-shaped 1.46:1 transfer looks like a bad VHS dub, with washed out colors, a soft, fuzzy image, and lots of video noise.

The Audio:
Just as bad is the English mono audio track, re-recorded here at a level so low I had to put on the phones and jack up the sound almost to the limit. Lots of hiss, too. No subtitles or closed-captions.

The Extras:
A couple of multi-generation transfers of drive-in related ephemera are included. Trailers for I Drink Your Blood and Horror of the Black Museum are here, along with a filmed spot of Julie Andrews introducing the new MPAA seal of approval (funny joke with this particular title). Then there are drive-in spots for Bernz-O-Matic® propane in-car heaters (have one proudly hanging and ready to explode in my office as I type this), James River Smithfield Barbeque (delicious), and a generic spot for buying hamburgers at the concession stand. Oh, and that barf bag. Very nice.

Final Thoughts:
If you're indignant about Mark of the Devil having someone's tongue being pulled out in close-up, just remember that the year before, Dennis Hopper had his fingers chopped off in full Vienna-sausage-flying glory in that G-rated, Oscar-winning John Wayne family picture, True Grit. Don't feel so superior and self-righteous now, do you? Because of, not despite, its horrific torture scenes (which, truth be told, are not nearly as bad as the garbage they have out today), Mark of the Devil just grinds on and on with its relentless nightmare of hopeless witch trials in 18th century Austria, creating a nasty, downbeat fairy tale that's still rather unpleasant in its impact. Too bad the same can't be said for Cheesy's transfer and bonuses here. The movie is first-rate, unsettling horror...but skip this particular Yack Pack version.